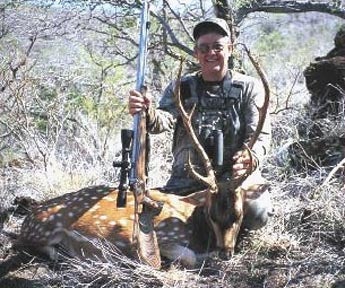 Since I’m in the process of hunting deer in all 50 states, Hawaii required a visit. I had no idea what to expect from the terrain, the vegetation, the climate or the animals.

I quickly learned that Axis deer are Hawaii’s primary deer species, although there are also small herds of blacktails. Tony Knight would be my companion, and we’d hunt Molokai Island. For history buffs, this was the island to which lepers were taken long ago.

We employed the services of Pat Fisher, who is one of the top outfitters in Hawaii. Joey Joao, a native Hawaiian, would go along as a guide. Since Tony Knight invented the in-line muzzleloader, we’d be using his Knight rifles, of course, both .54-caliber.

Axis deer are lovely animals, with white spots on a light brown coat. Practically every mature buck has three points. Trophies have more mass, longer tines and a longer beam. Additional points are rare. These are free-ranging deer that wander about in an arid, hilly region with plenty of rocks, canyons and thorny bushes. We quickly learned that there’s an abundance of deer, and that they’re elusive.

Axis Ambush
At first, the four of us tried some glassing, and we soon spotted a number of animals bedded among sparse trees. None looked interesting at the outset, so we broke up and hunted in pairs. Knight hunted with Joao while I went with Fisher.

Soon afterward, Fisher and I saw a dandy buck. He appeared to have good mass and length, but our stalking efforts were in vain-the wind switched and betrayed our approach.

Fisher told me that the animals have a behavior pattern that lends itself well to an ambush. Each morning, herds of animals slowly move from open feeding areas in lower valleys up to heavy pockets of vegetation, where they bed for the day. In the afternoon they reverse their travel, drifting from the trees down to more open country. Knowing these daily routes, it’s possible to intercept them along the way.

There was about an hour of light left when Fisher and I set up on a bluff where we’d have a good vantage point. From there he expected to see several herds of animals, but we would have to move quickly to close for an ambush.

We saw the first Axis deer soon after we were settled. A herd of about 30 animals moved down a canyon, but Fisher wasn’t taken with any of the bucks. We watched as they filtered out of the trees and soon saw another herd. Fisher liked one of the bucks, so we quickly dropped out of sight and made a circle to head them off.

The plan worked, but when we got closer, Fisher decided the buck wasn’t as good as he thought. The next morning, Fisher and I worked our way through the canyons, looking for deer traveling out of the open areas. We saw several bunches, and a few bucks looked very good, but we couldn’t get on them quickly enough. By noon we had hiked a couple of miles and had seen a few other good bucks, but still we were unable to maneuver within muzzleloader range.

Knight fared better. About noon, Fisher and I met up with him and Joao just as Knight was about to lower the boom on a buck about 125 yards away. Knowing Knight’s amazing shooting ability, there was no doubt this deer was in big trouble.

And it was. When the smoke cleared, a fine Axis deer belonged to Knight. The buck looked great from a distance, and it was even prettier up close.

Last-Light Deer
My turn came the next afternoon. Fisher and I walked at least 5 miles that day, sneaking up on several deer, but we were unable to find what we wanted. Finally, toward the end of shooting light, we spotted a herd of at least 50 animals moving down a canyon. Sneaking as close as we dared, Fisher pointed out the best buck, and I took him at 80 yards with the disc muzzleloading rifle.

Our Hawaiian hunt was history, and I was impressed with the pro-hunting attitudes of locals. Nowhere ddid I hear any negative comments about hunting, even in Honolulu, where tourists abounded. I’ll go back to the islands in a heartbeat. There are plenty of other species besides Axis deer that need some attention.