Know what to look for when the snow piles up. 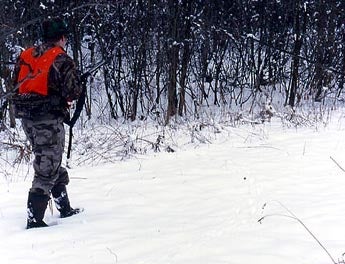 A scenic, wooded landscape covered with a fluffy coating of fresh snow represents the perfect tracking conditions for Midwestern whitetails. Brothers Terry and Jerry Weigold, of Marquette, Mich., are expert snow trackers who hunt in the big, remote woods near their homes. They’ve tagged 25 bucks that qualify for various record books. The Weigolds like to scout as much as possible before the season in search of trophy-class bucks. They look for signs like large rubs, big scrapes and, of course, deep tracks. “You have to find a big buck before you can hunt him,” says Terry Weigold.

To be a successful snow tracker, you must be able to differentiate between the tracks of a mature buck and those left by the rest of the herd. Hooves that are longer than 3 inches, accompanied by a stride of over 20 inches, indicate the tracks of a large deer. Big deer are generally represented by big tracks, but not always. Terry once took a huge 12-point buck that weighed 232 pounds after being dressed. He says, “That buck had small feet, but I knew he was a big bruiser by how far his hooves sank into the snow.”

There are two surefire ways to tell a buck’s tracks from a doe’s tracks. A buck’s hind hooves will track inside his front hooves. A doe, with her wider posterior, is just the opposite. Also, a buck’s toes point outward as he walks. “Even a button buck walks like a duck,” says Terry.

Go Remote
Many trackers drive roads and trails with vehicles or ATVs to locate fresh tracks. The Weigolds, on the other hand, rely on their feet to search for monster bucks. “We simply hunt remote areas where big bucks are known to live,” says Terry. “Our hunting areas are so hard to reach that pressure from other hunters is taken out of the equation. We look for terrain with lots of canyons and hills.”

In order to track down a mature buck, conditions must be nearly ideal. Fresh snow or wet snow is key to a stealthy hunt. Add a little wind into the mix and it’s time to go find a buck’s tracks.

“We like to follow a buck’s tracks off to the side as far as possible,” says Terry. “A mature buck will often stop and look back at his trail. If you’re off to the side, sneaking up on him is much easier. This is especially true of highland bucks. When a buck nears the top of a hill or ridge, he almost always looks back. That’s a prime time to drop him.”

Your tracking cadence should mimic the movements of the buck. “If a buck is taking long strides, you need to pick up the pace. Likewise, if a buck’s strides shorten, you should slow down,” says Terry. “If you jump a buck, it will usually run flat out for three hundred yards or so, then it will sometimes stop and look back.

“I try my best to keep up with a freshly jumped buck and try to catch him when he looks back. With rutting bucks on the move, it’s often a footrace; preseason exercise is critical to success. I once ran after a buck for nine straight hours before catching up with him and dropping him with my .30/06.”

But to the Weigolds, the effort is worth it. “Despite the challenges, snow-tracking is my favorite way to hunt deer,” says Terry.