How to get a top-notch coonhound on the first try. 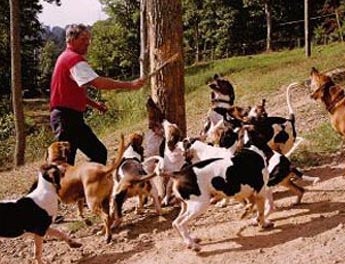 Success comes from focusing on what really works, not gambling on getting one good tree hound out of many pups tried.” So says Jerry Shaffer, the nationally known Charleston, W.Va., coonhound trainer, and what he means by what works, of course, is a pup from a proven mating. But results from a repeated proven mating of his own hounds revealed to Shaffer how much the best genes in a selected breed can be enhanced by changes in training. While pups from the first litter became excellent coonhounds, those from the second litter started earlier, took direction better, learned faster and became superior hunters at an earlier age.

The difference? For starters, with the second litter Shaffer hunted the dam in the last third of pregnancy so the pups could begin life with greater enthusiasm for the chase, and apparently all did. But the most dramatic change took place when Jerry’s wife, Yvonne, insisted on having the pups from this litter in the house, where she could take better care of them.

In retrospect, it makes sense that early and constant association with kind and affectionate humans would develop a more complete acceptance and trust far more quickly than kennel contact would. It follows that these pups would take direction more easily and start earlier because their trust had not been violated and they had no reason to fear. And taking direction well certainly makes a faster learner. Trusting pups pay attention more naturally, and in the process become superior hunters at an earlier age. In some ways it reminds me of how my home-schooled grandson’s mind was carefully, kindly challenged. Today, at 20, he has a master’s degree in microbiology.

I saw Shaffer’s “home-schooled” litter when the pups had become too big to live together in the house and had been moved to the kennel. Shaffer opened the kennel, walked out on the lawn and clapped his hands, and all the dogs came running to their pack leader. He led them to a dead tree where he had placed a caged coon, pretended to paw up it, rapped the trunk with a slab of bark and had his Walkers and some clients’ pups enthusiastically barking treed. Earlier, their treeing instincts had been awakened by the example of an experienced hound.

The next step would be running free in Shaffer’s 100-acre enclosure to tree squirrels with a trained dog. Once started, they’d hunt by themselves to develop self-reliance-two at a time, if possible, since they’re bolder in a pack.

Finally, the squirrel process would be repeated on coons at night-starting with raccoons eating at a feeder in an 11-acre enclosure and finishing in the large enclosure. If you don’t have ideal training grounds (where young hounds can find a coon every time out), call Shaffer at 304-965-6824.