Tune in to the timberdoodle's schedule for better shooting. 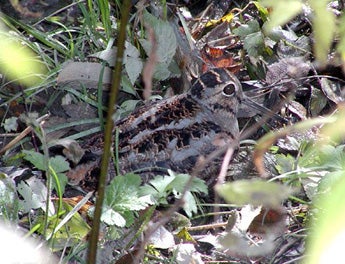 Woodcock hunters are forever trying to be in the right place at the right time. Too often, we find that the resident timberdoodles have already departed and the ones migrating from the north haven’t arrived yet. The white splashes of woodcock poop on the ground often indicate only that a hunter should have been there yesterday. At times like these, the woodcock might seem like a rare bird indeed, but it isn’t. There are a few million woodcock in the United States, most of them flitting around east of the Mississippi.

If you’re in the right places, woodcock can seem as numerous as robins. In fact, survey evidence indicates that woodcock and robins migrate south about the same time. That’s probably no small coincidence, since both birds feed heavily on earthworms. So if you can still see a robin or two in your backyard, figure there are a few woodcock around, too, and hunt the right combinations of habitat for them. Woodcock territory overlaps considerably with ruffed grouse cover. In fact, woodcock might be found everywhere grouse live. But there are areas that woodcock call home-at least temporarily-where you’ll hardly ever see a grouse, such as deep alder runs and along the edges of muddy cornfields.

Where To Look
Some of the best places to hunt for woodcock in the northeast are under dogwood and viburnum shrubs. They produce a protective low-growth canopy, explains Tim Post, upland game bird biologist for New York’s Department of Environmental Conservation and an avid hunter.

The viburnum is favored only if it appears in scattered clumps; once it completely takes over a field, even woodcock can’t get through the “umbrella” it forms. The autumn leaves of several species of these head-high shrubs are a rich red color, making them easy to spot from a distance. The sun-sheltered, loamy ground underneath is usually bare of grasses. It’s here in safe seclusion that woodcock can probe the ground with their long beaks to catch the earthworms that make up most of their diet.

Small patches of bright yellow goldenrod, if adjacent to these tall red-leafed shrubs, provide a similar shelter on the ground, as well as a supply of worms and small beetles underneath. Goldenrod isn’t widely recognized as woodcock cover, but it usually has an open stem growth at ground level that provides room for woodcock to walk about completely unseen. Goldenrod and several of these shrubs grow in most of the Eastern United States, all the way to Louisiana.

Woodcock are also found in a wide variety of other habitats, especially old, overgrown pastures and regenerating clear-cuts where hawthorn trees, poplar (aspen) and birch saplings help to screen out the hawks and owls. Mark Banker, regional biologist for the Ruffed Grouse Society, reports that woodcock are making great use of dense oak and sweetgum saplings in clear-cuts in northeastern Alabama, and most likely use the same habitat in Georgia and South Carolina.

[pagebreak] Zeroing In
Even if you put everything together and succeed at being in the right habitat at the right time, there’s no guarantee that you’ll find woodcock there. Woodcock are mysteriously drawn to certain specific locations; for example, most woodcock return each spring to the same place where they were hatched. Although one patch of cover can be highly productive year after year, that “great-looking spot just down the road” might never, ever hold a single timberdoodle. So, how do you find out where the right places are? You start walking, and take a dog-it’s next to impossible to hunt woodcock without one. Dogless bird hunters will only occasionally blunder close enough to a ‘doodle to flush it by themselves.

I prefer to hunt with my English pointers these days, but I have also enjoyed good shooting at various times with a couple of “birdy” beagles, as well as a Labrador retriever. When I was a younger fellow, I discovered that e family dachshund mongrel would trail and flush woodcock with total dedication to the game. Yes, she trailed them. It once was thought that woodcock sat tight until forced to fly, but more recent research and hunter observation suggests that these squat little birds will hike ahead of a dog through the undergrowth like wind-up toys. Any dog, including your pot-licker, that has a hunting instinct and will stay within reasonably close range in heavy cover might qualify for the exalted status of “woodcock dog.” By the way, as its name indicates, the cocker spaniel breed was originally developed just for woodcock.

When To Hunt
Woodcock seasons are timed to bracket the expected annual dates of the woodcock migration for various states. The migration begins when cold weather pushes large numbers of flight birds out of Canada and the Northern states. In the Great Lakes states and central New England, the peak hunting occurs around the middle of October, when the migrants have arrived and the resident birds are still there.

Southern states have progressively later seasons, and it usually takes nearly two months for the slow-paced migration to end. Incidentally, resident birds below the Mason-Dixon Line often lag behind, not leaving their home grounds until after their northernmost cousins have gone on ahead. By the way, there’s no difference in the sizes of migrating birds versus resident birds. The larger woodcock with the longer beaks (longer than the width of a dollar bill) are usually the females.

If you have a general overview of the prevailing weather patterns on a national basis, you’ll have an advantage. An early snowfall and freezing temperatures north of you can, for example, initiate an early migration of ‘doodles in your direction. Also, a favorable southerly wind will provide a free ride to woodcock, which, with their short, stubby wings, can use all the help they can get. Information about storm fronts, temperatures and wind direction are available on several free Web sites, such as www.weather.com.

[pagebreak] A drastic change for the worse in a weather pattern for the Eastern U.S. could abruptly shorten the woodcock migration, which means that for a few short days, the hunting could be fabulous where you are-or very bad. Woodcock migrate only at night, usually departing around 10 or 11 p.m. and flying only 50 feet off the ground. They migrate in small flocks and sometimes they even go it alone. They might cover 20 miles in one night, or 100 or more miles, or maybe only a mile or less. In other words, they follow no particular timetable.

If you hunt a favorite place and find that it appears to be suddenly empty of woodcock, consider whether it was windy the night before; if so, drive a short distance in the direction the wind was blowing and you might catch up with your birds in the next good cover. During the autumn hunting season, you’ll seldom see a woodcock in flight unless you flush it. Woodcock don’t fly around during the day like robins; they’re basically ground birds, and when you do flush them they seldom fly more than 50 to 100 yards. Yet they migrate up to 2,000 miles. Go figure.

Following the Trail
Todd Fearer, a wildlife researcher at Virginia Tech and a specialist in analyzing migration patterns, has an explanation why we sometimes see woodcock where they’re not supposed to be. It’s because the birds often take the side roads! There are three main migration routes: two run to the east and west of the Appalachians; the third traces the Mississippi river basin. The migrating woodcock generally follow geographic and landscape features such as mountains, coastlines and rivers, to the extent that these features are favorable to wind direction, the right habitats along the way, and so on. But woodcock are found all over the Eastern states, not just along the major flyways.

Fearer believes the birds follow the main routes to a certain point in spring, and then veer off to their own summer breeding grounds. In the autumn they backtrack, taking the same shortest routes that get them to the nearest flyway. What this means to the dedicated woodcock hunter is that resident woodcock don’t necessarily migrate “south,” but instead toward the nearest of the three major flyways. So you should probably be keeping an eye on the weather patterns directly opposite the direction of the flyway nearest you.

Or you could just not worry about it, go hunting and have a good time. Don’t forget the dog. birds follow the main routes to a certain point in spring, and then veer off to their own summer breeding grounds. In the autumn they backtrack, taking the same shortest routes that get them to the nearest flyway. What this means to the dedicated woodcock hunter is that resident woodcock don’t necessarily migrate “south,” but instead toward the nearest of the three major flyways. So you should probably be keeping an eye on the weather patterns directly opposite the direction of the flyway nearest you.

Or you could just not worry about it, go hunting and have a good time. Don’t forget the dog.