Find the food, and you'll find the birds. 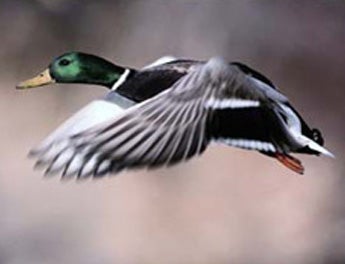 Among the ingredients for a successful waterfowl hunt, the most important is food. If you locate the ducks’ food sources, chances are you’ll locate the birds. The problem is, many hunters can name only two basic foods: corn and rice. And if you find corn in public waters, it has probably been placed there illegally. This guide will help you identify the wild vegetation ducks eat while migrating. Scout out these natural food plots, and you’ll soon be looking at your next brace of birds.

First and foremost, ducks are remarkably adaptable in what they eat as they travel the flyways. One stop along their migratory route might have river bulrush and another smartweed. According to researcher Victor Ramey at the University of Florida’s Center for Aquatic and Invasive Plants, seasonal food preference is common among ducks. Teal, for instance, eat primarily gnats and snails during nesting season but prefer plant seeds when migrating. A study of Wisconsin redhead ducks found that they eat 34 crustacean and insect species and 30 plant species. Louisiana canvasbacks were found to eat primarily grasses, sedges and rushes. Yet another canvasback study, in Maryland, showed they eat mostly widgeon grass. Consider the nutrition pyramid that we humans try to eat by. There are several types of food on it, but the bulk of our intake comes from the bottom category. For us it’s breads, cereals and rice; for ducks it’s aquatic grasses or insects.

Food Groups
Fortunately for hunters, there’s plenty of overlap among the food preferences of different ducks. For instance, a choice wild rice patch that draws mallards is also likely to attract other birds, such as pintails, teal, canvasbacks and ringnecks. Wild rice is an important waterfowl food; biologists report that ducks eat it at every stage of their growth, with almost all of them feeding on its ripe grain. Sago pond weed, another important waterfowl plant, is widely believed to produce more food for ducks than any other species of aquatic plant. Geese, ducks and swans feed on sago seeds, tubers and roots. Another universal grass is smartweed. It produces abundant small, black seeds that mallards, black ducks, pintails and teal love to eat. Because the seeds are so small, smartweed can attract ducks for long periods before all the seeds are consumed.

In some areas, non-native aquatic plants have displaced much native vegetation important to waterfowl. In the South, for example, hydrilla has choked many lakes and rivers, covering traditional waterfowl foods. But ducks have adapted and they now relish hydrilla-not because they prefer it to native plants, but because it’s readily available. Choosing Cuisine
Hunters should know that puddle ducks and diving ducks often eat different foods due to their biological differences. A puddle duck feeds on the surface or close to it by tipping over with its tail in the air. It dines chiefly in shallow water, on the fringes of marshes and on dry land. Its diet is mostly vegetable matter, consisting of seeds, grass, aquatic plant leaves and stems, agricultural crops, acorns and other nuts, and some shellfish, insects and small fish.

Diving ducks, on the other hand, dive completely underwater and eat a wide variety of plants and animals found near the bottoms of large rivers, lakes and sounds. A large percentage of the diet of many divers consists of mollusks, crustaceans and fish. But divers, like canvasbacks, can be vegetarians, relishing wild celery. It would be logical to think that most of the vegetation divers eat is submerged, but it’s not always true. Thirty percent of the redhead duck’s diet is vegetation, and most of it is emergent plants, according to a North Dakota study.

Learning to identify choice duck foods is important for successful waterfowling. A stand of wild celery and bulrush, or an area of a pond covered in duckweed and coontail, will point you toward a new honey hole.