Late-season hunts can be worth your time and effort. You just have to know where to look. 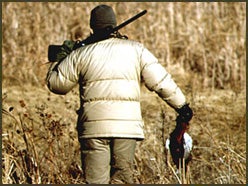 The pheasant season opener is marked with temperate weather conditions, foolish birds and unfortunately large crowds. As those warm autumn days fade, so do the birds. Only the wise roosters remain. Thankfully, the crowds also drift off, leaving serious wing-shooters with a fair, if not favorable trade: fewer birds for fewer hunters.

Good winter cover is very different from good opening-day cover. Prairie grass is no longer suitable protection, even if the grass is still standing. The birds need something more substantial, such as woody cover or cattails.

** Woody Cover**
“When there’s a lot of snow and cold temperatures, look for woody cover,” says Kirshenmann. “I like to call it woody cover rather than shelterbelts because you’re looking for growth that provides cover low to the ground.”

Cedars, juniper, rows of lilacs and wild growing thickets are all good examples of woody cover. Fencerows with plum thickets can be hot spots in winter. Whether it’s natural brush or a planted shelterbelt, focus on cover that is at least 12 rows deep.

Additionally, quality woody cover is useless to birds if it’s not located near a food source. Food plots of corn, sorghum and the like are often scattered across state-managed tracts. If you’re hunting private lands, look for agricultural fields with waste grain. Corn and sunflowers are two regional favorites.

“In South Dakota, when we have really bad weather and the food is covered up, birds will migrate closer to farmsteads, where grain may be more readily available,” says Kirshenmann. “I’ve seen hundreds of birds concentrated in these areas.” Hunting too close to a farmstead might be unsafe. But if you can find woody cover close, but not too close, you should find plenty of birds. Hunting thickets and dense brush near fields or farmsteads can be difficult for lone hunters, since the birds can hear you as you move. The best way to approach woody cover is with a set of drivers and blockers. This allows you to block most of the escape routes, forcing the birds to the air.

Pounding Cattails
If you prefer to hunt by yourself or with a single partner, turn your attention to cattails, which also protect winter pheasants. In fact, during the late season, Kirshenmann spends 99 percent of his time probing cattails. He prefers the smaller plots ranging in size from 1 to 5 acres. Larger plots also will hold birds, but they are more difficult for one or two hunters to work. Drivers and blockers often are needed for expansive cattail cover.

“I look for marshes where open or frozen water is surrounded by a cattail ring,” says Kirshenmann. “A thirty- to forty-foot-wide ring is ideal.”

One person can walk along the inner edge of the ring while the other walks the perimeter. Leave the cattail busting to a strong, energetic dog. Kirshenmann notes that during particularly harsh winter conditions even cattails can become choked with snow. When this happens he focuses on the thick woody cover described above. That’s the only place the birds can go to survive.

Late-Season Loads
How many times have you heard that during the late season you should tote a 12-gauge with high brass shells so that you can reach jumpy birds? While it’s true that late-season pheasants are more wary, it’s not necessarily true that you need more gun. Many hunters I know, including Kirshenmann, hit plenty of late- season ringnecks with the same 20-gauge shotgun they carried during early-season hunts.

As Kirshenmann mentioned, roosters will often sit tight in heavy cover during cold, windy days. This translates into plenty of close shots.

While Kirshenmann remains loyal to his 20-gauge bore, he switches from a No. 5 or 6 shot to a No. 4 later in the season. The No. 4s give him a little more knockdown power for those few birds that don’t follow the rules.

Midwest Destinations
Many hunters believe that public-land birds are shot out by winter. That simply isn’t true. I have taken several December birds at 2,000-acre public sites that have been known to host more than 200 hunters on opening day.

Going into this season, Iowa hunters were looking forward to one of their best pheasant seasons in many years. According to biologists, the best counts were in the northwestern part of the state, where roadside counts were up 73 percent-the third-highest ever.

This should also be a banner year for South Dakota. Spring surveys indicated that the pheasant population more than doubled over last year’s counts. Biologists point hunters to walk-in areas found within the traditional pheasant belt located between the Missouri River and the state’s eastern border. A copy of the South Dakota Hunting Atlas, which shows not only walk-in areas leased by the state but also federal and state- managed areas, is a valuable tool. Contact: South Dakota GFP, 605-773-3485.

As in South Dakota and Iowa, Nebraska’s pheasant numbers have drastically improved: Statewide numbers were up 65 percent. The highest densities can be found in the southwestern counties of Dundy, Kearney, Perkins and Red Willow and the northeastern counties of Cedar, Dixon, Nance, Stanton and Wayne. Stanton’s 1,523-acre Wood Duck Wildlife Management Area is worth a look this winter. Hunters may find a late-season bird or two hiding in the cattail sloughs. Contact: Nebraska Game and Parks, Norfolk office, 402-370-3374.

Kansas hunters should take advantage of the 975,000 acres of private lands enrolled in the Kansas Walk-In program. Traditional hot spots include the northwest and north-central regions of the state. Contact: Kansas DWP, 620-672-5911.