Bitter weather or not, now is the time to hunt ruffs. 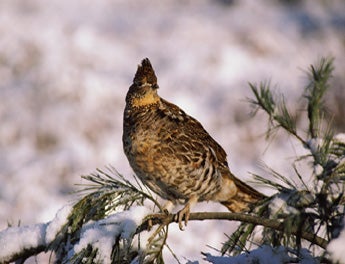 The great conservationist Aldo Leopold once said, “There are two times to hunt ruffed grouse: ordinary times, and the second week of October.” The glory of autumn might inspire such poetic outbursts, but some terrific and overlooked grouse hunting awaits the hunter who braves the chill of winter, too. Moreover, the winter woods have their own special beauty.

Winter demands adaptability, since grouse location changes with the seasons. Coverts that held birds before Halloween might be barren after Thanksgiving, or vice versa. This is particularly true in the bird’s northern range, where the change from autumn to winter is most dramatic.

To find winter grouse, focus your search on the bird’s two most crucial winter needs: warmth and food.

Where Ruffs Keep Warm
In areas where the level snow depth exceeds 10 inches, grouse will fly directly into drifted snowbanks for the night. Tunneled inside the snow, they enjoy a comfy microclimate that conserves their body heat. If overnight temperatures dip very low, grouse might emerge for only a few hours each day to forage, usually during late morning or midday. In such conditions, hunting in early morning or late evening is often a waste of time. In heavy snow and severe cold, do your hunting between 9:30 a.m. and 2 p.m.

If snow is not deep enough to create “grouse igloos,” but temperatures remain cold, grouse might spend the night among dense coniferous trees, such as cedar, spruce or fir. With little or no snow on the ground, an early-morning hunt through an isolated conifer stand can be highly productive. It’s probably best not to hunt grouse past mid-afternoon in such conditions, to give the birds plenty of time to settle into appropriate cover for the night.

Brush piles also provide good winter shelter for grouse, especially after a damp snowfall roofs them in. Two seasons ago my spaniel flushed three December grouse from a single pile of brush. I bagged one and missed another. Barely 15 feet across, the snow-covered brush pile had resulted from storm damage to one of my favorite coverts. The fallen tree branches became a cozy fortress for winter grouse. Judging from the sign beneath the pile, the birds had spent considerable time there.

What Grouse Eat in Winter
Throughout the Northeast and upper Midwest, the dormant buds of mature male aspen (“popple”) and birch trees make up the bulk of a grouse’s winter diet. Highbush cranberry is another northern favorite, since berries might remain on its twigs through winter. To conserve their energy, the birds often select feeding areas near their overnight roosts. Areas where mature aspen or birch overlaps with snowbanks, conifers, or storm damage will hold grouse nearby. Don’t forget to look up, as grouse will perch high in aspen trees to eat buds. If your dog acts birdy but can’t locate the bird, it might be “budding” right over your head. In the southern Appalachians, grouse eat hop hornbeam buds, mountain laurel, white oak acorns, clover, hazelnuts, sumac berries, and even dried-up wild grape, teaberry and greenbrier. Many of these species are concentrated along stream courses, logging roads or meadow edges.

Wherever grouse habitat adjoins farmland, don’t be surprised to find grouse on the forested edges of corn stubble fields. Corn is high-octane winter fodder, and grouse will utilize it whenever possible.

Explore All Possibilities
Finally, remain teachable. On New Year’s Eve last year in Minnesota, I wasn’t finding grouse where they should have been. I flushed two grouse in an unexpected place, killed one and opened its crop. The bird was stuffed with dime-sized crab apples it had scrounged up. I inspectted the area of the flush, and saw where grouse had excavated them from the snow. I located other crab apple trees and flushed more grouse. Find such cover types and foods, and you’ll find grouse long after the colorful pageant of autumn ends.

[pagebreak] Long-Range Loads
By December the leaves have fallen and grouse have already passed at least two months of human-avoidance training. Consequently, shots on winter grouse are typically longer than in fall. Birds are also more densely feathered at this time of year. I like a 20-gauge double with skeet and improved-cylinder chokes for cold-weather hunts. If forced to pick just one choke for winter, I’d go with improved. Although ½ ounce of No. 8 shot is adequate for fall, I like at least 7/8 ounce of hard No. 7½ for winter. I’ve grown especially fond of Federal’s copper-plated Wing-Shok series, which patterns well and kills like a lightning bolt.

If you have a classic shotgun choked tighter than improved, and don’t want to alter it, try Polywad’s ingenious Spred-R loads. Some of my hunting buddies and I have obtained grouse-appropriate patterns from guns choked modified and full with the Spred-R. (polywad.com; 800-998-0669)

Hot Spots for Winter Grouse
Much of the nation’s best grouse hunting occurs on public lands. Indeed, that’s one of the things I love most about this bird. Look for ruffs on these hunting grounds.

IDAHO: Grouse can be found in Douglas fir habitat throughout the Panhandle region on abundant U. S. Forest Service lands. For a change of pace, however, look for them on the sprawling Cecil D. Andrus WMA off Highway 71 northwest of Cambridge. Andrus offers a rare opportunity to combine grouse hunting with good gunning for valley quail, chukars, and Huns. Look for grouse along moist stream corridors and in aspen pockets in the Camp Creek drainage, which is located in the southeast corner of the WMA. You’ll bump into the other species along the way. For maps and access information, call the WMA office (208-257-3363).

WISCONSIN: The grouse population cycle is on the rise, and Wisconsin has no shortage of public lands with good grouse hunting. For starters, try the excellent Central Wisconsin Conservation Area, east of Black River Falls. For maps and hunting information, call the Wisconsin DNR Black River Falls office (715-284-1400).

MICHIGAN’S U.P.: More than 2 million acres of timber company lands are open to public hunting, thanks to the state’s Commercial Forest Act (CFA), which gives private forest managers a property tax discount in exchange for public hunting and fishing access. For grouse, focus on managed aspen forests in Dickinson, Iron and Ontonagon counties. These properties are unmarked and require some sleuthing to find them. Start your homework by calling the Michigan DNR field office in Marquette (906-228-6561).

WEST VIRGINIA: Grouse hunters can roam the laurel thickets, logging roads and stream courses of the 23,000-acre Sleepy Creek WMA. Located in the eastern part of the state near Berkeley Springs, this WMA has numerous areas managed for ruffed grouse. This is steep country, so come prepared for tough hikes. For maps and other information, call the nearest West Virginia DNR office (304-822-3551).

TENNESSEE: Head for the Tellico Unit of the Cherokee National Forest. Concentrate on areas with an elevation greater than 2,000 feet. For maps and hunting information, call the Forest Service office (423-476-9700).

VERMONT: Check out the Green Mountain National Forest near Rutland. At almost 400,000 acres, this area is enormous, though not all of it holds grouse. Certain areas are managed for ruffed grouse habitat. To find them, start by contacting the Forest Service office (802-747-6700).