Chasing snowshoe hares is a sure cure for cabin fever. Beat the cold and bag a few rabbits this winter with the right gear and the top tactics. 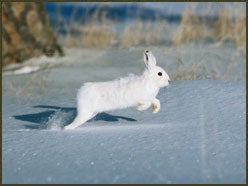 The snowshoe hare is possibly the most underhunted small-game animal in North America. Found only in the northern latitudes, snowshoes are best hunted during the deep of winter, and they aren’t always easy, which is just one of the reasons the “Hare of the North” endears itself to hunters from Maine to Washington.

The critter is not a rabbit, as some folks call it, but a true hare (see below). Because its hide changes from gray in the spring and summer to solid white in the fall and winter, it’s appropriately called a “varying hare.” Some hunters call them other names, too (many not printable), after a cold day in the winter woods.

Depending on your preferences and energy level, there are two basic ways to hunt snowshoes. You can round up a bunch of beagles and follow the dogs as they tear up a hot bunny trail, or you can stillhunt, slipping and easing through the forest. Either technique is an adventure: the latter quiet and pensive, the former all bedlam and chaos.

First Hare
My introduction to snowshoe hares was a memorable event — though one I’d like to forget. Armed with a 12-gauge shotgun, I prowled the woods in northern New York from sunrise to dark. The results of that excursion, about 35 years ago, added up to a fleeting glimpse of a lone, very fast, very white hare, and a half-dozen falls that landed me in three feet of snow despite the snowshoes I was wearing. As a rookie forestry student, my goal wasn’t so much to collect a limit of hares but just to stay upright on snowshoes for as long as possible. I learned two things that day: Snowshoe hares are impossible to hunt, and snowshoes that fit under a boot are darned near impossible to walk on. It could have been worse. I could have been accompanied by a couple of my more accomplished classmates, who would have enjoyed — and reported on — my pathetic performance.

Determined to hone my woods skills, however, I trudged through the beeches, maples and hemlocks, and in the following days eventually managed to collect a brace of hares. It was a sweet success, because I’d never bagged a snowshoe before, and the winter woods were a soothing welcome to a frazzling first year in college.

The Western Way
A few seasons later, when I moved to Utah to complete my formal education in forestry, I met a couple of guys who suggested we hunt snowshoe hares. Never one to turn down a hunt, no matter what the quarry, I quickly agreed. What I didn’t know was their strategy: Instead of rambling through the woods with the intention of flushing and shooting hares with a shotgun, we eased about with scope-sighted .22s, looking for snowshoes bedded in the evergreen timber.

This was a new and intriguing way to hunt. My pals and I split up in the high-country forest, and I was on my own to figure out how to locate a sitting bunny. As luck would have it, we were greeted with four inches of glistening new snow when we entered the woods. Every track was red hot. I was grateful — I needed all the help I could get.

The first track I struck looked like a piece of cake. But after following it for a good mile, I concluded that perhaps there was something about snowshoe hares I didn’t understand.

I finally came upon the animal as it sat next to a stump covered with a foot of snow. I laid eyes on the hare only because it burst out of its hiding spot in a mini-explosion. All I saw was a psychedelic blur that was instantly swallowed in a world of white. At that point, I made two discoveries: My .22 was useless against such a surprise retreat, and I’d need to have the eyes of an eagle to spot a hare before it sprang to freedom.

Seeing Eyes
My first task became to actually define the form of an all-white critter sitting in an all-white environment. I exaggerate. The snowshoe hare isn’t all white. The very tufts of its ears, amounting to a few wisps of haair, are black. So are its eyes, which are about as big as a dime. And there you have it — a sum total of about a half-inch of black on solid white.

I finally found success that day, however. About midday I wandered about, following the tracks that were now everywhere. It was almost impossible to isolate a single print. I’d follow one, and soon discover another that seemed to be even fresher. And so it went, until I eventually lined out on a track that snaked through lodgepole pines and Douglas firs where the underbrush was sparse.

At one point I was about to enter a sagebrush clearing, and I looked ahead for the tracks that I knew must enter it. Seeing none, I realized that the hare might be sitting at the edge of the forest, just ahead of me. I stopped, searched extensively with my binoculars, and optically followed the prints. Presently the tracks just disappeared. Try as I might, I couldn’t make out any continuation of the hare’s progress. A moment later, however, I saw a black marble on the snow. It was the hare’s eye. Slowly raising the .22 to my shoulder, I confirmed my suspicion through the scope, and the resulting shot rewarded me with a fat hare.

Snow Gear
Hunting white hares doesn’t take any specialized gear unless you pursue them in seriously deep snow. In that event, snowshoes are mandatory. Some hunters use cross-country skis, but I’ve found they’re often a handicap in thick timber where hares tend to live.

Quiet clothing is a must, and it should be well insulated and waterproof. Wool is my choice. Good binoculars are advised if you plan on tracking or just plain looking into the forest. I prefer 8X or 10X to see the tiny clues in the snow.

Hunting with hounds is great fun, but these are specialized dogs that have been carefully trained to run hares even though they usually share the woods with deer. Hounds pick up a trail and run the hare in a big circle, similar to that made by a cottontail but much larger. Hunters position themselves at potential ambush points, waiting for the snowshoe to course along ahead of the dogs.

To me, the quiet of a winter wonderland is a soothing respite from the hectic pace of civilization. It’s a one-on-one hunt, where you amble along at your leisure and test your eyes as you’ve never challenged them before. If you successfully single out and track a hare and pinpoint that diminutive spot on the snow, you’re ready for anything else in the woods, whether it’s a whitetail in a cedar swamp or an elk in a spruce blowdown. You’ll earn an education in the woods and have a plump hare or two as a bonus.