3 Great Places to Take a Stand in the Big Woods

The woods seem limitless. The deer are few and far between. There are, however, some ideal spots where you can wait for a big buck to come to you. 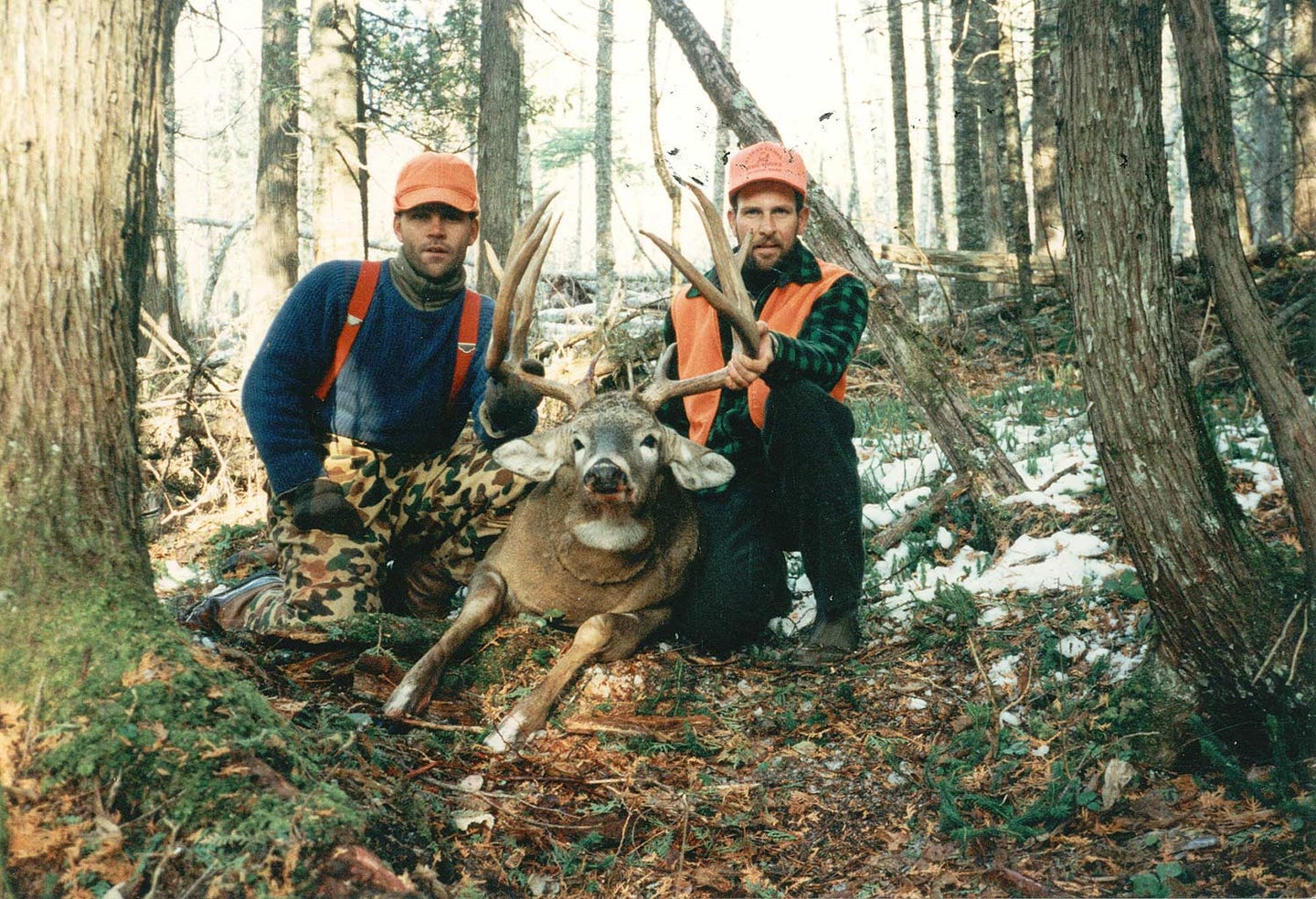 All big woods hunters hope for a good tracking snow. But when it doesn’t snow, a change is plans is called for. Hal Blood
SHARE

When people think about hunting in the big woods of the north, they envision hunters dressed in their classic wool clothing taking to the snow-covered forest in search of a buck track to follow. Many hunters from Maine to Minnesota would rather be on the track of a buck when there is snow on the ground, than to hunt any other way. We cannot control when and where the snow might fall, and in some states the season is short, so tracking might not even be an option. In that case, a second choice for many hunters is to climb into a tree stand or crawl into a ground blind and wait for a buck to pass by. I have been guiding deer hunters in the big woods for 30 years and have had great success with stand hunting. The key is to find the best stand locations.

Deer densities are typically much lower in the big woods of the north as winter is the controlling factor in the size of the herd. One severe winter can cut the deer herd in half or even more—and it may take years for it to recover. Big woods hunters know that the odds are stacked against them for shooting a buck, especially without snow, but choose to hunt there anyway. Stand hunting in the big woods takes on a whole new meaning as bucks do not have any regular feeding or bedding areas. Big woods bucks are wanderers and may have a home range that extends for 10 miles in any direction. For that reason, finding a good stand location takes a lot of scouting.

The two best times to scout are late October after the leaves have fallen, and in the spring as soon as the snow melts and before green-up. Big woods bucks spend their summers in a relatively small area where the feed is good so they can recover from the long winter and fatten up for the next breeding season, which will come all too quickly. As soon as the leaves fall from the trees, the woods especially areas that have been logged, become more open and the bucks will seek areas with more cover. This is the time when bucks will begin to travel throughout their range and start to lay down sign. In the spring, buck sign such as rubs, and scrapes will still be visible after being covered in snow all winter.

From my experience, a buck in the Big Woods only uses only about 10 percent of his home range. If you know this than it is easy to figure out that you need to place a stand in that 10 percent. A buck will travel through his territory using the terrain and cover to his advantage. Much of this travel is done along transition zones between hardwood and softwood green growth areas. This affords them more cover and security. These transition zones are most often either along the swamps and bogs of the low country or high up on the ridges and mountains. The sign that I look for along these transition zones are signpost rubs and annual scrapes. Both types of sign that bucks lay down are in the same places year after year. They are also used by multiple bucks and are used generationally. Two of the three best stand locations center around this sign.

My number one pick for a stand is at a signpost rub or several in the same area. I coined the term signpost rub years ago when writing my first book titled “Hunting Big Woods Bucks” after studying buck sign in the big woods for over 40 years. A signpost rub is a rub that is made on the same tree year after year. They do this as scent communication spot for marking their territory. A calling card so to speak. A signpost is usually used by multiple bucks and right down to the yearlings who follow the older bucks around to learn the travel routes. Does also visit signpost rubs and smell them to see if her preferred buck has been there lately. Sometimes you will find several signpost rubs within sight of each other. Quite often the bucks have their preferred tree there and sometime one buck will rub more than one of them. I have put a trail camera in a signpost area for five years now and every year there are at least four to five different bucks that us them. I also have a signpost rub in my “mancave” that the beavers cut down that has 80 growth rings in it. It has been rubbed for at least 60 or those 80 years and I can only imagine how many bucks have used that signpost over all those years.

Ninety-five percent of the signpost rubs in the Big woods of the north are made on a brown ash tree. Technically it is a black ash, but the old-timers and basket makers call it brown ash. This tree grows in wet areas such as cedar bogs, streams, and spring seeps. It has a corky bark which I think holds scent better than other trees. The key to finding a signpost rub is to find the brown ash tree and then looking to see if they are rubbed. It takes a lot of scouting to find them but once you do, you have found the best place to take a stand in the Big Woods.

An annual scrape is like a signpost rub in that the same spot is used year after year. Most scrapes are made near where the does are living, but that is not the case with an annual rub. These scrapes are made along a buck’s travel routes. Like a signpost rub, an annual scrape may also be used by multiple bucks. The more bucks that use them the larger they will be. When multiple bucks use them, the dirt and leaves will be kicked in several directions depending on which way the buck is traveling. There are a couple of ways to tell if the scrape you find is an annual scrape. One is that the tree roots in the scrape will have healed up scars on them from the buck’s hooves scraping the bark off from them. The other way to tell is that they will be dug deeper into the ground than a regular scrape from the dirt being kicked out of them over the years. I have found annual scrapes that are six inches deep from generations of use. It is easy to see why an annual scrape is my second choice to take a stand.

The areas where does are found in the big woods may change from year to year. Logging has a big influence on them as it provides the best feed and the does want to bring their fawns where the feed is the best. It would be like planting a food plot. It is just a natural food plot that grows a variety of green plants when the dirt is disturbed during the logging. One to five-year-old cutting are prime feeding areas. After that, the browse is out of reach and the does will move on to newer cuttings. Does will spend more time in open woods than the buck will, but as the rut heats up the bucks will begin checking all the does in their territory. They will travel day and night in search of a hot doe and let their guard down as they do. It is a lot easier to find where the does are than the bucks. Scout for new cutting areas if there is logging going on in your area. If not, scout the ridges for blown down trees where good feed is to be had on the tops. Maple, yellow birch, and cedar are favorites, but they also love the “old mans beard” moss on the limbs of the blown down spruce and fir trees. Areas where the does are living will be easy to find as there will be plenty of droppings littering the woods. Setting up your stand with good visibility where there are does living is a good bet as every buck for miles will be checking them regularly.

Stand hunting in the Big Woods can be a long and lonely wait for a buck to come along as the deer densities are a lot lower than in the farmland and suburban areas. The upside of it is that you may be rewarded with a once in a lifetime buck that has probably never seen a human being. Most Big Woods Bucks end up dying of old age without anyone ever seeing them. I will tell you from experience that reward is more than worth the time spent in the stand.