Ryan Williams Spends the Winter Hunting Wolves in the Idaho Wilderness. Here’s What We Can Learn From Him 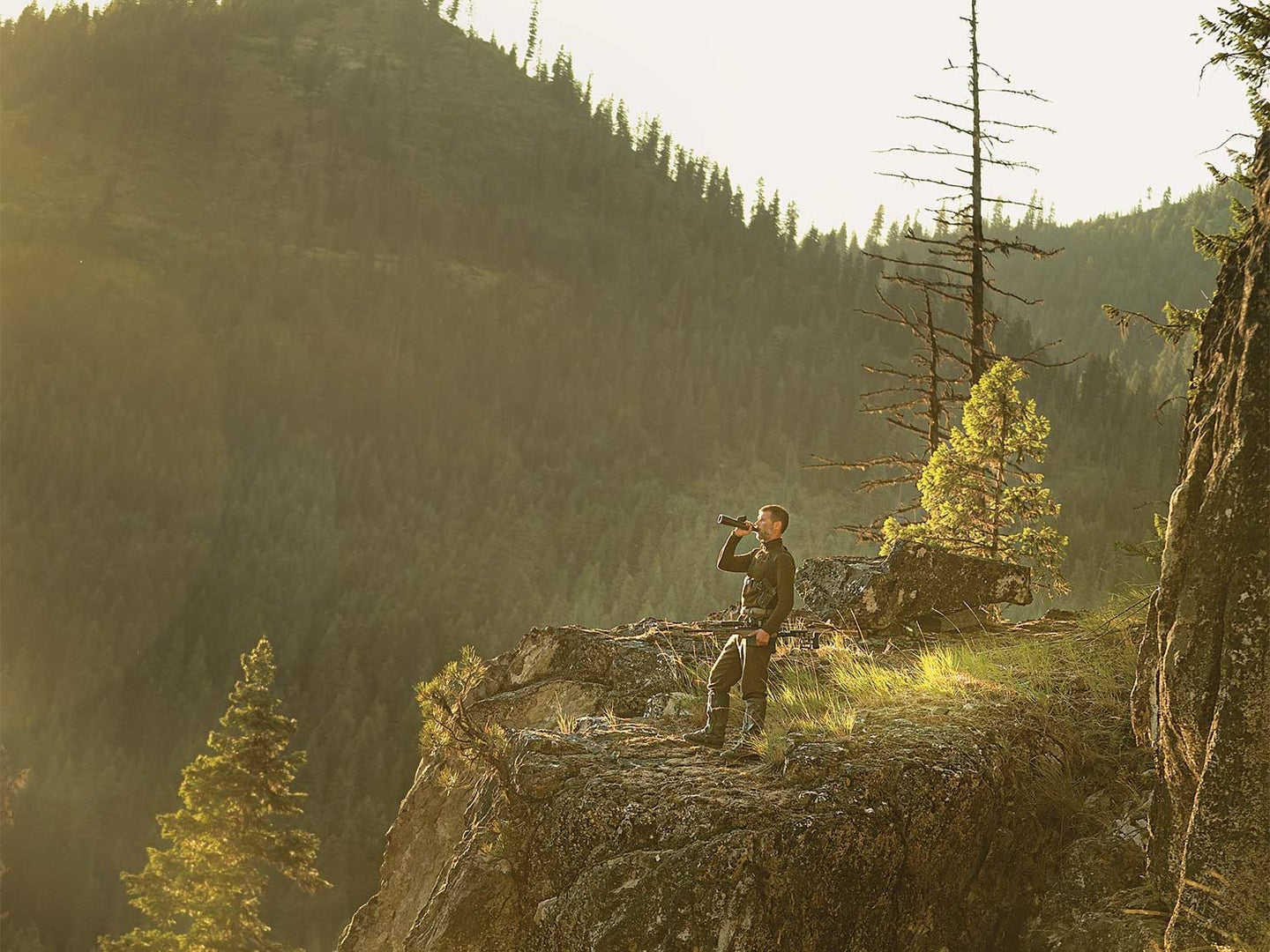 Ryan Williams wants to be clear. He’s not a wolf-­hunting expert. Though he spends the majority of the year around wolves and hunts them nearly all winter out of his family’s lodge in the remote Idaho wilderness, he says he’s more a perpetual student than a knowledgeable teacher.

“You could hunt these things for a lifetime and never learn all there is to know,” says Williams, who works as a U.S. ­Forest Service smoke jumper during the summer, bowhunts elk in the tangled pine jungles of Idaho’s high country through the fall, and then calls wolves all winter.

“Even when you think you have them figured out, they’ll pull some shenanigans that make you second-guess what you know. My friends have gotten so used to me coming back with a one-that-got-away story that they call me ‘Chances with Wolves.’”

But Williams has an advantage that most of us don’t: a 2-million-acre classroom where he’s learned the behaviors and responses of wolves and developed a library of experiences about which hunting tactics work, which need refinement, and which are definitely not effective.

“I can tell you with more certainty about what doesn’t work than what does,” says Williams, who lives and hunts west of Missoula, Montana, on the Idaho side of Lolo Pass. “Most prey-in-distress calls don’t work. Also, one of the best ways to not kill wolves is to rely on a single gun for all setups.”

Idaho has had an established wolf-hunting season since 2012, just months after the carnivores were removed from federal protection. The population threshold that allows the Idaho Fish and Game Commission to hold a managed hunt is 150 wolves; in its last census, the department estimated the state’s population at about 1,500. Last spring, Idaho Fish and Game approved year-round hunting for wolves on private land in the northern half of the state—­including Williams’ area—and established an annual bag limit of 15 wolves per hunter.

Idaho’s experience is likely to be replicated by other Western states. While Montana and Wyoming have long and liberal wolf seasons, Utah, Washington, and Oregon have documented wolves within their borders but don’t have designated seasons. Colorado voters will decide this fall whether to reintroduce wolves west of the Continental Divide.

Because so few of us have experienced wolf hunting, the frontier of knowledge follows pack distribution and the establishment of seasons, and makes even “nonexperts” like Williams leaders in our accumulated understanding of how to hunt these very adaptable canines. For Williams, whose family has operated a remote lodge on the upper Lochsa River for three generations, wolves are a relatively new presence in the Nez Perce-Clearwater National Forests.

“When I’m at our smoke-jumping base [in Missoula], I can look across the tarmac and see the very plane that brought the first U.S. wolves from Canada back in 1995,” says Williams. “It’s amazing to me how widespread and established they’ve become” in the intervening 25 years.

As a diehard archery elk hunter, Williams has seen his success decline as wolves have diminished elk populations or pushed them out of his area, which once held the highest elk densities in Idaho. But he’s also seen wolf packs decline in size as their prey base shrinks. Instead of seeing packs of a dozen, packs now number five to seven wolves. The predators cover hundreds of square miles, and they’ve become extremely wary of hunters.

“A lot of people around here hate wolves,” says Williams. “I don’t hate them. In a lot of ways, I wish they weren’t here. But they are here, and they’re not going away, as much as many people would like them to go. So I figured I’d learn as much about them as I can so I can manage their numbers. Along the way, they’ve taught me how to be a better hunter.”

Here’s a glimpse at Chances with Wolves’ playbook, based on his years of successful—and unsuccessful—wolf hunts.

“Wolves are actually extremely easy to pattern,” says Williams. “That’s why trapping is so effective. They’ll use the same trails and roads all winter, and even year after year. But once they detect danger, they’ll change their patterns instantly until they sense the danger has dissipated. In the winter, which is mainly when I’m hunting them, they’ll gather on high, open ridges in the daytime. I can see them with optics from a mile away, but these places are hard to reach, especially when I’m busting deep drifts in snowshoes, so I’ve learned that you need to intercept them coming or going from those secure lookouts.”

Read Next: Finding a Middle Ground on Wolves and Wolf Management

Williams says the ideal wolf-hunting scenario is one in which they reveal their location without prompting. “I like to drive or hike to a spot and then listen. If I can hear them howling, then I’ll figure out an approach and work in on them, then set up and use a prey-distress call when I know they’re fairly close. I don’t really want to start off howling, because that immediately lets wolves know that I’m in the neighborhood, and it puts them on alert. More often than not, once I howl, wolves will move away, not ­toward me.”

Williams uses both mouth and electronic calls, using a selection of distress calls and howls, but he’s concluded that entry-­level electronic calls aren’t worth using. “The speakers don’t sound realistic, especially for howling,” he says. “Once I went to higher-end Foxpro calls, I got better results, mainly because the speakers are better and the more powerful remote control lets you set the unit farther away from the shooter.” He has had mixed luck with the Alpha Wolf Howler from Rocky Mountain Game Calls, based down the mountain in ­Kamiah, Idaho. “I’ve talked to a lot of wolves with it, but it’s huge and I keep bending the mouthpiece. The best mouth howler I’ve used is the E.L.K., Inc. Power Bugle. You can change tone and do a lot of different howling variations.” But Williams says the one response you never want to hear from a wolf is a bark. “It’s just like when an elk barks. It means the wolf is onto you, and your hunt is done.”

Calling wolves is just like calling other wild animals. You want to initiate a conversation and unlock some response. “When I first started calling, I’d just sort of call without purpose,” says Williams. But after an all-day conversation with a pack of wolves that held up in cover no more than 200 yards away without approaching, Williams finally had enough. “I had laid out in the snow for eight hours on a wolf-killed moose carcass, just howling back and forth with the pack. Finally I got so cold and so mad that I moved toward the pack and started cutting their howls off with my own howls, just getting in their faces. That was what it took to unlock them. They started getting mad right back and it unlocked them from their cover.”

Hunt with a Buddy

Borrow a tactic from elk and turkey callers and put a shooter in front of a caller. An incoming wolf that may hold up out of range of the call may be well within range of the hidden shooter. The same tactic can work for solo hunters who use electronic calls: Simply put the call 100 yards or so behind you. Wolves are so perceptive that you must use cover, minimize movement, and ensure that neither shooter nor caller is seen or winded by incoming wolves.

Williams says that for his first decade as a wolf hunter, he was badly undergunned. “I hunted with my elk rifle, a .30/06 that had trouble grouping beyond about 200 yards. I wasn’t able to reach out to distant wolves, but I also couldn’t get on wolves in the thick stuff. So I’ve gone with a 7mm STW on a chassis stock with a scope that I can dial for shots out to 1,000 yards. That’s a great dead-winter, long-distance setup. But I also have a shotgun with an 18-inch barrel and Federal FliteControl buckshot loads that will put all 9 pellets in a pie plate at 50 yards. More of my shots, especially when I’m elk hunting, are in thick stuff inside 100 yards and often inside 50 yards. So I also have a semi-auto, folding-stock carbine with a low-power scope that I have set up in either 9mm or 40 S&W that I’ll carry for wolves during elk bow season.”