We've got a great and lively Xbow discussion going on at Mike Hanback's Big Buck Zone blog. With few exceptions this is the most civil and interesting debate he's ever seen on the Xbow, with hunters on both sides checking in with some good comments and viewpoints. Click here to tell us yours. 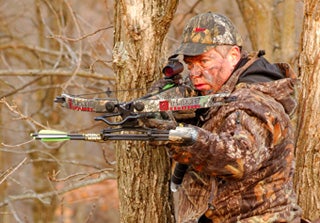 In my Whitetails column, “The Crossbow Debate”, in the June/July issue of Outdoor Life we asked readers to come here to the home page and vote in our online poll below: “Should crossbows be legal in archery season?” Knowing how hard-core and passionate hunters are on both sides of this long-standing debate we expected a good response–but not nearly three-quarters of a million votes and counting!

Maybe it shouldn’t have come as such a surprise given that the issue about whether to allow more liberal use of crossbows for hunting has become such a hot topic around the country. Consider that a bill in Texas to allow the use of crossbows for archery hunting was defeated by just one vote-and that was because one pro-crossbow senator happened to be sick that day. So expect this to come up again in the Lone Star state in 2008. Speaking of ’08, New York State might have a similar bill to look at next year.

South Carolina is actually looking at the crossbow issue right now. We hear that a vote might take place in just the next couple of days, prior to end of the current legislative session, to legalize crossbow use during archery season. The same goes for Illinois, where a vote could happen within a week on whether to allow hunters who are 62 years of age or older to use crossbows during bow season.

So it’s no wonder that we’ve had such a huge response to the poll. But here’s an interesting twist on the poll results…a conspiracy theory has emerged with old-school vertical hunters and new Xbow fans accusing each other of sending out letters and mass emails encouraging their troops to vote…and vote…and vote…and to stay up all night and vote some more to skewer our poll. If so, by gosh, it has worked! Over the weekend the numbers on both sides bounced up, down and all around. Where will the final tally end up? Who the hell knows, but if it cracks the million mark it would surely be a world’s record for an Internet hunting poll.

BTW, we never said our polls were scientific (among other things anybody and his brother can vote as many times as they want to). We want the polls to be interactive, fun and generally informative. Well, at least this one is interactive and fun!

We’ve also got a great and lively Xbow discussion going on at my Big Buck Zone blog. With few exceptions this is the most civil and interesting debate we’ve ever seen on the Xbow, with hunters on both sides checking in with some good comments and viewpoints. Click here to join the chat!