They see you trollin' 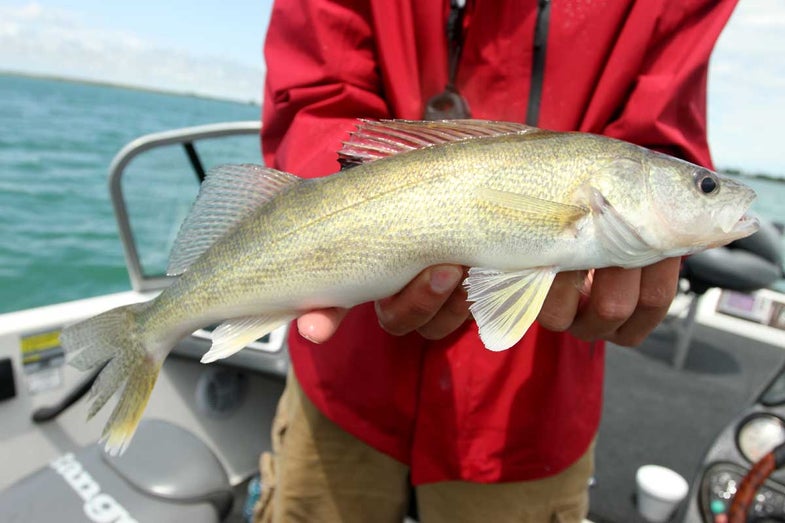 After picking the brains of some of the Midwest’s best professional walleye fishermen and area guides, we came away with 20 of the best tips, tactics, secrets and bits of advice that any serious walleye fisherman could hope to know. Now it’s up to you to put them to work on your next walleye fishing excursion.

Whether your game is jigging spoons in a local river or trolling bait off planer boards and lead-core line on the big lakes, you’re bound to find a bit of knowledge in these three pages that will help your walleye fishing this spring and in the seasons to come.

1. FAKE IT
If you’re being pestered by nontarget species, consider leaving the bait bucket at home and going entirely with plastics. David Rose, who guides on inland lakes in northern Michigan, says he started using plastic worms on his crawler harnesses last summer on lakes that were overrun with undersized perch. Even if the small fish continue to hit your bait, they won’t tear it up so much that you’re constantly rerigging.

2. TROLL DIRTY
Vertical jigging is probably the most productive technique for walleye fishing in rivers, but high winds or rains that dirty the water can put the fish off the jig bite. When water conditions change for the worse, try trolling near bottom. Use a three-way swivel and tie a sinker on a 6- to 12-inch dropper, or use a bottom-bouncing rig and trail a floating/diving minnow. Troll upstream and cross-current. Don’t be afraid to use a sinker of up to 4 ounces on deep, fast-flowing rivers.

3. THINK BASS
Although more closely associated with other fish species, weed beds hold plenty of walleyes, especially in shallow, clear-water lakes. Run rattling baits over the top, stalling them in the holes in the weeds; jerk floating/diving minnows along the outside edges; or work jigs tipped with bait into any openings you can find in the weed cover and along the edges. And if something else takes it—like a bass or a pike—that’s not all bad, is it?

4. DOUBLE DOWN
Three-way swivels allow you to double your trolling offerings. Attach a deep-diving crankbait to a 2-to 3-foot leader tied to the bottom of the swivel. Then add to the top of the swivel a leader twice as long as the other and a floating/diving minnow-style bait or a light, thin spoon. When putting the baits out, drop the deep-diver in the water first and let it start diving before letting go of the second leader. This will keep them from tangling and ensure a proper presentation of both baits.

5. SINK SPOONS
Trolling spoons is an effective way to catch walleyes, but getting them deep enough can be a challenge. Use the same techniques that big-water salmon anglers employ to attain appropriate depth—downriggers, snap weights, in-line sinkers, diving planers or lead-core line. Walleyes are often gear shy, however, so increase the length of the leader off a lead-core line or the distance behind the cannonball on a downrigger. Fluorocarbon leaders will help, but be careful, as have no stretch.

6. WET A FLY
Flyfishing for walleyes can be a highly productive technique at certain times. In early spring or late winter, when walleyes are moving up rivers to spawn, they can be taken on nymphs or yarn flies (that mimic salmon or steelhead eggs) drifted along the bottom beneath salmon reeds or in deep, quiet holes. During mayfly hatches, fish can be caught with nymphs on the bottom, streamers at middle depths and dun and spinner patterns on the surface. The best dry-fly fishing generally occurs before dawn or after dark.

7. DOWNSIZE THE BAIT
One of the toughest times to catch walleyes is during a significant mayfly hatch. To increase your odds, use what guides call a mayfly rig—a small spinner with a portion of a night crawler on a small hook. Cast the rig out and count it down, then retrieve it slowly, experimenting with depth until you find the strike zone; walleyes often hit mayflies as they’re on their way to the surface to emerge. Keep the rig small; mayfly larvae are rarely longer than an inch.

8. BE VERSATILE
The rule of thumb for jigging is to use minnows in cold water and night crawlers, leeches or soft-plastics as the water warms. But Mark Martin, a top veteran pro, says you’re making a mistake if you don’t take all types of live bait with you. Although leeches and crawlers may be hard to find in the winter, they’ll sometimes outproduce minnows in cold water, especially if it’s dirty. Other times, even in the heat of the summer, fish want minnows more than other offerings.

9. HIT THE WHOLE COLUMN
Walleye fishermen usually concentrate on the bottom, but often the most active fish are suspended in the water column. When trolling, vary the depth of your offerings by changing your diving bait or adding weight to your lines if trolling with spinner rigs. Sometimes the ‘eyes are out on the prowl, foraging on minnows or shad that are schooled somewhere between the top and bottom. Watch your depth finder for clues to their whereabouts and fish accordingly.

10. JIG A PLUG
Spice up your jigging offering by substituting a chatterbait—such as a Rat-L-Trap—for a spoon. Cast it out, let it drop to the bottom, then yo-yo it back to the boat. Don’t snap it up as high as you would a spoon, as the hooks can foul on the line. Rattling baits fall more slowly than spoons, but you can fix that by adding a slip sinker to your line before you tie on the bait. The extra weight tightens the plug’s wobble on the fall.

11. WORK THE SHALLOWS
Most walleye anglers concentrate on moderate to deep water, but there are fish in shallow water that are generally ignored. This is especially true during periods of high water when the predators move shallow to forage. Jigs tipped with live bait produce in the reeds and cattails, often in water not much deeper than a walleye’s back. Jig spoons near cover. Night crawlers on harnesses with spinners work when cast around the edges and in cuts, but they’re tough to fish in thick stands of vegetation.

12. HEAD DEEP
One of the toughest bites walleye anglers face is immediately after a weather front passes. With a high, clear sky, the fish often sulk in the depths. The key is to concentrate on deepwater structure and fish with live bait, either slowly trolling or driftingaround humps and breaklines, usually right where the bottom begins to flatten out.

13. PLANE OUT
Planer boards that carry lures or bait away from the boat are especially important in ultraclear water. Anglers who troll many lines usually use large boards that are tethered to the boat, and they clip their lines to the tether line. Anglers in small boats can easily fish up to three lines per side with small in-line planers. The key is to set the far-running lines first and position those rods closest to the bow; set near-running lines last and toward the stern. Allow more line out before you attach the outside boards, so the baits trail farther behind the boat. That will let you reel in fish on an outside line without getting tangled.

14. GO NATIVE
“Matching the hatch” is a familiar phrase among trout anglers, and a well-kept secret among the walleye pros is using minnows that are native to the lake or river they’re fishing. Most bait shops carry only commercially raised bait or minnows netted from large bodies of water, often a great distance away. Some pros pick through a bait shop’s offerings to find local creek chubs, suckers or mud minnows, If you’re not sure if you’re using the right bait, consider getting some minnow traps or try seining the creeks that run into your lake or stream. As the old saying goes, give the customer what he wants.

15. USE A LIGHT
Speaking of clear water, walleyes are notoriously photosensitive, so consider fishing for them at night. Trolling with floating/diving minnows alongside structure or casting to the flats where the fish move up to feed are productive techniques. Both methods work well in rivers, too, though some anglers jig as they would any other time. Attach a light source to in-line boards to detect strikes.

16. LOWER A LEECH
Leeches are a terrific bait for walleyes, especially when presented on slip bobbers or jigs. To make them easier to grip, carry a rag or rub them against your pant leg to remove some of the slime. When hooking them, insert the point of the hook into their suction cup—this will let them swim freely instead of balling up on the hook. Keep the leeches in some sort of container in the livewell to acclimate them to the lake temperature before you bait up.

17. LURK, DON’T JERK
Floating/diving minnow lures are known as “jerkbaits” because they’re fished with a dramatic, erratic action. A quieter retrieve is often more productive for walleyes, which tend to trail baits rather than simply lunging and striking. Neutrally buoyant baits are especially suited to walleyes, as they sit still or rise ever so slowly when you stop working the bait. Walleyes take these lures during a pause in the action, so stop your retrieve often.

18. GIVE ‘EM OPTIONS
When it comes to trolling with artificial lures, increase your odds by adding soft-plastic trailers to your crankbaits. Use small twister-tail grubs or short plastic worms. Attach a 2- to 3-foot length of monofilament to the back hook of the crankbaits, tie on a hook and attach the grub. Make sure the hook is exposed, and if you’re using a worm, run the hook through at least three quarters of the soft-plastic; that way you won’t miss short-striking fish. Don’t add any weight to the leader or you’ll interfere with the crankbait’s action. And use opposite colors when trailing crankbaits—dark grubs with light-colored plugs and vice versa.

19. TRY A NO-SLIDE BAIT
When jigging with live bait, try adding a piece of plastic to the hook shank. A body from a grub or a section of plastic worm helps keep the bait on the aft end of the jig and prevents it from sliding up the hook shank. That way, when a walleye grabs the bait, it’ll also get ahold of the hook.

20. SWITCH TO COPPER
If you like using lead-core line but are concerned about trailing a ton of line behind your boat to achieve the right depth, consider switching to copper wire. Multistranded copper wire is all the rage with Great Lakes salmon anglers because it achieves twice as much depth per length as lead-core line. The downside is that there’s no give in copper wire, so you have to use larger-diameter fluorocarbon or monofilament leaders with some stretch to prevent break-offs.