When a group of strangers is stranded on a Scottish island, hunting becomes a matter of survival 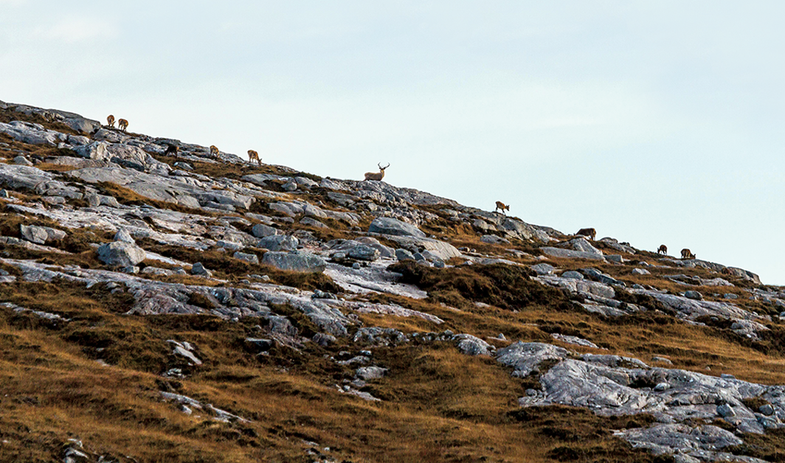 It’s the look that still haunts me, the hungry stares of my fellow castaways as I shuffled into our squalid, sodden camp, a freshly killed stag conspicuous by its absence. Their eyes followed my every step, wide with unspoken questions.

Why hadn’t I brought them meat? What had happened during those hours that I was gone and they had listened through the North Sea wind for the sound of my rifle shot? What would we eat? What kind of hunter was I, anyway? 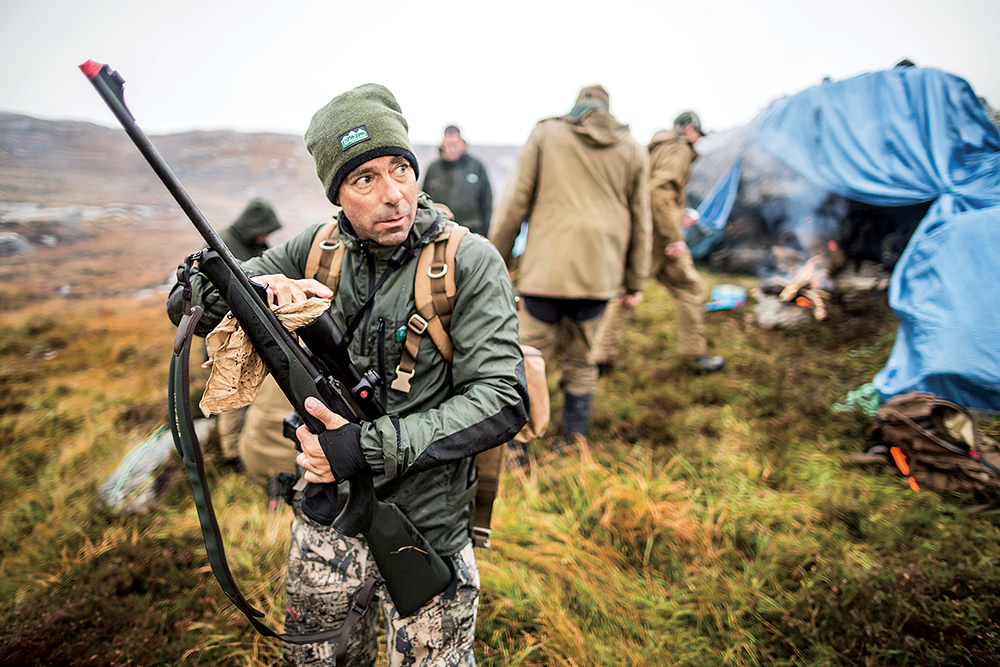 The author, preparing to hunt.

“Couldn’t get it done,” I mumbled lamely as my campmates parted to admit me to the center of our makeshift camp, a bus-sized rock that we used for a windbreak, and until our tarp blew away in the middle of the tempestuous night, the centerpiece of a serviceable shelter. A smudgy peat fire was sputtering below the protective overhang of the rock, and on the fire a vile-looking liquid simmered in a dented metal chocolates tin as the weak flame spumed and smoked.

“C’mon, then, have some broth,” consoled Kate Gatacre, an English magazine editor, the only woman of our crew, and, at this particular moment, my favorite person on earth. Sometime during the previous evening, as the remnants of Hurricane Joachim lashed our naked rock with wind-driven rain, Gatacre had proven herself as the spiritual center of our multi-national group of journalists, strangers to each other until this week. She held down a corner of our wind-whipped tarp, she was quick with a joke and a pull of “bramble,” as she called her fruit-laced vodka, and she comported herself in the way I imagined stiff-lipped Brits of previous generations might have behaved during the Blitz. 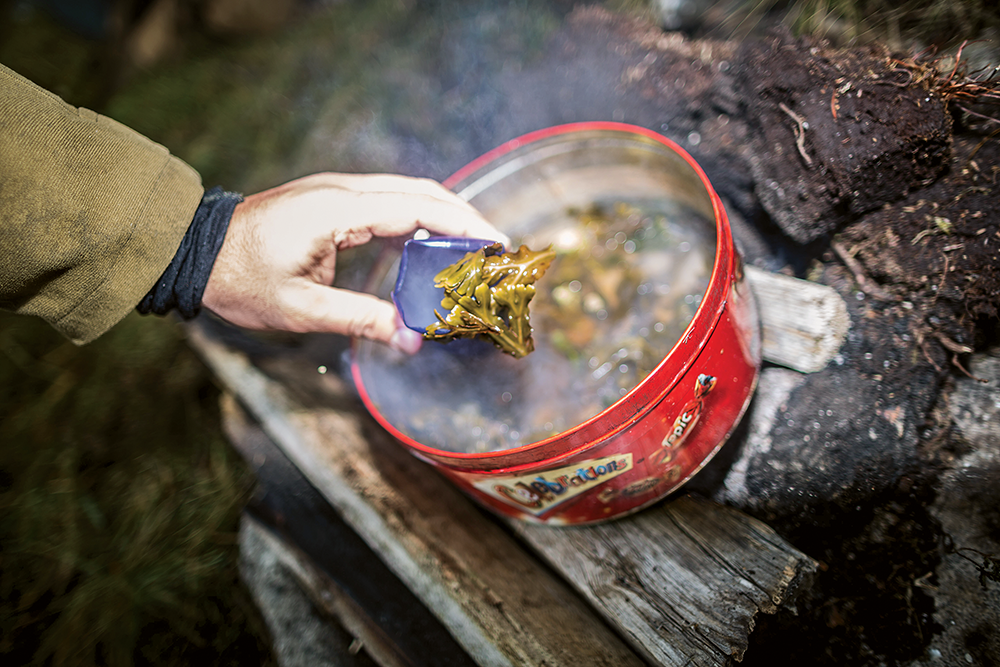 “Right, then. We made it. Let’s go gather some rocks,” Gat-acre had directed at daybreak, in order to build a proper fire ring. Now, she was offering me the sustenance that I had been unable to provide. The broth was a briny, chewy brew of tidewater, seaweed, and limpets, the sucking barnacles that are the bane of barge captains and dock owners on every coast. It was possibly the most delicious soup I’ve ever gagged down.

As I slurped the broth, I reflected on the past 24 hours.

A SOCIAL EXPERIMENT IN HUNTING
Yesterday morning, we had looked northeast from our comfortable lodge on Scotland’s Isle of Harris toward the craggy island called Taransay. Steve Woodhall, the keeper of the lodge and our hunting guide, or ghillie, said that during the old days, Taransay had been a Viking outpost stocked with sheep and potatoes to sustain Norse raiding crews. Later, sheepherders and religious sects set up short-lived settlements. No one lives on Taransay now, but a dozen-plus years ago, it was the setting for Castaway 2000, a popular reality-TV series that followed the tribulations of a group of strangers who tried to outlast each other on the barren island.

Taransay is now home to several hundred sheep and about 120 red deer. Our group—which included writers from Spain, France, Germany, Denmark, and England, in addition to myself—had been invited here to hunt stag. Simon Barr, who manages media relations for Sauer rifles, Hornady ammunition, and Leica optics, wanted us to field-test the companies’ new products. “We have a little surprise for you, too,” he hinted as part of the invitation. “I do hope you’re up for it.”

The first day was to feature a boat ride to Taransay, followed by product testing and stag hunting. We’d be back at the lodge for supper, I figured, so I left behind my warm clothes, snacks, and water bottle, packing only a knife, a Leica binocular, a Sauer .308 rifle, and my basic survival kit containing a headlamp, a fire starter, wound dressings, and some aspirin. 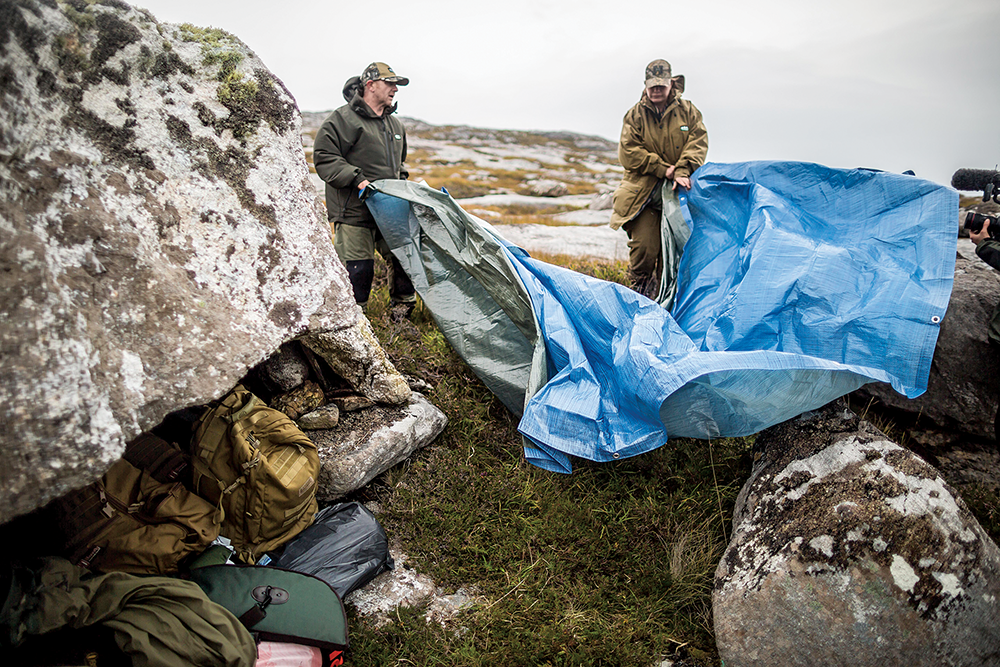 Rigging a tarp for shelter.

It wasn’t until we had set foot on Taransay’s rocky shoreline and watched the boat that delivered us motor away that I became aware something wasn’t quite right.
“Well, then,” Barr puckishly announced. “That boat won’t be back for another three days. You have your rifles. Your job is to survive until then by hunting or whatever other means possible. There’s a storm blowing in. You’d best make yourselves busy.”

We were all now castaways. And as castaways must have done for centuries the world over, we looked at each other with a mixture of anxiety and solidarity. We’d have to rely on each other to get by.

GATHERING RUBBISH
Our first order of business was to inventory our gear, and the list was short and inadequate, consisting of my headlamp, several knives, and a blue tarp. So we looked to the land and found it full of useful trash. As one of the outermost landforms in the Outer Hebrides, islands on the northwest shore of mainland Scotland, Taransay collects a dismaying amount of flotsam—debris that has floated across the North Atlantic and washed up on her shore. We found lumber of all sizes, milk jugs, fishing net, water bottles, spent shotgun shells, rubber boots, and even plastic scoop shovels. We collected driftwood, the most serviceable plastic bottles, wire, lengths of poly rope, and a chocolates tin that might serve as a cooking pot. Then we hiked a couple of miles to the interior of the island, where we hoped to find protection from the hurricane that was forecast to strafe the coastline. 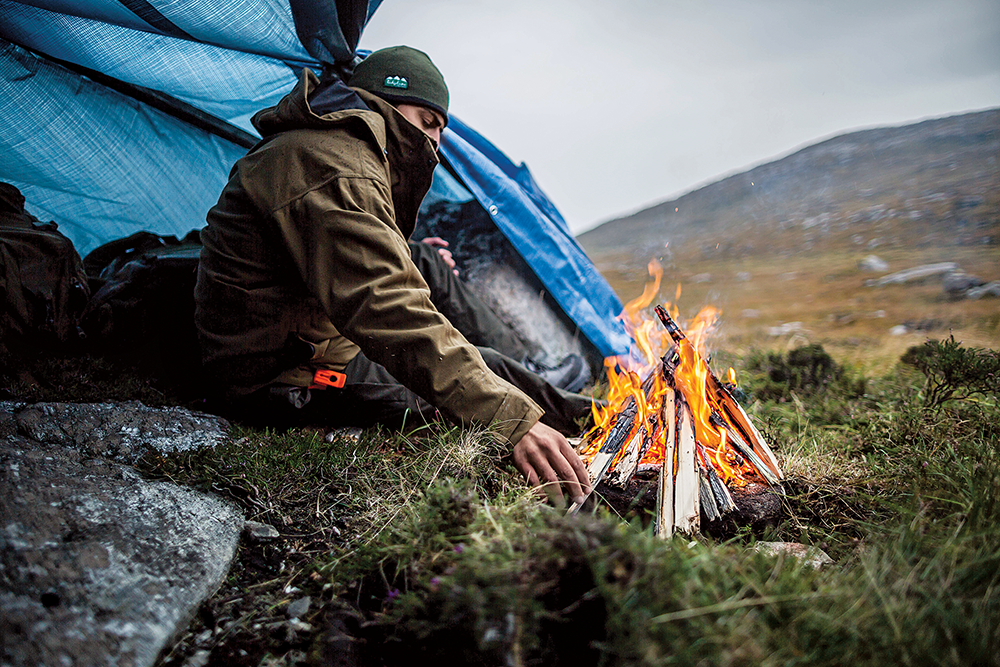 We based ourselves at the large rock and rigged a crude shelter with the tarp. Then we endured one of the longest nights of our lives, as wind blew away our tarp, and cold rain soaked all of us, causing us to question our own wisdom and the intentions of Barr.

At daylight, bleary, wet, and hungry, we hatched a plan for hunting.

“Only stags are legal here,” explained Woodhall, “and the roar [rut] is just starting. We’ll hunt two at a time.” Then he picked me and Danish hunter Jens Ulrik Høgh to take the first shift. The rest would find potable water and keep the fire going with peat delved from around our rock. 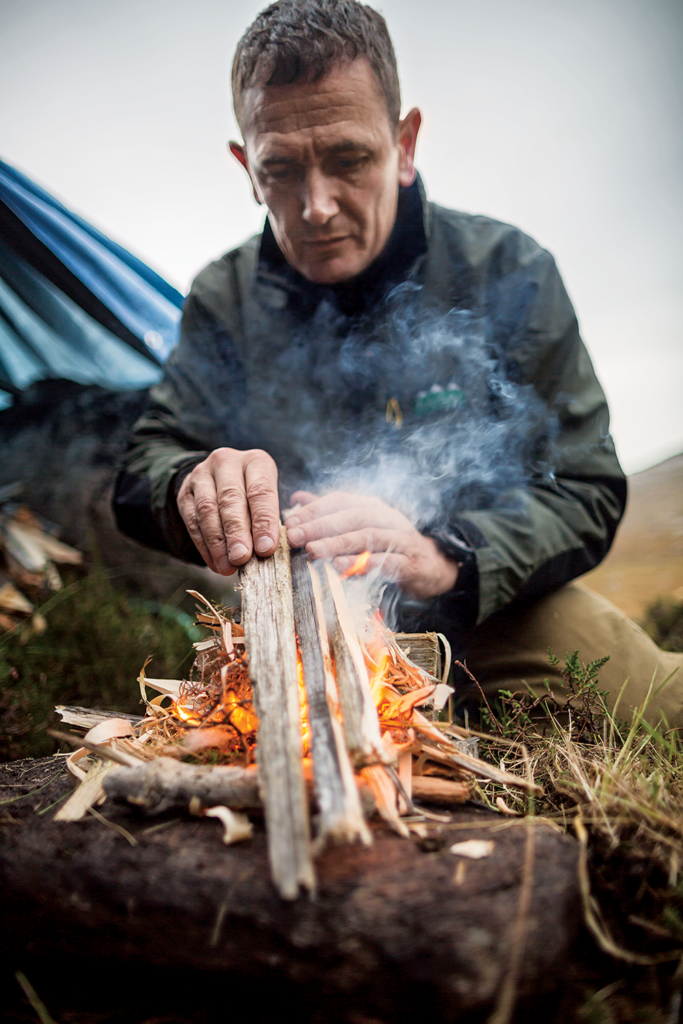 I was honored to be chosen as one of the castaways’ first hunters, and eager to provide for my mates. A red-deer haunch roasting on our fire would certainly raise everyone’s spirits.

It turned out their confidence in me as a hunter was misplaced. Høgh and I made stalk after stalk on small groups of stags, but each time we got within 400 yards, fog would descend and obscure them. When it lifted, the stags would be gone. It was the same story later in the day, with Florian Standke, a German gun writer, as my hunting partner.

The stags were flighty with pre-roar jitters, and they flitted around the island in little herds. Every time we got close to a group, they either disappeared into the gloam or scattered like grouse. The series of near-connections with stags escalated. With each failed stalk, we became overeager and rushed the next one. I’ve long maintained that to hunt with an appetite is to hunt with sharpened senses. But at our point of desperation, hunger became an impediment. We became clumsy with weakness and impatient when we should have waited. A starving hunter is a careless hunter, I realized with a grumbling stomach.

That afternoon, we watched a group of stags ascend a distant stony ridge. The wind was right, and I knew we could ambush them in the high rocks. “Can’t risk it,” Woodhall concluded after long consideration. “We might get up there at sunset, and we might kill a stag. But what then? It would be dark by the time we got him out of there. The rocks are slick and steep. Someone might fall. We can’t afford an injury. And what if we don’t get one…?”

He was right. I had rarely before been required to think about the worst that might happen while hunting. But in survival mode, every action becomes a caloric and physical risk. Finally, Woodhall called it. We marched back into camp, avoiding those hungry stares, and tucked into the limpet-and-seaweed soup.

A RUINED COTTAGE
Late in the day, we held a powwow. With the disappearance of our protective tarp, the rock had lost its appeal as shelter. There was a ruined fishing cottage on the other end of the island, Woodhall said. It doesn’t have a functional roof, and its walls will barely hold back the wind. But it has a fireplace and chimney we might get to draft. The vote to relocate was unanimous.
We gathered our sodden possessions, as well as that precious blackened chocolates tin, and slogged across the peat bogs and rain-slick rocks of the island. The minute we spied the shattered “bothy,” we quickened our pace. After the rock, its three walls and rock chimney made it look palatial. We might be hungry, but we’d likely be dry. 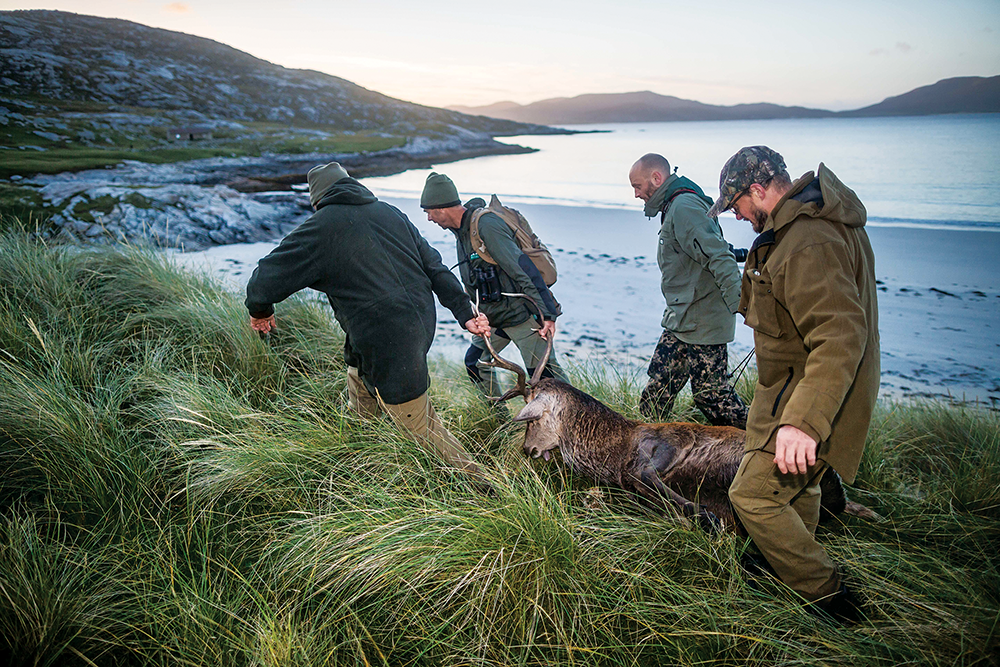 Dragging a stag to the beach.

In the evening, the weather began to clear, and another pair of hunters failed to bag a stag. I had been without solid food for 48 hours, but strangely, I wasn’t hungry. There was too much to do to dwell on my condition.

We found water that hadn’t been spoiled by sheep. We collected wood for our fireplace. We wove hammocks out of discarded fishing net. I discovered that the focus on these mundane tasks took my mind off my privation and gave me a sort of clarity. Collect wood. Build shelter. Carry water. Feed fire. Our needs were stripped to the most elemental, and we found ourselves functioning as a small, capable community. Despite another meatless night, we were dry, and strangely euphoric.

That night, as I rocked in my fish-net hammock, watching the stars from the roofless bothy, I heard the first roar of a stag. The guttural urgency of it was answered by another stag on the other side of our cottage. Maybe tomorrow…

MEAT AT LAST
For the second night, I did not sleep, and when I noticed the stars start to dim, I felt a hand on my shoulder. It was Woodhall. “Don’t make a sound. Gather your gun and meet me outside.” 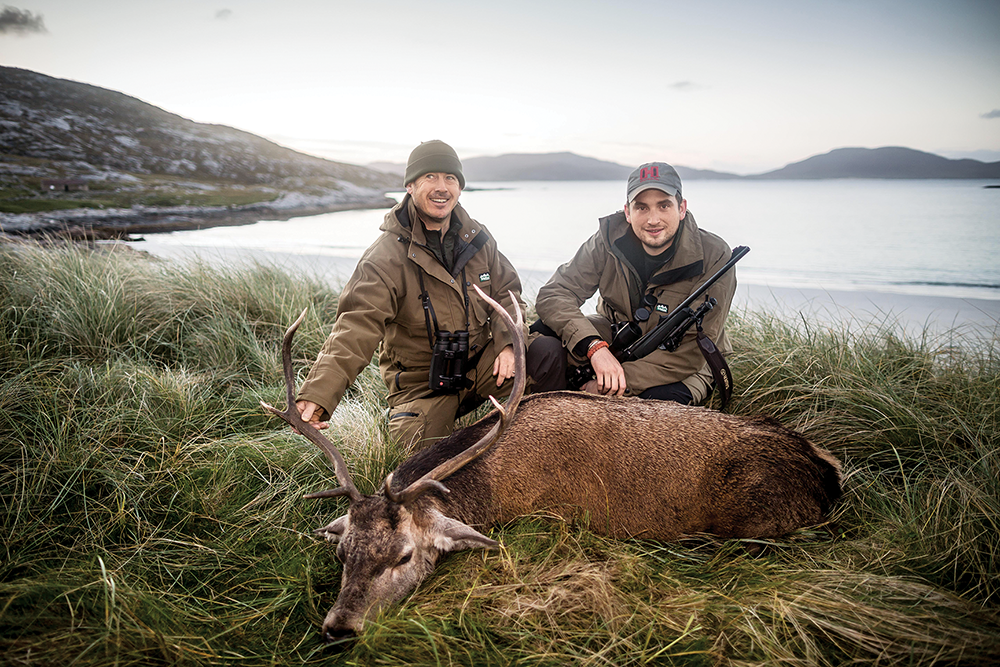 Waiting with Woodhall was Julien Gingembre, a French hunter whose campfire stories of Bordeaux boar hunts had enthralled me. As the eastern sky started to lighten, we heard roar upon roar just over a hill from the shack.

“We must be quiet,” Woodhall whispered. “They are just over that rise.”

Halfway to the crest, I looked back. Our fellow castaways were outside the bothy, watching our stalk. At the final rise, Woodhall and Gingembre went on. I stayed back. If the stags were there, there would be no need for a second rifle. 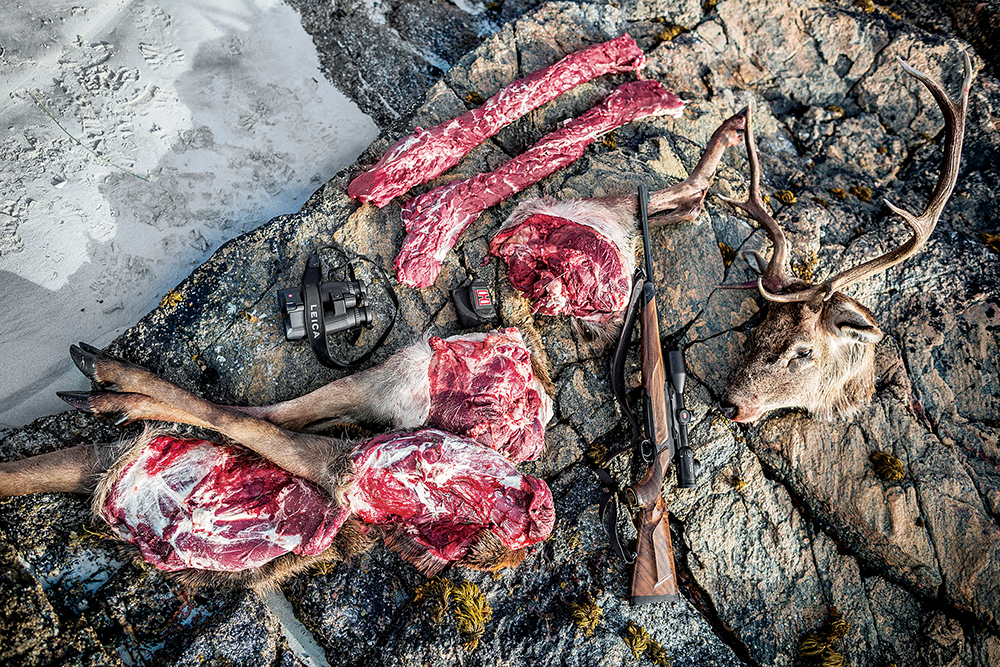 I can’t recall giving more genuine thanks than I did when I heard a single rifle shot. When Woodhall waved me over, Gingembre was standing beside a stag, weeping like a child.

We dragged the deer to the beach, and like a tribe of butchers, started taking it apart, everyone working on a different piece. Someone got a driftwood fire started on the white-sand beach, someone else removed the heart and liver. I cut out the backstraps. Soon, we had liver charring on the fire and tenderloin roasting in the coals. We were laughing and smiling with meat juices running down our chins. 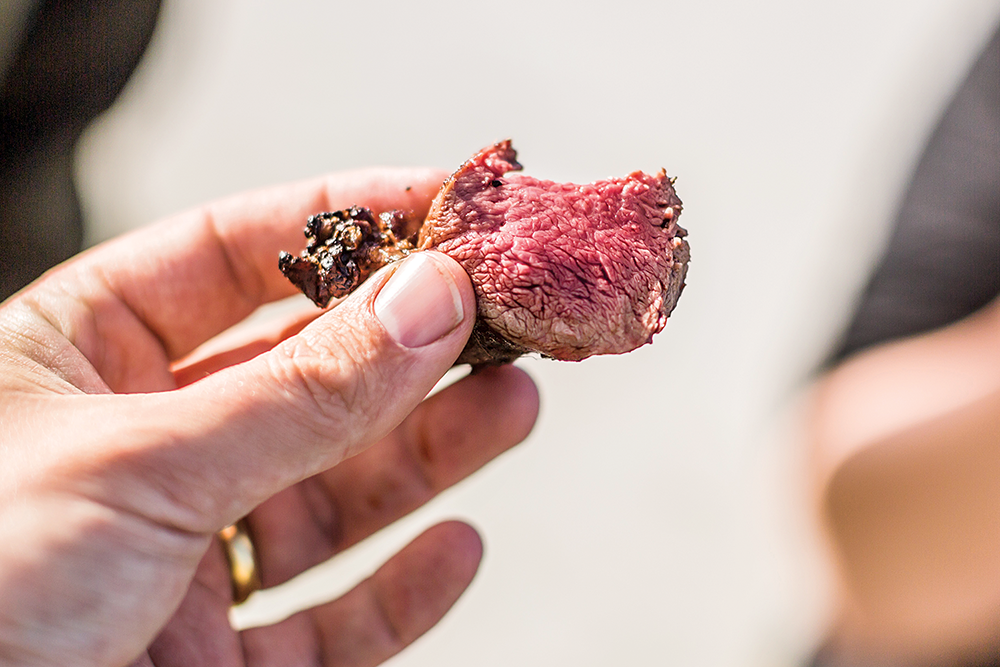 A bite of tenderloin.

Hours later, when the recovery boat rounded a point of the island and chugged into our bay, no one was overjoyed to see it. Yes, we were ready for baths and beds, but we weren’t eager to return to a world of predictability. We were castaways, and despite being gathered back up from our social experiment in hunting, probably always will be. But even more important, on Taransay we had been reminded of the elemental basis of hunting, and the life-giving—and cheer-lifting—gift of meat. 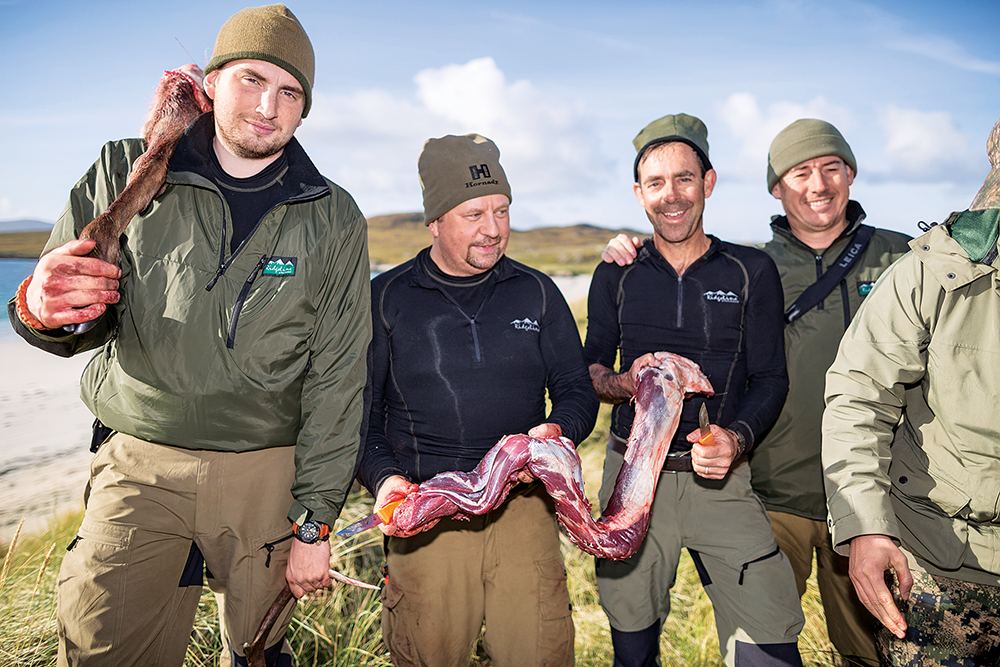