Just because deer season has come to an end doesn't mean you need to put the guns up. 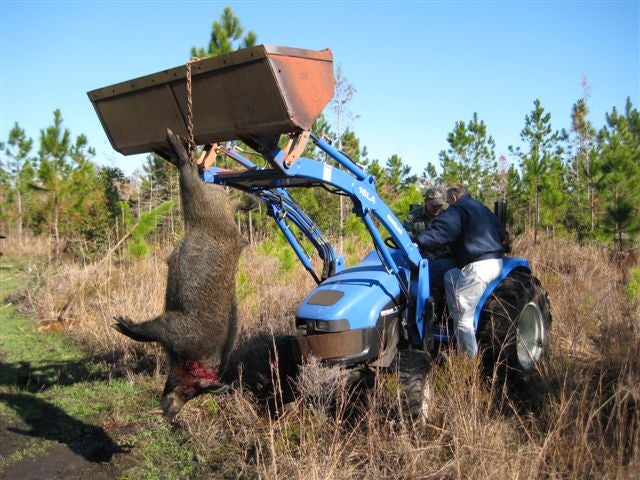 Most hunters have already cleaned and stored their firearms by the time the holidays roll around, but there are still plenty of hunting opportunities throughout the country, from varmints to upland game to big game. Not only will you enjoy hunting when the weather is cooler, but you’ll also compete with far fewer hunters, if any. Here are some options you might want to consider.

Feral pigs now roam in about 30 states, and it’s said that in just a couple of decades they’ll be well entrenched in all the Lower 48. Big boars are usually the goal, but I prefer an 80- to 100-pound sow, which is fantastic as table fare. Florida, Texas and California offer the bulk of wild hog hunting in the U.S. I’ve hunted all three many times, on both public and private land.

A favorite spot is the Nail Ranch in Texas, which conducts hog hunting January through March. These are one-day spot-and-stalk guided hunts, in which you can take the primary animal of your choice and additional ones for a modest fee. The ranch is located near the town of Albany, a two-and-a-half-hour drive from Dallas. (325-762-2974; nail-ranch.com)

South Dakota gets my vote as having the best pheasant hunting in the country. That’s an opinion based on my having hunted there and in most of the top pheasant states over the past 35 years. Mild winters have allowed birds to achieve exceedingly high populations, and each year the numbers continue to improve.

My top pick is near Pierre, with outfitter Cody Warne. I’ve hunted with Cody for 15 years, and it’s not an exaggeration to say that his management techniques have allowed him to maintain 7,000 to 8,000 birds. Because he has a preserve permit, he can offer hunting through March. Prepare for cold weather, as well as the best pheasant hunting of your life. (605-224-1445; warneranches.com)

There is a bountiful supply of cottontails in Eastern Montana, which offers superb hunting in January and February. My favorite technique is to hunt them with a scope-sighted .22 on a very cold morning when there’s snow on the ground. Look for them in prairie-dog towns, where they often take over burrows, or in rim-rock and other places that provide cover.

Many ranchers will allow you to hunt their land for rabbits, and there are tens of thousands of acres of BLM lands administered by the U.S. Department of the Interior. My favorite spots are near Miles City, Broadus and other places in the eastern region. Montana has no season or limit on cottontails, so you can hunt to your heart’s content. Bring a cooler, and skin, dress and cool your quarry quickly. You’ll be rewarded at the dinner table. (Custer National Forest; 406-657-6200; fs.fed.us/r1/custer)

Nevada has more public land than any other state in the Lower 48, with more than 90 percent of the state administered by the BLM and the U.S. Forest Service. It also has a huge supply of coyotes, many of which have never heard a predator call.

At this time of year, the best coyote hunting is in the low- to mid-elevation areas, where there is better access and less snow. I prefer hunting them in piñon juniper forests, where the terrain is more rolling. Set up on a high point with good visibility.

I also hunt valleys where sagebrush is dense, offering plenty of cover. Coyotes will bed and hunt there; the downside is that you often won’t see them until they’re on top of you. This is big country: Use a flat-shooting rifle you have confidence in. (775-688-1500; ndow.org)

Most lion hunts in the Rockies take place during winter. Most big-game seasons are closed, and lion hounds won’t interfere with hunters. Moreover, snow’s usually present, which helps you to locate tracks and allows dogs to follow with more certainty.

There are a few ways to hunt lions. You can use a predator call or simply get on a fresh track and follow it, but neither of these is usually successful; by far the majority of lions are taken with hounds. This can be the easiest hunt of your life or the toughest, depending on the weather, terrain and distance you have to travel to get to the quarry. My pick of outfitters is Dick Dodds, who hunts large ranches near Craig, Colo. He uses pickups, ATVs and mules to cover ground during the initial stages of the chase, but it is often necessary to hike a considerable distance to get to the quarry. (970-824-7392; elkhornoutfitters.com)

For information on Jim Zumbo’s books, go to jimzumbo.com.

1) STAY DRY BY CONTROLLING PERSPIRATION. Wear layers of breathable garments that will wick sweat away from your body. Keep your heavier outerwear in your pack, then put it on once you get to your stand or have stopped exerting yourself.

3) MANAGE EXTREME COLD. When it’s seriously cold, mittens are a better choice than gloves. Likewise, wool-lined boots and heavy wool socks, combined with a sock liner, will keep you warmer in subzero temperatures. If you have a real problem keeping your hands and feet warm, use chemical heat packs.