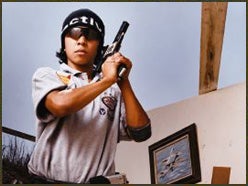 In the end, the last man standing barely came up to the shoulders of his world-class squad mates. But K.C. Eusebio, a 15-year-old Southern California high school student from tiny Diamond Bar, proved he had all the right stuff in a spectacular upset in the 2003 Steel Challenge. “It’s pretty cool,” said K.C. after besting a field that included the best shooters in the world-names like Rob Leatham, Todd Jarrett, Jerry Miculek and Doug Koenig.

Instead of the anticipated duel among shooting legends, the lucrative money match was suddenly between Eusebio, the perfect So-Cal kid in Oakleys, reversed ball cap and baggy shorts, and the gentlemanly revolver phenom from Louisiana, Jerry Miculek. Eusebio was shooting a full .38 Super “race gun,” a semi-auto designed for pure speed; Miculek was using his trademark Smith & Wesson revolver.

The battle came down to the final stage, the Speed Option, with four 12-inch plates at distances of 8 to 20 yards and an 18- by 24-inch stop plate at 35 yards. Miculek shot first, stuttering a bit and then delivering record-setting times for a revolver. K.C.’s first run was par, nothing special. But on his second run his gun jammed. More than one world-class shooter would have fallen to pieces after such an experience. Eusebio calmly reholstered and delivered two more runs at progressively faster speeds that set world records. His fifth run, which won the match, was the fastest yet…so fast that veteran members of the super squad were left shaking their heads.

“What was my strategy after the jam?” said K.C., who’s been shooting since he was 9 years old. “I didn’t have one. It was, like, just go for it. All or nothing, man. All or nothing.”