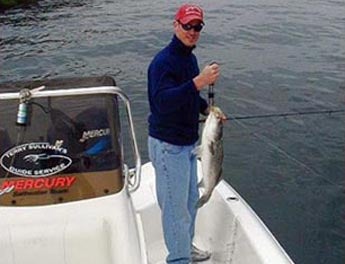 I felt as if I was on my own Nantucket sleigh ride. That’s a nickname for when the working crew of a whaling ship would get into little boats in a big ocean and intentionally stick a harpoon into a 40-ton sperm whale. Then they would hold onto the rope attached to the harpoon and get towed to hell and beyond.

I hadn’t thrown a harpoon. We were outside the confines of Massachusetts’ Plymouth Harbor, and I’d thrown a tube worm tipped with a sand worm over the side of what felt like a little boat, Randy Julius’s 20-foot-long open striper fishing boat. The swells ran higher than the gunwales, and when I could see past the peaked, rolling waves, I was looking at open ocean.

That’s where this big striper seemed to want to go: back out to sea. With my knees braced against the gunwale rim, and the striper pulling line out, I had a newfound respect for those old tars from the 19th century. They were either extremely brave or completely crazy. And with Randy gleefully cackling “That’s a good ‘un” as I reeled, crazy seemed more likely.

When I finally got the fish beside the boat, Randy hopped around me like the pitching boat was a solid dance floor. He leaned over the side and unhooked and released the big cow striper. “That’s what we been lookin’ for,” he chattered. “She was pushin’ thirty-five pounds.”

Up and down the Northeast coast, two different striper events are anxiously awaited-the arrival of the first stripers in spring, mostly schooly fish that range up to 7 or 8 pounds, and later, as the seawater warms sometime in June, the arrival of the big breeders, usually running 10 to 20 pounds, but sometimes pushing 50.

Both events elicit their own wave of excitement as the news spreads quickly that the stripers are in. Grown men and boys-and women, too-will stop whatever they’re doing to go striper fishing. With surf rods and boat rods rigged with Kastmasters, Rapalas or a host of other lures, or baited with sand worms, eels, squid or pogies (menhaden), they’ll drift with the tides, look for the rips and watch for feeding shore birds that might indicate a school of stripers. And if the stripers aren’t there, chances are the bluefish will be. Also a formidable opponent, a summertime bluefish can wear out even the most fit angler.

By sea or by land
Yet stripers can be accommodating, too. After releasing the fish, Randy decided that I’d been knocked around enough. We motored back into the bay, put down the wire-lined poles and sight-fished the flats for feeding stripers with fly rods. Cruising at trolling speed until we saw feeding fish, I watched huge schools of forage fish scoot away from the shadow of the boat.

When we found a pod of fish rooting with their tails out of the water like bonefish, Randy beached the boat on a sandy shoal and we stalked to within casting range. We really didn’t need to be stealthy: Schooly after schooly hit the custom-made popping bug that Randy had given me. He ties it on a stainless steel hook with a high-density foam ear plug near the eye, which he cuts flat on the front and varnishes. He adds white saddle hackle and some Flashabou for a tail, and that’s it.

Best Striper Waters
These scenarios play out in the Chesapeake and Delaware bays, around the tip of Cape May and past the Barnegat inlets in New Jersey. Also try the big fish waters of Montauk Point on Long Island, past Rhode Island’s Narragansett Bay and Nauset Beach on Cape Cod, or venture northward to Plum Island, New Hampshire’s Great Bay and up the Down East coast of Maine to Popham Beach. Stripers are even being landed in Boston Harbor now. Wherever the waters are right and the feed abundant you’ll find anglers galore, usually catching fish. An excellent guide to the best shore fishing from New Jersey to Maine is Frank Daignault’s Striper Hot Spots (1994, Globe Pequot Press).