Why wait till spring to catch the makings of a fish fry? 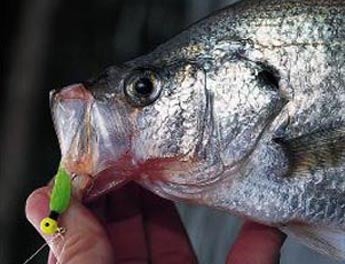 A pal of mine tried to make a move on my freezer the other day. He spent a lot more time turkey hunting than he spent crappie fishing last spring and he was out of fillets, though still hungry for them. I showed no mercy.

“Go fish now,” I told him. “Avoid the spring rush. The mobs. The boat flotillas.” I don’t know if I convinced him, but I did manage to keep my stash of crappie fillets intact, although I did notice it was getting low. That’s easy enough to fix, however; crappies are quite willing to bite in the cold.

Northern migration Once the big chill sets in, crappies begin sliding offshore and into deeper water in the North. Basically, they retreat to the mouths of creek arms or large bays, but their winter deep-water hunting grounds vary with the type of lake or reservoir. In bodies of water whose main structure is a river channel with secondary channels off it, they’ll be right on the drop or down in the channel. Ledges with steep drops are favorite hangouts in other waters, as are deep holes in bays, along with deep flat areas. A favored winter depth in lakes I’ve fished around the country is 30 feet. Fish could be 10 feet or so to either side of this magic mark. You’ll often discover cold-weather crappies hunting minnows where the preferred depth pushes toward shore adjacent to deep-water points, humps or bars rather than on the structure.

** THE SOUTHERN BITE**
In the balmy South, however, weather changes aren’t so dramatic and there’s usually a late fall bite that might not be deep at all. In many natural lakes and highland reservoirs south of the Mason-Dixon Line, crappies hunt on flats and humps partway into major creek arms. They might be as shallow as 7 or 8 feet. They might also chase minnows in stump fields that are even shallower. What they’re mainly looking for are surface-oriented, end-of-summer bait schools.

The same thing occurs in shallow, flat-country lakes down South, although such waters are affected sooner by cold weather. If a fairly large river feeds a flatland reservoir, however, you can still find good fishing after the first cold snap in relatively shallow water. Head for areas 10 to 15 feet deep up primary tributaries. Pools with easy slopes near inside river bends are usually the ticket in such man-made lakes.

STRAIGHT DOWN AND SLOW
Vertical fishing and snail-paced controlled drifting or trolling are the two tactics that’ll put slab specks in your boat once you’ve located schools. To find crappies in deep water, watch the sonar and look for the groups of blips with telltale bait clouds above them. Then work the school vertically with tandem jigs or a tandem jig-and- minnow rig. Keep your offerings subtly swimming just over the school, tempting the fish to come up. Aggressively dropping lures or baits into the school is usually far less successful in winter. Even when it is successful, a hooked fish fighting through the school can scare off the whole bunch.

THE MORE, THE MERRIER Then there’s the multi-rod approach. The first time I saw W.T. “Snake” Womble in his boat at Jack Wingate’s Lunker Lodge at Lake Seminole, my impression was of a giant spider at home in its web. Womble was a pioneer in what has become known as “spider rigging” among crappie fans.

Variations are many, but Womble’s setup consists of a skeletal framework fitted in the bow area of his johnboat just inside the trolling motor. Rod holders are attached to the frame. In full battle array, nine guide-fitted telescopic poles, each 17 feet long, are fanned out in front of the angler. The port and starboard gunwales also are fitted with holders, the poles adjusted to be somewhat shorter than the bow rigs. An electric motor is in the stern. The primary power is one of those Go-Devil motors that can get through most everything. With all poles out, Snake can fish about a 38-foot swath.

FISHING SIDEWAYS
Some multi-rod crappie specialists pass on spidering and fish all their rods from one side of the boat. In this case the primary electric motor is mounted on the side of the boat near the stern. The boat is moved along structure such as drop-offs slowly and more or less sideways. Roger Gant, a guide on Tennessee’s Pickwick Lake, has fine-tuned this approach.

Gant uses bait-casting reels for precise line-stripping depth control. A piece of tape marks 15 inches up his rod butts and that’s how he measures out line. Though ultralight jigs are his choice when fishing shallower water, most cold-weather crappie aficionados I know go to larger Â¼-ounce baits in the cold. You only need to look at a crappie’s big mouth to realize that the fish have no trouble inhaling a larger lure. Heavier baits go deep faster and make control in wind far easier. The trick is to fish them subtly with no jigging and allow the natural motion of the boat and waves to impart action. Keep your poles or rods in their holders put watch them closely. If a rod dips once, set the hook instantly or you’ll be too late.

If your sounder shows fish spread out over a flat rather than suspended, make sure your baits are cruising just off bottom. One more trick: If you haven’t found crappie schools in the logical places, look for some deep water around pilings of boathouses or a drop-off at a boat ramp and give those waters a try. Such spots often hold crappies well into the cold-water season. Because you won’t have to travel so far, you’ll save money on gasoline and avoid a chapped face in the bargain.