Trout congregate in specific areas of a lake during ice-out, turnover and late spring. Here's where they are in each period. 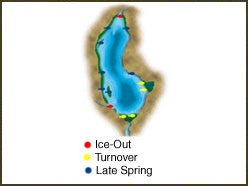 We heard your sorry cries of woe: “Streams have seams and rapids and eddies and riffles. With a little know-how you can take one look and tell where the trout are holding,” you said. “But lakes are another matter. They’re featureless, flat expanses of water. Fishing one, especially a large one, can be like looking over a desert and wondering where the oases are.”

Well, wonder know more. We’ve put together a guide that tells you precisely where in a lake the trout will be during the three specific spring periods of ice-out, turnover and late spring/early summer. We’ve also included a list of the tactics, flies and lures that work best during each period.

But that’s not all the good news. You should also realize that lakes often hold much larger trout than streams do, and that during the early season they’re hungry, very hungry — think about it, they’ve been lingering under the ice for months. But it’s not just that they’re starved; the spiking water temperature is also switching their metabolisms into overdrive.

Ice-out can offer some phenomenal action. The best time to be on the water is from when the ice first leaves to a few days after. During these turbulent days trout are eager to gain back the pounds they lost — up to a third of their total body weights — during the winter season. The breaking up of the ice also allows a rush of oxygen into the water, which supercharges the trout with an urge to eat .

I once hit Montana’s Duck Lake as the ice departed in front of my eyes. The fishing was so hot it took three of us just two hours to land 45 rainbows, most of which weighed over four pounds. The largest of them measured 29 inches and weighed over 10 pounds.

During ice-out one of the best places to find trout is near inlets. Inlets are the areas where streams or a narrow channel that separates the main water from a bay enters a lake. Trout can be found in and around inlets at this time because the stream washes forage into the lake and because streams offer ideal spawning habitat for rainbow, cutthroat and golden trout. When fishing inlet areas, anglers can encounter moving water and should fish such areas as they would a stream by casting toward the inlet and retrieving the lure or fly as the current carries it into the lake. Because trout may spawn around inlet areas, egg imitations work well when drifted a few inches above the bottom. They can be fished off a fly rod or traditional bait-cast or spinning gear. Inlet areas also draw baitfish, such as shiners, dace, chubs and sculpin, which provide ample reason for anglers to throw plugs and jigs.

Flyfishers can mimic baitfish with a variety of streamers, Woolly Buggers and Muddler Minnows. Pre-spawn and spawning trout, which are often present at inlets, are extremely territorial and will strike baitfish that invade their comfort zone.

Shallow shoreline areas also are prime places to find trout throughout the spring. The fish follow the shore looking for suitable spawning habitat and a plethora of forage options, including aquatic insects and crustaceans, such as scuds, leeches and midge larvae. The shore where the wind is coming off the water typically draws the most fish. This is because the wind and wave action uncovers gravel for fish to spawn on and roots up a variety of forage items.

Turnover
A week or two after ice-out, lakes begin their warming process, called turnover. When ice-out occurs, the water is near 32 degrees at the surface and a little warmer with increasing depth. As the air temperature rises, however, warmer water from the lower levels of a lake mix with cold, oxygen-saturated surface water. This moves the water toward a common temperature, usually somewhere around 39 degrees. Wind mixes the water and nutrients, which are brought from the bottom levels, and spreads them throughout the water column. Warming weathernd sunshine also help the temperature rise until the lake settles into temperature zones, with the warmest on top.

Like the oxygen blast fish receive at ice-out, the warming water rejuvenates fish. Trout find food and feed steadily at all levels, down to about 30 feet. That tends to spread fish out a bit, but the trade-off is that almost any attractor fly, spoon, jig or leech will draw strikes at this time.

Flyfishers catch a lot of fish on midge imitations fished off sinking and floating lines during turnover. When fishing a sinking line with a midge imitation (Blood Midges, Brassies, Chan’s Chironomid and the TDC all work well), use the countdown method. To do so, begin by retrieving the fly just under the surface. Then on each successive cast let the fly sink progressively deeper by waiting longer and longer before retrieving it. When doing so, keep track of how many seconds the fly is allowed to sink on each cast so that when you find the depth where fish are holding you can repeat the scenario.

Outlet areas also draw trout during turnover because surface and subsurface currents that carry aquatic insects and baitfish meet here. Focus on outlet areas that offer a shallow flat that has a deepwater “security area” nearby. Fish these areas during the morning and evening hours when trout are moving out of the depths and into the shallows. Small leadhead jigs fished over a flat near the edge of a drop-off are often extremely effective in this situation.

Late Spring
Shallow flats are the most important areas to fish during the late spring/early summer season, and fortunately they can be found in abundance on most lakes and reservoirs. As mentioned, trout follow the shoreline and accompanying shallows during spring, seeking suitable spawning areas and food. Shallows also are the first areas of a lake to produce aquatic plant growth, which attracts insects, which then lure fish.

During the spring season, anglers might encounter hatches of blue-winged olive, Callibaetis and pale morning dun mayflies, a variety of caddisflies, midges, damselflies and dragonflies. Freshwater shrimp (scuds) and leeches are present in weedy areas, too. Typically, midges are present in the morning and evening hours, followed by damselfly nymphs, dragonfly nymphs and a variety of caddis and mayfly nymphs. Spin- and bait-cast anglers also hook large trout in shallow areas on plugs, such as rainbow-colored Rapalas, copper and silver spoons and leadhead feather jigs. Those offerings are especially effective early and late in the day as trout move out of the depths and onto the flats.

Shoals are also important to trout during late spring and early summer for similar reasons. Shoals are essentially submerged islands, so the sun promotes aquatic vegetation growth in these areas, just like in the shallows. Forage fish are attracted to these areas in good numbers, and that draws the attention of mature trout.

Shoals are especially convenient for trout, because they can move quickly from the fertile shallow water back to the safety of deep water just off the shoal’s edge. Anglers can anchor a boat near the edge of a shoal and cast jigs or leeches off a sinking line and bounce them along the drop-off.

Anglers also should pay attention to drop-offs where trout hide during midday hours, particularly on bright days. When fishing a drop-off from shore, anglers should cast a jig or Woolly Bugger past the drop-off and then retrieve it so the lure crawls up to the edge of the drop-off, just a few inches above bottom. Floating/diving plugs retrieved quickly and then allowed to momentarily ascend in a stop-and-go fashion are good choices, too.

During late spring/early summer, when the water temperature warms, trout also seek underwater springs, which provide the lake with cool water. Underwater springs are easily identifiable; they occur as clean gravel or sandy patches on a lake’s bottom and they often release air bubbles that float to the surface. If the water temperature pushes into the 60- or 70- degree range, you can be sure that fish are holding near springs. Plugs, jigs, leeches and streamers all draw strikes in spring areas when fished within a few feet of the bottom.

Whether you hit a lake or reservoir at ice-out or during turnover, realize that you’re in for some good fishing. Spring is arguably the best time to catch large trout in still waters across the country. Arm yourself with a variety of flies, jigs and plugs and hit it while the getting’s good.

y occur as clean gravel or sandy patches on a lake’s bottom and they often release air bubbles that float to the surface. If the water temperature pushes into the 60- or 70- degree range, you can be sure that fish are holding near springs. Plugs, jigs, leeches and streamers all draw strikes in spring areas when fished within a few feet of the bottom.

Whether you hit a lake or reservoir at ice-out or during turnover, realize that you’re in for some good fishing. Spring is arguably the best time to catch large trout in still waters across the country. Arm yourself with a variety of flies, jigs and plugs and hit it while the getting’s good.