Who needs a gun when you can go with a falcon? 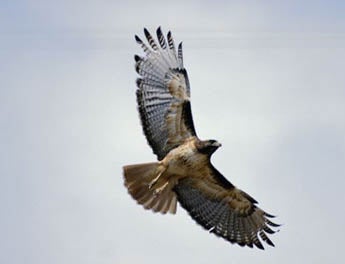 The hawk waits in silent anticipation atop a mighty pine, its eyes watching for the signal as you raise your leather-gloved fist. Spotting the barely perceptible turn of your wrist, the hawk is aloft, its 4-foot wingspan riding the cool air on a rapid open-clawed descent right toward you. For an instant you live a rabbit’s last moment; then the bird alights safely atop your forearm and snatches up the morsel of meat you provide as a reward. The face-to-face interaction with a majestic bird of prey is electrifying.

Few people have had the chance to try falconry because historically it has been the “sport of kings.” Today it’s the most tightly regulated field sport in the country. However, you can experience it at the British School of Falconry located at the Equinox Resort in Manchester, Vt.

The school offers the opportunity to learn to fly hawks and hunt in partnership with them. “The hawks will take pheasant, partridge, rabbit and other game,” says Rob Waite, a master falconer with 25 years of experience. Waite has even seen a sinewy 2-pound hawk subdue a 7-pound wild turkey.

The school’s 19th-century white barn houses a variety of raptors, including eagles, owls and the bird that guests learn to fly-the Harris hawk, a species native to the Southwest. It’s a beautiful creature, a proud 2-foot-high assemblage of chestnut brown plumage, hooked beak and shining eyes.

Although becoming a licensed falconer requires several years of apprenticeship and a comprehensive exam, learning to fly a Harris hawk under the guidance of a master falconer is remarkably easy. That’s because while the birds are never tamed, they willingly stick around for the food.

“It’s an ancient, precarious relationship,” Waite says of humans and hawks. “Unlike a hunting dog, a falcon is its own master and sees us as its assistants. We’re convenient and useful in helping the hawk obtain food it might otherwise have to work harder to get.”

Weighing In
Before leaving the barn to be flown, the hawks are meticulously weighed. A hawk that weighs a few ounces too much is not hungry and may fly off, never to return. Once afield the leather-leashed bird rests atop the hunter’s glove until it is released. Then the beat of its wings takes it to the nearest vantage point, and the hunt is on.

From its lofty perch the hawk’s uncanny vision can readily spot prey, and when it does the raptor responds with a lightning-quick aerial strike. Unlike your loyal golden retriever, however, the hawk has no intention of giving up the catch. Once the bird has killed its prey it will “mantle” the animal-protectively covering the hapless critter with its wings-until the falconer distracts the hawk with a decoy. The kill is deftly slipped into a vest pocket and substituted with a small piece of meat, and the hawk is none the wiser.

After experiencing the outdoors with one of nature’s mightiest hunters, you might become a devotee of the sport. At the very least you will never look at this magnificent bird of prey the same way again as it circles overhead.