The Story Behind the New World Record Mule Deer

This year at the ATA Trade Show there was more than just cool new gear – there was also a... 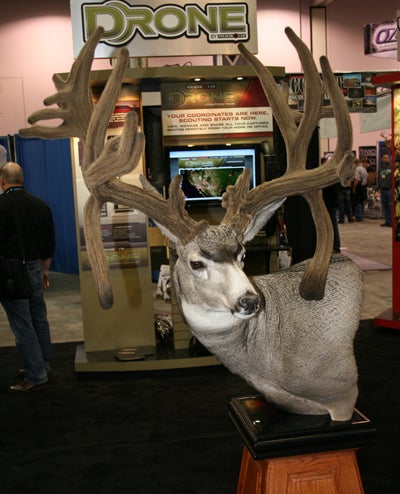 This year at the ATA Trade Show there was more than just cool new gear – there was also a shoulder mount of the new world record non-typical mule deer.

Cody Robbins, television host of Live2Hunt, was after a giant mule deer this past fall in Saskatchewan. Robbins had been hunting the giant muley since 2010, but rarely saw the buck while pursuing it.

It was July 2011 when Robbins once again located the buck. From that day forward, Robbins scouted the buck daily and spotted him on more than 40 scouting days leading up to the season.

September 1 was opening day and Robbins had the buck in his sights.

As Robbins prepared to draw back on the mule deer, it caught his movement and busted Robbins and the cameraman and spooked. It was back to the drawing board for Robbins.

Hopes were still high for day two of the Saskatchewan season as Robbins geared up to ambush the giant mule deer again. The old buck, however, was nowhere to be found. Day two was a bust.

The very next day the game would change and the odds were now in Robbins favor. Robbins and his cameraman located the double drop tined brute and prepared for the long stalk. Patiently closing the distance on the world-class buck.

Robbins was finally able to stalk within only 22-yards of the mule deer without being detected. He drew back his bow and made the hardest 22-yard shot of his career – the arrow flew true and the buck would shortly be in Robbins’ hands.

The “Live2Hunt Buck” as it is called, has double drop tines and was officially scored by three Pope and Young scorers at an incredible 288 inches – more than thirteen inches larger than the current non-typical world record mule deer.

For more record mule deer stories, go to: The Top 40 Typical and Nontypical Mule Deer of All Time