Is This the New World Record Mule Deer?

For the past week or so, rumors have been swirling that a Canadian outdoor television show host arrowed a mule... 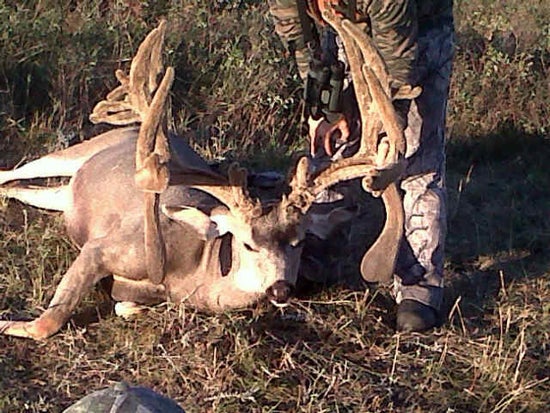 For the past week or so, rumors have been swirling that a Canadian outdoor television show host arrowed a mule deer in Saskatchewan that taped somewhere in the neighborhood of 295 inches. Cody Robbins’ double-droptine buck is purported to have netted 287 inches (green score). If that holds up, it will easily top the current Pope and Young non-typical mule deer record, a deer killed in Colorado in 1987 by Kenneth Plank that measured 274 7/8 inches.

Robbins, a former cameraman for Jim Shockey, is supposed to have killed the deer on September 4. On September 6, the photo you see here was posted to the message board at monstermuleys.com by user BCBOY, who wrote, “Not sure if this is it or not. This buck was posted on another site saying it was an opening day Alberta buck. It is a double dropper like Cody’s is supposed to be and it is Big!”

As with all of these Internet rumors, take this with a grain of salt. But also realize that you could very possibly be looking at the new world record mule deer right now.