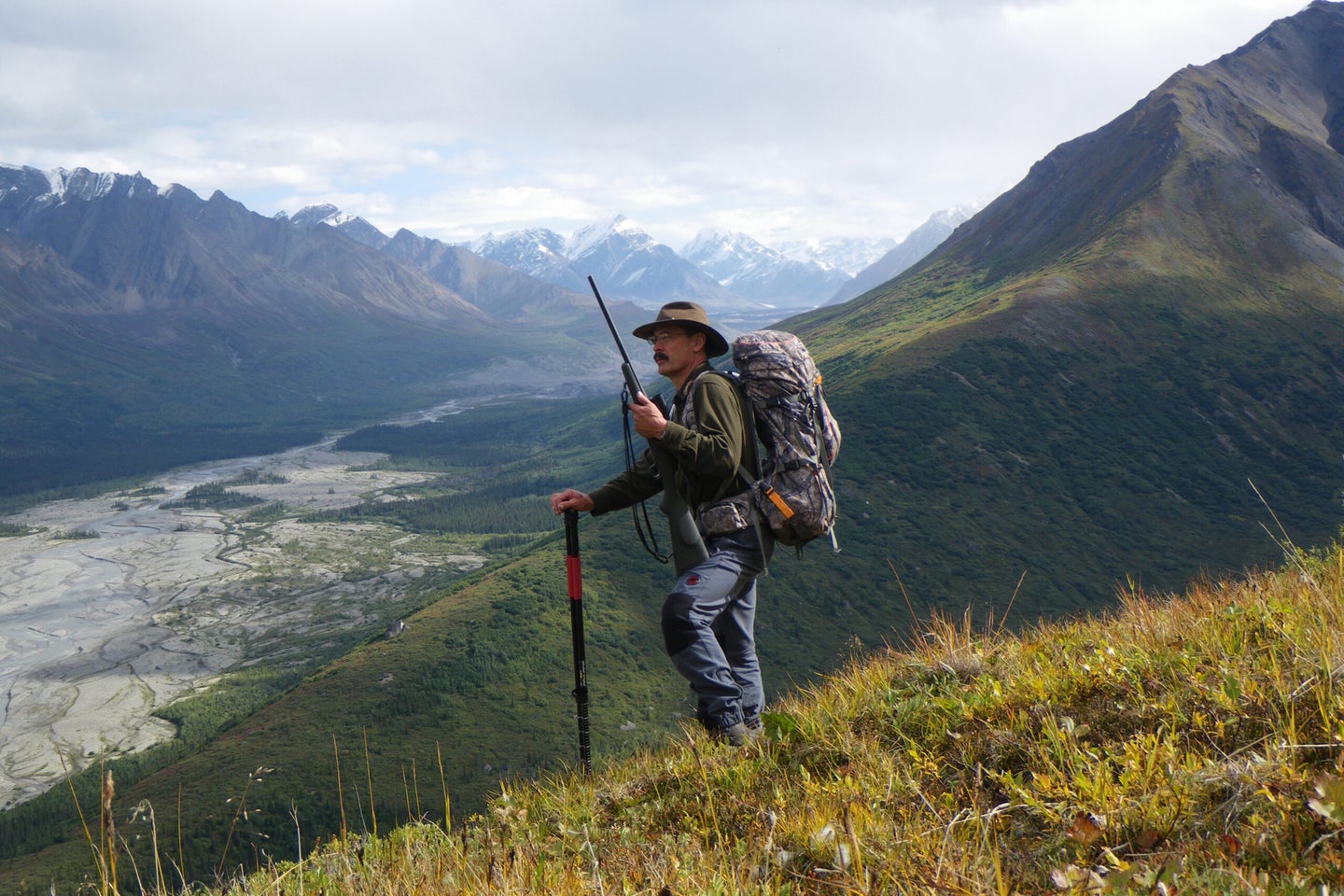 The ­author on a sheep hunt. Ron Spomer

Four Rifles You Should Consider for Hunting Big Game in Alaska

When you ­finally make that dream trip to Alaska to chase sheep, moose, or grizzlies, which rifle will you carry? We bet it will look something like one of these

ONE RIFLE. That’s all an Alaska sourdough needs. But not you. You need more. Because you aren’t up there 365 days a year, biding your time until a moose, caribou, ram, or griz walks past your cabin. As a hunter from the lower 48, you’ve invested time and big bucks for your chance to hunt Alaska. You might as well make it count by choosing the ideal rifle.

However, you can’t choose the right gun for the job until you know what that job is. Alaska big-game hunting could mean chasing Dall’s rams across windy mountain basins or stalking massive brown bears at close range (even if you’re just fishing, you might want a rifle along for backup bear insurance). Plus, there’s the incredible variety of upland game birds, small game mammals, and predators like foxes, coyotes, and wolves. I’ve traveled to Alaska for hunting trips on 16 occasions, and I still feel as if I’ve only scratched the surface of the opportunity there.

Over the decades, I’ve encountered (and carried) four main types of rifles in Alaska. Besides small game, almost any Alaskan game animal and environment can be handled by one of these four styles of rifles.

Regardless of where you hunt in Alaska and what type of game you’re after, you’re liable to get wet—your rifle will too. Maintaining a traditional walnut-blued rifle can be tough, so the north country calls for stainless steel or a protective metal finish like Cera-kote mated to a synthetic stock. The rifle needs to be durable and reliable to thrive up there. You’ll likely be hunting in heavy brush, rugged mountains, or ankle-busting tussocks of the tundra. If you’re extra lucky, you might end up contending with all three of those harsh environments on a single hunt.

Success on any big-game hunt depends upon your rifle functioning flawlessly in the moment of truth, but in the wilderness of Alaska, your life might depend upon it too. You can bet both on this battery of four rifles.

Four Rifles for the North Country

This is a rugged tool for smart girls and boys who forgo a liberal arts degree for an advanced education in outdoor adventure. A guide gun doesn’t need to reach out and touch a distant caribou bull or ram. It needs to stop 1,000 pounds of claw, fang, and muscle. Such a rifle also needs to snap into action quickly. This means light and compact, but also powerful.

This is a rimmed cartridge, the sole survivor of Custer’s command at the Little Bighorn. It’s shorter than a .308 Winchester and cycles slick and quick through a modern lever action. Marry that to a short 18.5-inch barrel and you’ve got the 7.75-pound Marlin 1895 Guide Gun. I would, of course, go with the stainless steel version. Recoil, while not light, is reasonable. You should be able to fire without flinching and recover quickly for follow-up shots.

Ruger, the new owner and producer of Marlin guns, should ­begin cranking out new rifles by late 2021.

This outfit should shoot far and precisely, but it doesn’t require massive power—unless a grizzly comes charging. None did during my dozen sheep and goat hunts. And even then the controlled-expansion bullets I used would probably have sufficed. So don’t be afraid to chamber for light, fast, flat cartridges in the .270 Winchester class.

Sheep hunters prefer a light bolt action. Certainly under 6 pounds, and I like 5 pounds even better.

Melvin Forbes nailed this category with his Model 20 way back in 1988. Short-action, 22-inch barrel, three-​­round magazine, synthetic stock, ­nitride-​coated barrel, under 5 pounds. In .284 Winchester, mine has tipped over rams at 450 yards. The modern equivalent is ­NULA’s fantastic M20.

High-BC bullets and stalking should get you to within point-blank range. This means a simple duplex reticle will suffice, and shooting at reasonable ranges will also minimize wind deflection. Go with tipped, all-copper hollow points for bear insurance.

Given the cost and time required for hunting brown bears, you’ll want to be ready for every chance, whether that’s at 20 yards or 200. A wounded bear counts as a tagged bear, so guides insist on getting close, then closer. Master guide Phil Shoemaker reports little “appreciable difference” from .30/06 through the .300 magnums. “They all work fine. No substitute for shot placement and bullet performance,” he says. In 48 seasons, he’s seen more one-shot kills with modest cartridges (.270 to .300 Win. Mag.) than with larger calibers. Don’t be afraid to use the rifle that you shoot best. My only brownie collapsed from a 300-grain A-Frame thrown by a .375 H&H, but I hit at the high shoulder to take out the spine.

A 22-inch barrel will be handy in planes and brush, a 26-inch will maximize velocity and power, and a 24-inch is the ideal compromise. I’d go with a ­controlled-​feed bolt action. My choice is the relatively light Kimber Talkeetna for its stiff, slim synthetic stock, stainless steel, and balanced feel in my hands.

This flies in the face of our ideal four-­rifle battery, but one all-around rifle really can handle all Alaskan big-game hunting. I have to go with a bolt-action, stainless barrel, synthetic stock, chambered in .300 Win. Mag. My tolerance for recoil has me leaning toward the Bergara Premier Mountain 2.0 rifle at just over 6 pounds. This might be extravagant—many Alaskans carry affordable Ruger Americans on hunts—but it’s also purpose-built.

I’d go with an 2.5X–8X scope that requires no turret dialing, which is a liability in the heat of the moment. The only time I missed a sheep, it was due to that very mistake. Hunting in hard country sometimes calls for a quick reaction when you’re exhausted. Rifles that shoot where you point them, without fuss, win the day.