Where to Shoot a Deer for One-Shot Kills

Most hunters learned to aim for the heart and lungs. That's still your best option, but not your only one. Here's our ultimate guide to shot placement on deer 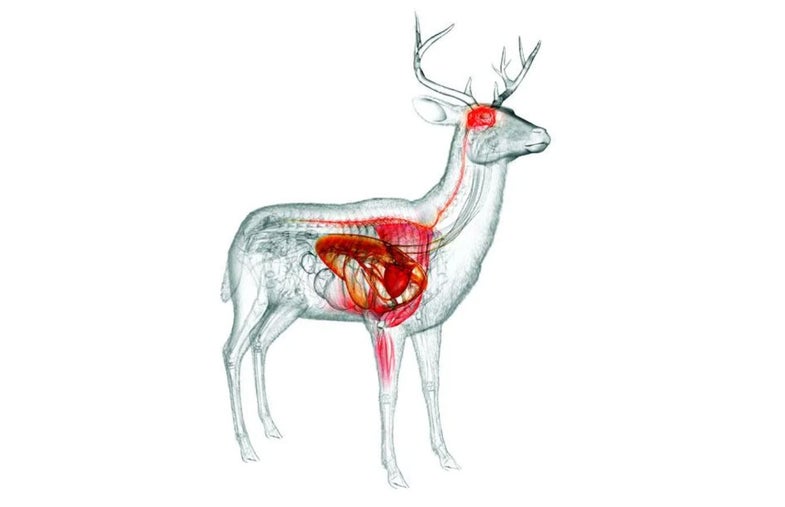 Knowing where to shoot a deer for a quick kill is the goal of every responsible hunter. Most of us were taught that the best place to shoot a deer is the “boiler room,” more specifically the top of the heart and lungs. For the vast majority of hunting scenarios, that’s still the best option. Penetrating these vital organs (with a bullet or arrow) leads to massive blood loss and a quick death. It also results in very minimal meat loss.

So, if you know you want to shoot a deer in the heart/lungs, where exactly should you aim?

Put simply, if the deer is broadside, follow the back of the front leg up the deer and aim just below the halfway point on its chest. Shooting with a rifle, you can edge tighter to the deer’s shoulder. Bowhunters want to hit just an inch or two behind the crease, which allows a little more room for error (more on this later). But there is not much of a difference in aim point for rifle hunters or bowhunters, as you can see in the photo below.

The video below, created by the National Deer Association, does an excellent job explaining where to shoot a deer on an anatomically correct deer target. Look closely at the bone structure of a deer’s shoulder. It is not one solid mass of bone. First the bone angles forward from the leg and then the shoulder blade sweeps back. Understanding this anatomy is especially important for archers who want to avoid hitting these large bones with their arrow (well constructed rifle bullets will easily blast through bones). This is a key difference for bowhunters, there’s simply a much smaller margin of error.

Now, the discussion on where to shoot a deer gets more complicated when deer are quartering away from you or angling toward you. You still want to hit the hear/lungs vital area, but now you must change your aim point. The best way to do this is to visualize where the heart/lungs are placed within the deer’s body cavity and aim so that your bullet or arrow angles through them. In general, this means holding farther back on quartering away shots and farther forward on quartering-to shots.

Many hunters prefer quartering away shots even more than broadside shots. The angle creates a larger margin of error for hitting the lungs. Plus, the deer is facing away from you slightly so it’s easier to draw or shoulder your gun without being detected. Visualize an angle that takes your bullet or arrow through the deer’s heart/lungs and then continues into its offside shoulder, or just in front of it. The photo above is the aim point for bowhunters on this angle. Rifle hunters should aim a few inches farther forward.

Quartering to shots are not ideal for bowhunters. This is because you must hold into the shoulder or risk hitting guts. Lighter arrows and lower draw weight bows will not penetrate through bones in the deer’s shoulder. But for rifle hunters shooting quality bullets, the quartering to angle still presents a good shot opportunity. You must hold into the frontside shoulder now, with your bullet exiting the middle or back of the rib cage.

Where to Shoot a Deer with a Bow: Understanding String Jumping

All of this gets a bit more difficult for bowhunters because so often deer jump the string or duck at the sound of the bow releasing. This is typically only an issue beyond 20 yards. Some bowhunters solve for this by simply aiming lower for farther shots. However there is no rule or formula for shooting deer with a bow.

Here are basic tips and takeaways to deal with deer jumping the string:

Where to Shoot a Deer with a Rifle or Slug Gun

Because rifle bullets carry so much more energy and generally do more damage bones and organs, rifle hunters do have more options besides the heart/lung area. With a heart/lung shot deer often run off, even though they die quickly. A heart shot deer can still make it 100 yards. Some hunters want to drop their deer immediately, but should they be aiming elsewhere? We asked a number of deer cullers, those sharpshooters whose job requires them to kill deer quickly, for their perspectives on bullet placement. Their advice, detailed below, is: “It depends.” On distance, bullet type, shooting ability, and even meat retention. Besides the hear/lung area other options include high-shoulder, neck, and head.

Pros: The ultimate shock-and-awe shot. A big, fast-moving bullet will snap the spine, short-circuit the nervous system, break bones, and anchor a deer where it stands.

Cons: The volatile, upsetting bullets best suited for this shot damage a lot of meat, from the shoulder through the neck and upper backstrap. Plus, it’s easy to miss high when aiming here.

When you sharpshoot deer for a living, as Grant Woods did for 21 years, “you can’t afford misses or wounded deer running around,” he says. Both cost you time and money—especially a wounded, bleeding deer, running for its life and spooking other deer.

Woods, a noted whitetail biologist, did much of his deer-­control work on golf courses. There, shots usually ranged between 200 and 300 yards. His first choice was the double-shoulder shot, with a .308 round entering a shoulder blade on one side, slamming through the body and into the far shoulder blade.

“If you watch slow-motion video of a deer being shot this way, its whole body flexes when the bullet hits,” says Woods. “That snaps the spine. That deer’s never going to move again.” This shot can damage more meat than the heart-lung approach, but the benefit is that the deer will likely drop immediately.

Pros: A deer dies instantly when its brain takes a direct hit. Plus, there is very little meat lost to a head shot.

Cons: The brain is a tiny target, and it’s easy to miss the deer entirely or, worse, to wound it through the jaw.

How do you guarantee a drop-it-where-it-stands shot? For Anthony DeNicola, owner of White Buffalo, a top deer-control operation, it’s all about the brain.

“Draw a line from tear duct to tear duct, then go 2.5 to 2.75 inches above that line, centered,” says DeNicola. “That’s where you want to place your bullet—first and best option.”

A bullet in the brain instantly incapacitates the animal; death follows in seconds. Of course, DeNicola and his team have an advantage over hunters: They shoot at night with infrared optics, from raised, mobile platforms, over bait, at known distances (usually 50 to 60 yards), and (where legal) with suppressed rifles.

DeNicola uses .223-caliber rifles, firing 50- to 55-grain frangible varmint projectiles that expend all their energy into the brainpan. In the urban and suburban environments in which he works, DeNicola can’t afford to have a round exiting an animal.

Second option: A brain shot from the side. Third: A shot just below the back of the skull in the first four cervical vertebrae of the spine.

“The deer drop immediately,” DeNicola says of the vertebrae shot. “Heart and lung functions will cease. They lose consciousness and die in eight to 12 seconds.”

However for hunters, taking head shots is ill-advised.

“There’s simply no margin for error around a deer’s relatively small brain (about 3 inches on the average deer, as much as 4 inches on a large adult buck),” NDA’s Lindsay Thomas wrote for OL earlier this year (Don’t Aim for a Deer’s Head). “Plus, a deer’s brain is a deceptively small target. Yes, a big whitetail might look like it has a large head. But for reference, compare a deer shoulder mount to a skull mount. With the skull mount, you’ll see that the cranial cavity only makes up a small portion of the skull. It would be easy for hunters to misjudge the location of the brain, within the skull, on a live, moving deer.”

Pros: A correctly placed bullet will kill with massive shock to the spinal cord and vertebrae while damaging very little meat.

Cons: The vital area on a neck shot is quite small. Hit low, and you will wound a deer with very little chance of recovery. Plus, this shot often merely paralyzes a deer, requiring a second shot.

Like the head shot, the neck is a deceptively small target. This is especially true for bucks with swollen necks during the rut. Unless the deer is at close range and you are extremely confident in your marksmanship, avoid attempting neck shots and wait for a better opportunity.

Final Thoughts on Where to Shoot a Deer

Unless you’re a professional sharp shooter, the old school deer hunters had it right all along on where to shoot a deer. The best shot placement for deer is through the lungs and the top of the heart, just behind the shoulder. With any standard deer hunting cartridge or any quality broadhead, a well-executed shot here will mean a quick death for the deer, plus a highly visible and short blood trail for the hunter to follow.