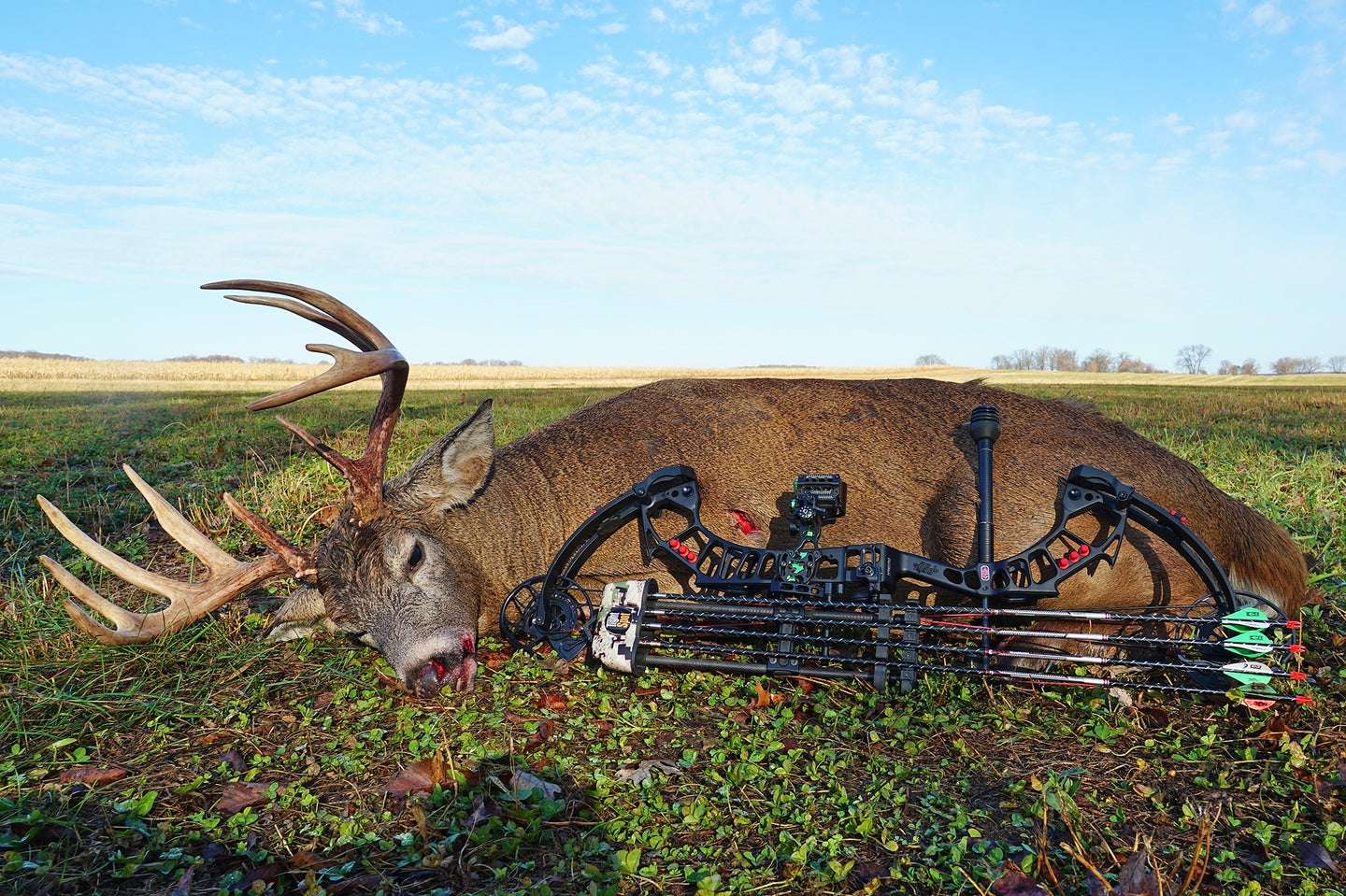 The author's 2022 buck, taken with a mechanical broadhead at 20 yards. Alex Robinson
SHARE

With any good trend, there’s a tendency to slide to the extreme. Take for example the recent bowhunting trend of shooting heavy arrows and hefty fixed-blade broadheads. The idea is that this setup will still penetrate if you hit a critter in the shoulder, which is all true and good and actually a move toward older bowhunting concpets. It’s a needed course correction away from the trend of super-light, super-fast setups.

But some folks have taken the idea too far, advocating for intentionally shooting deer tight into the shoulder and also claiming that mechanical broadheads are simply insufficient for cleanly killing big-game animals. Let’s pump the brakes for a minute.

One of the downsides of mechanical heads is that they require more force to push through a medium. This is simply a caveat of the design. The larger cutting diameters plus their mechanisms for opening require force. Earlier this year, gear editor Scott Einsmann and archery guru Cody Greenwood did an in-depth test on the amount of force needed to push broadheads through doormats, foam, and leather (read their full test here). The fixed-blade heads required less force, hands down. This is important because you want your arrow to fully pass through the deer. All other things being equal, a passthrough creates a quicker kill and better blood trail.

But here’s the thing: Pushing a broadhead through the vitals of a deer does not require an incredible amount of force. Take, for example, the buck I shot this fall. I made a 20-yard broadside shot on a big-bodied Wisconsin 10-pointer (trail cam photo above). My bow set to a draw weight of 60 pounds zipped a Sevr 2.0 (2-inch cutting diameter) tipped arrow cleanly through the deer and buried it into the ground. The buck ran about 60 yards and toppled over dead. This is absolute perfect, and predictable, performance from the best mechanical broadheads.

I realize this is only one field anectdote, but you don’t have to take my word for it. Just watch the videos from my buddy Michael Hunsucker over at Heartland Bowhunter. He shoots an arrow with a 95-grain insert and a 100-grain expandable broadhead, which gives him a total arrow weight of 500 grains. As you’ll see in the videos, he has no issue getting passthroughs on even the biggest bucks.

Most archery deer are killed at 30 yards or closer. Modern compound bows and crossbows (which most hunters are shooting) deliver arrows with plenty of force to push a quality mechanical broadhead through a deer’s vitals at those close and moderate ranges.

In previous seasons I shot a mechanical head and wasn’t getting passthroughs, even with good shots at moderate ranges. The broadhead still killed deer, but I was getting broken arrows and spotty blood trails. Bowhunters should expect better performance than that. In Einsmann’s testing, there was a big difference in effectiveness between top mechanical broadheads and the poor performers. Interestingly, a head being more expensive didn’t guarantee better performance. If you’re going to shoot a mechanical broadhead, you should read his review of the best broadheads for deer and strongly consider choosing either a Sevr or the G5 Deadmeat V2.

In a perfect world, all bowhunters would know how to tune their bow, sharpen a broadhead, and shoot with ideal form. But we live in an imperfect world, and many of the bowhunters I know aren’t exactly masterful at any of those things.

I’m not saying that we all shouldn’t strive to be better bowhunters. But I am saying we should set realistic expectations. If you don’t have the time or skill to tune your bow every season and you aren’t interested in sharpening fixed blade broadheads, then you should opt for mechanical heads. This is simply because they generally fly closer to field points with less fussing. Crossbow hunters will find this to be true as well. And there’s not much they can do in terms of tuning their crosbow, so choosing a broadhead for optimal accuracy is key.

Of all the factors that go into making a clean killing shot on a deer, accuracy is most important. And accuracy is easier to achieve with mechanical heads. Use whatever free time you have in the offseason to practice shooting with your bow.

There’s a reason why bowhunter’s education courses and the National Deer Association instruct archers to aim just behind the crease of the shoulder: It’s deadly.

This shot also allows for some margin of error. Hit a few inches back and you’ll still penetrate the rear of the lungs and possibly the liver. Hit too far forward and you’ll likely strike inside the “V” that the deer’s leg bones and scapula form, still resulting in a heart/lung shot. Either of these three scenarios (perfect hit, a little back, a little forward) are ideal for a mechanical broadhead with a wide cutting diameter.

The only scenario where a mechanical falls short is if you shoot into heavy bones. But in most cases (see my caveats section below) archers should avoid this. Just check out this graphic from the Ohio Deer Trackers group:

The red pins show deer that were found dead and recovered by trackers. The green pins were deer that were hit and then confirmed alive (likely by trail cam photos). The blue pins were undetermined, the white pins were tracked and required a follow up shot.

There are several green pins in the shoulder area, while almost all of the hits behind the shoulder resulted in red pins — recovered deer. Now, it’s difficult to confirm exactly where a deer was hit if you don’t recover it, but the graphic is still telling. Archery deer hunters should aim for the crease behind the shoulder, no matter what broadhead they’re shooting.

Einsmann hunts with a fixed blade and a traditional bow, and aims exclusively for the crease because for the margin of error it offers, and he’s had 100 percent recoveries (all under 100 yards) on dozens of deer.

And yet, some bowhunters have started advocating for shooting tighter into the shoulder, essentially aiming for the “vital V” that the leg bones and scapula create. If you hit this area you will certainly kill your deer. But will you kill him any deader than if you strike a few inches back, just behind the shoulder? Certainly not.

But what about those quartering-to shots? I hate to be labeled a Fudd, but most archery deer hunters should simply pass on these. While a frontal or quartering-to shot can be deadly, the target is much smaller than a broadside or quartering-away shot. And when hunting out of a treestand, deer will often give you a broadside shot or quartering-away shot if you’re patient enough. If a buck doesn’t give you one of those shot opportunities, then he wins the day. No matter how good our gear gets, knowing when to pass on shots is a critical aspect of bowhunting.

Whitetails are not known to be tough game animals. Deer hunters aren’t trying to drive an arrow through a cape buffalo. But many of us hunt deer in thick cover, which can make recovering even well-hit deer a challenge if there’s a light blood trail. For large wound channels and heavy blood trails, it’s hard to beat the best mechanical broadheads.

When to Shoot Fixed Blades

But I’m not some sort of mechanical broadhead evangelist. On certain big-game hunts I switch to fixed-blade heads, and I fully agree that not every bowhunter should shoot mechanicals. If you shoot a traditional bow or shoot a compound at a low draw weight, a fixed blade is better for penetration. Likewise, if you’re targeting large game like elk or moose, a fixed-blade head is the way to go.

If you’re a deer hunter who does a lot of rattling or decoying on the ground and you’re likely to see mostly frontal shots or quartering-to shots, then you’ll want to go with heavy arrows and bomb-proof fixed-blade broadheads.

But to in order to beef up your rig and start shooting critters through the shoulder, you also need to get good at tuning your bow and sharpening broadheads. You must fully understand the anatomy of the animal you’re hunting and how different angles and ranges present different challenges. You need to understand how the animal might react at the shot.

In other words, you must truly master all of the finer details of bowhunting. If you’re not committed to that, then buy the highest quality mechanical heads you can, practice as often as you can, and only take the shots (broadside and quartering away) you’re certain you can make.

When to Switch Your Broadheads

Hunters tend to get defensive over their broadhead choice. If the last few deer you shot were killed cleanly, it’s easy to believe you’ve got the greatest setup of all time. If that’s how you feel, then stick with it, because confidence is the X-factor in bowhunting.

However, you should consider changing setups if you’ve been getting the following results:

There are several good mechanical options out there, and it’s worth upgrading your head even if that means spending a little extra money on the front end. It will save you plenty of heartache in the long run.