In recent weeks, I’ve talked about building arrows that penetrate better. You’ve seen me mention both how having a heavier... 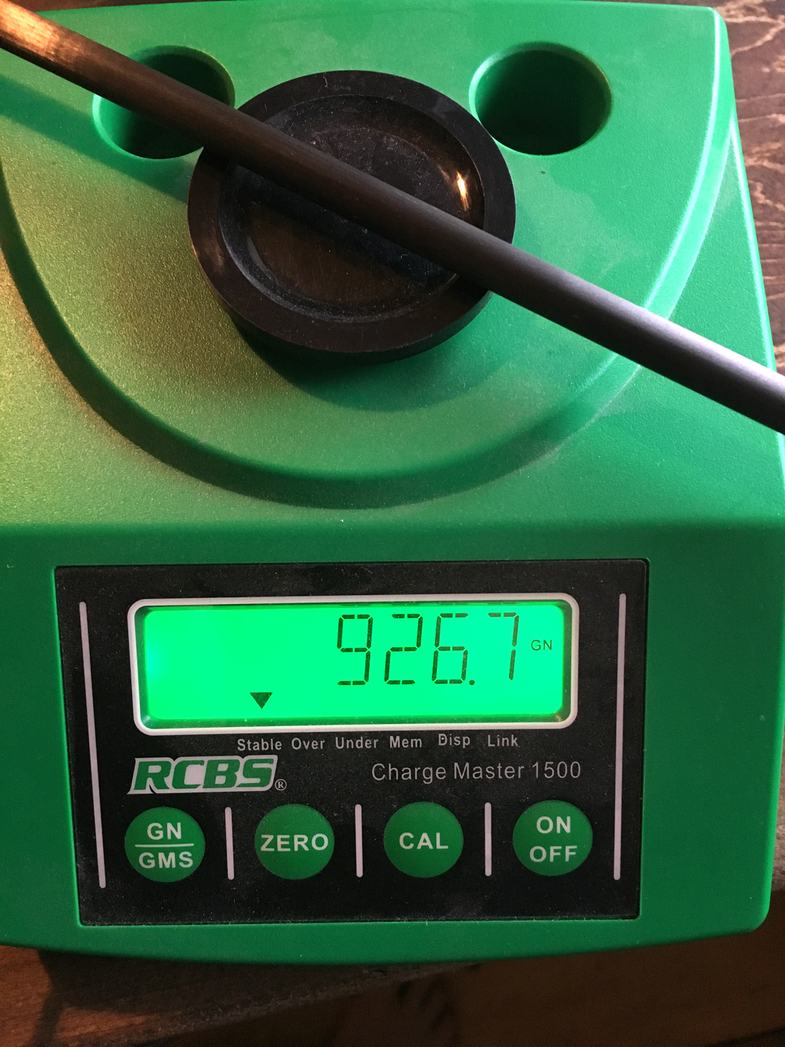 In recent weeks, I’ve talked about building arrows that penetrate better. You’ve seen me mention both how having a heavier arrow and selecting the right broadhead can dramatically increase your penetration and lethal performance on game. But I believe that some of the reasoning and physics behind it are widely misunderstood.

Among archers, I see and hear a lot of discussions about the kinetic energy (KE) of arrows. Even several major arrow manufacturers have KE calculators and recommendations for big game hunting. One, for example, states that 55 foot pounds (ft x lbs) is generally sufficient for big game in North America.

The problem is, that KE really has very little to do with arrow penetration or lethality, and in my opinion, is a useless number to consider as far as archery is concerned.

Now I’m no rocket (or arrow) scientist, but in attaining a Mechanical Engineering degree, I had to deal with physics and develop a somewhat respectable understanding of it. In basic terms, KE is the amount of energy that a moving object possesses. KE is not a force—it’s energy. And in the case of an arrow or bullet, it transfers to whatever object it hits. Most hunters would refer to this transfer of KE as “shock”—when the projectile hits an animal.

KE is used frequently and is applicable to hunting rifles and cartridges. We know that much of the lethal power of a bullet comes from the KE that it transfers to the animal. A relatively small projectile (i.e. a bullet) traveling at high velocity typically causes trauma well beyond the diameter of the bullet. This is because the KE transferred to the animal is significant enough that it causes movement and damage of the internal tissues. Thus the “shock” effect, also sometimes referred to as “knock-down power.” We know that with arrows, this “shock” trauma isn’t nearly as apparent, and that our broadheads cut and cause hemorrhaging. This is because the KE that arrows have is so small that it is ultimately irrelevant to their lethality.

You can easily look up the equation for KE, as well as the simplified equation for using grains and feet per second to get your answer in units of foot pounds:

The key point with KE calculation is that velocity is squared, which makes it a much bigger factor in the final result than the weight of the projectile. To illustrate, here’s the KE that two different arrow setups have compared to a .22 lr bullet:

Now if I were to go by what many arrow companies say, the 350 grain compound arrow would be more sufficient for hunting a moose than the much heavier arrow that has less KE. However, you can see that the .22lr wins big time as far as KE goes. So why can I shoot through a moose with a recurve bow, but we know that the .22lr bullet (which has almost twice the KE) would be grossly insufficient? Why have I seen slower arrows with less KE punch through and break moose and bear shoulders while I’ve seen lighter, faster arrows with much higher KE energy stopped by a moose or bear shoulder? The first part of the answer is that kinetic energy is not a significant factor in penetration.

There are many factors in arrow penetration, obviously including broadhead efficiency and shot placement, but as far as weight goes, heavier arrows penetrate better because they have more momentum. Unlike KE, which is an energy quantity, momentum is basically a force quantity. The more momentum something has, the greater the force required to stop it. Also unlike KE, momentum is directly proportional to mass and velocity, not velocity squared. The equation for momentum (p) is p = mass x velocity, and through simplification, yields units of Newton seconds or pound seconds. You can find simplified equations that allow you to use input of grains and feet per second for momentum as well.

Where bowhunters are concerned, calculating momentum gives us an idea or comparison of how hard it will be to stop different arrows. Assuming factors like broadhead design and sharpness, as well as impact spot and angle are the same, the arrow with more momentum will require more force to stop, and will penetrate farther. To illustrate how momentum is a different entity than KE, here are the same two arrow setups compared to the same .22lr bullet in momentum:

You can see that the heaviest, slowest arrow—that also had the least KE—has the greatest momentum, and all other factors being equal, will penetrate the best. So many bow manufacturers emphasize speed, but arrow speed alone doesn’t translate to a more lethal archery setup. 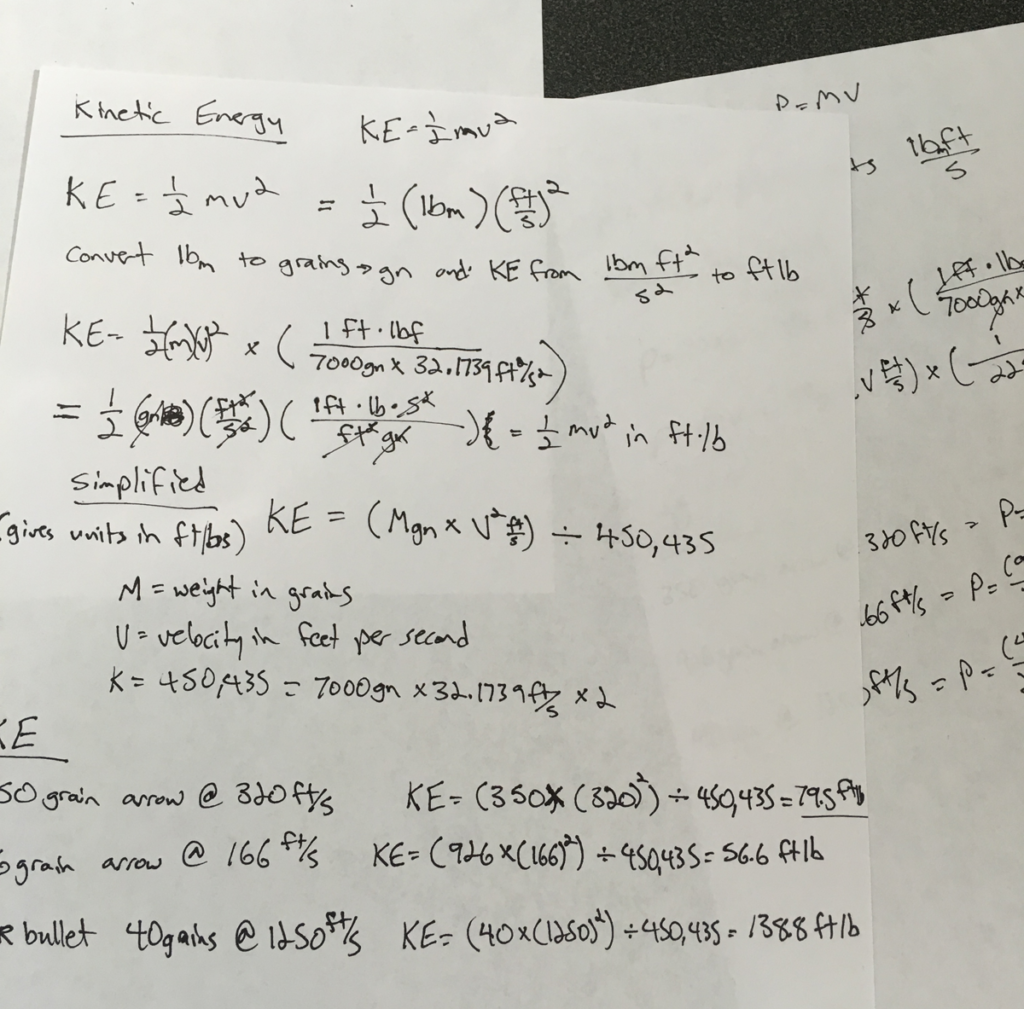 Now momentum isn’t everything either, but it is an important factor. I believe weight and broadhead selection are the two biggest factors in penetration. Many popular broadheads are significantly less efficient than say, a 2-bladed single-bevel head. Couple a less efficient broadhead with an arrow that has less momentum, and you get an arrow that won’t penetrate nearly as well as a slower, heavier arrow with the more efficient point.

I definitely wouldn’t go as far as saying that these light, fast setups are inadequate, because used properly, they work just fine. But it’s something to think about when you are setting up your arrows. Personally, I prefer to shoot an arrow that I know will blow through the shoulder of any moose or deer I could hope to encounter, should my shot be slightly off its mark. A re-hashing of what shot angles are ethical is a can of worms to open up another time, but if you properly select your equipment, the “accepted rules” become much more flexible and forgiving. I would encourage folks to always be selective in the shots you take, but also use equipment that gives you the best chance of quickly killing and recovering your animals, even if you don’t quite hit your mark.