I’m tough on my equipment. I use screwdrivers as pry bars, crescent wrenches as hammers and pliers as wrenches. So,... 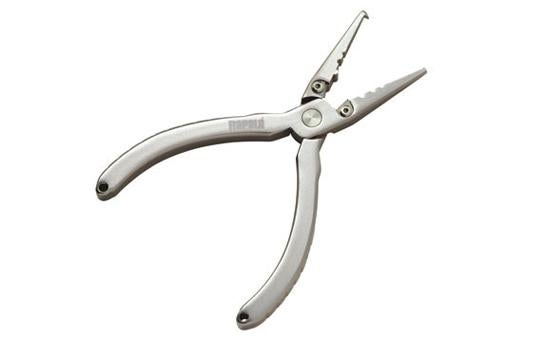 I’m tough on my equipment. I use screwdrivers as pry bars, crescent wrenches as hammers and pliers as wrenches. So, when I received my new pair of Rapala 6.5″ Aluminum Pliers I figured I could break them in short order.

Well, the other day I was running out, leaving for a fishing trip. I saw those pliers and thought it might be a good time to try them out. In the tackle bag they went.

Fishing pliers for me, are one of those accessories that never seem to work, no matter how great the really cool packaging says they’ll work. And I’ve had them all. I’m confident I could stock a Sears hardware department with all the broken pliers I own.

I had a pair once that I welded to my boat’s cranking battery posts while trying to undo a rusted terminal nut. I did find out on that occasion my fire extinguisher worked as the packaging said it would.

One time, I had one of those multi-tools, one with a really nice leather sheath. It was really expensive too — a Christmas gift from my wife. On their first trip to the lake with me, I managed to hook a mudfish. A bowfin (a nasty fish with an equally nasty temper). Well, no worries, I had my “can-do” multi-tool to help me wrangle this fish into submission.

I whipped out my new multi-tool out and moved in to remove that hook. When I clamped the pliers down, the only thing they clamped was half the skin on my casting hand. Startled, I reflexively dropped them into the drink like a hot potato. Hmmm, maybe I can tell her I was attacked by a shark and the pliers saved my life…

So, when I received these new Rapala fishing pliers–I was less than thrilled. However, after a few trips, I can say these are some nice grabbers. The aluminum construction makes them light. We like light. The cutters have inserts of tungsten, so they actually cut fishing line and braid. Imagine that. An internal spring keeps the jaws open for easy one-handed operation. The split ring tool opens split rings and the split shot crimper actually crimps split shots. Novel.

And get this, they’re priced right too — about $35 including the sheath. What’s even cooler is I am relatively confident I can’t weld them to my boat batteries because they’re aluminum. As for using them as a handle for my truck jack, I’ll let you know as soon as I get time to give them a whirl at that.