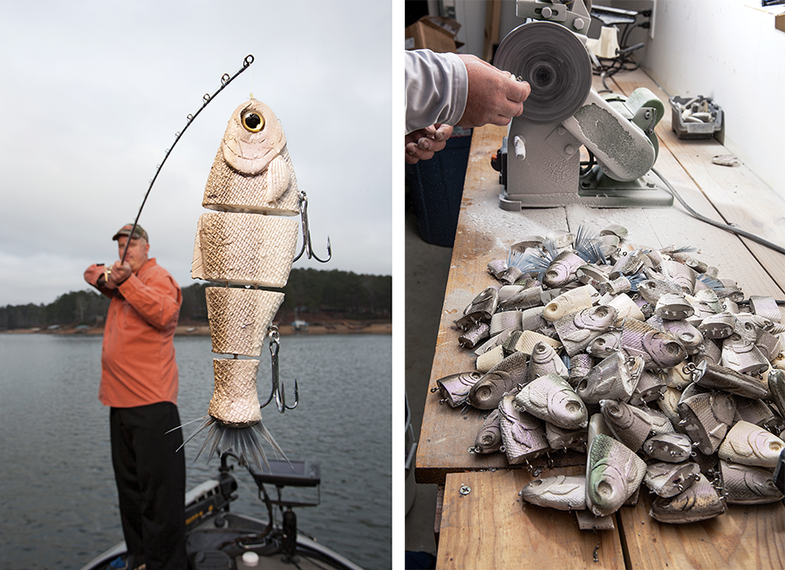 They started like most lure makers do: tinkering in boats and basements, in garages with tools and crude designs. They created a Frankenlure, usually ugly at first or maybe not even functional. They trimmed here and there, added this and that, tried to make it effective, and started over again. And then it worked. Their homemade fishing lures finally started to catch fish. Word got out. More friends wanted lures. Then strangers, via emails and calls. Suddenly, everything went from zero to 60.

Mike Bucca (bullshad.com) has tinkered with homemade fishing lures for three decades—ever since he took his first clients out in the Louisiana marsh as a 14-year-old. A guide friend had overbooked, Bucca’s knowledge of the marsh was solid, and the fishermen he guided that day enjoyed a 20-redfish and 150-trout day. Bucca was hooked, so to speak, on being paid to fish, or at least do something in the fishing industry.

About a decade ago, after moving to northern Alabama, he began tinkering with his Doo Dad spinnerbait creation to fashion what he called the Bull Shad swimbait. He had guided briefly on the Tennessee River, targeting the notoriously difficult bass of Lake Allatoona, but he wanted to catch bigger largemouths and spotted bass there—bigger than 2 or 3 pounds. Instead of downsizing, as many anglers would do, Bucca upsized. Supersized, actually, to 6-, 8-, and 9-inch Bull Shad hard, jointed swimbaits.

Bucca began by painstakingly carving his Bull Shads by hand, attaching the metal connections in the joint and adding a stiff brush tail along with big, vivid eyes. He looked at gizzard shad photos and actual fish. Trial and error, with the lures and presentations in the water, led to hours upon hours of refinement. Before long, he was trying them on other lakes and sending them to friends to fish.

His first Bull Shad “swam like a flounder, on its side,” he says. “It was a very long and expensive learning curve on not only what worked, but what didn’t work. I taught myself everything and really didn’t have anyone to walk me through the steps.”

But Bucca knew that giant bass ate giant baits. If they ate them in California, where legends such as Mike Long caught 15-pounders, big lures could work on Southeastern lakes for huge largemouths, magnum spots, big smallmouths, and striped bass.

His first baits each took hours to create. Today, Bucca has molds that turn out 85 resin-bodied baits at a time before the finishing touches are added. He’s well acquainted with his delivery-­service drivers. Bucca has stopped guiding and now employs a team of six who help him create Bull Shads, which he’s shipped to every state except Alaska and every continent except Antarctica. Australians use them to catch barramundi.

“My goal was to make swimbaits for myself and some clients to fish with on my guide trips,” he says. “Never in a million years did I think I could earn a living off of making and designing swimbaits. But they worked and the business grew from there.”

Ryan Coleman is a fishing guide on Lake Lanier in northeastern Georgia and owner of SpotSticker baits. About a year ago he bought SOB Lures from the widow of the late Bill Dee of Texas. Dee’s famed spinnerbaits had a regional reputation for reliability and durability; the hard clear-coat finish doesn’t crack or fade. Coleman wanted to keep that reputation and name alive to honor Dee and because he’d had a role in developing one of SOB’s most popular lures, the Mini-Me spinnerbait.

“On Lanier, with the clear water, I like smaller spinnerbaits but want to keep them deeper,” he says. “I would hold a bullet weight with pliers and use a band saw to cut a slit in it, and then clamp or glue it to the spinnerbait wire behind the head. We would have a small bait but could work it fast for a reaction bite. I sent some to Bill, because he was known for creating custom baits and colors, and he said that’s what we needed to do. That’s how the Mini-Me got started.

“Everyone really respected the name and what Bill did. There weren’t a lot of people like him, but the world needs more Bill Dees. I wanted to keep that momentum going.”

Ace In The Hole

Phil Hunt of Indiana, founder of PH Lures, was like Dee. He had been painting custom lures for anglers for years but wanted to make his own crankbaits. In 2006 Hunt began turning out shallow runners, square-bill designs, and deep divers. He fished regularly, saw what worked and what didn’t, and began cultivating a list of clients who wanted his special baits.

One of his friends is Bill Lowen, a pro angler on the Bassmaster Elite Series. Fishing on the Ohio River is tough, so to have something extra in the tackle box that might land another bass or three is critical. One weird-looking bait would sputter and spritz. But it would also walk the dog, that subtle slashing maneuver bass can’t resist. Lowen loved it. Hunt loved it. He tinkered some more until they got what is now the Crazy Ace.

Not all lure makers achieve such success. Some fail, and some stay under the radar. Others go from the garage to the penthouse. Coleman bought SpotSticker in 2010 from two Alabama owners and now offers jigs, jigheads, and the SOB Lures line. Bucca’s Bull Shads have won several tournaments and helped Brett Preuett win the Carhartt Bassmaster College Series championship and a berth in the 2015 Bassmaster Classic. Hunt’s lures are gaining a foothold among tournament and weekend anglers alike. All have a common thread: They started with a dream and didn’t quit.