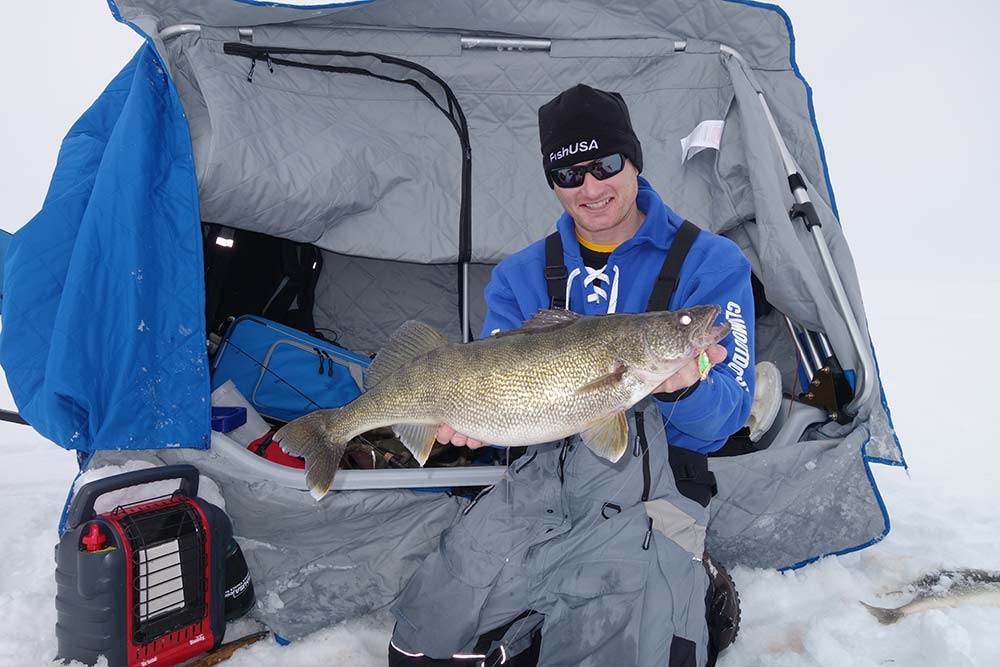 The best lures in your ice-fishing arsenal are the ones that are equally effective at catching walleye and perch. Ross Robertson
SHARE

I like to bundle my gear as much as I can, especially when there are some things, like lures, that are great at catching more than one fish species. By combining lures that are equally effective at catching walleye as they are at catching perch into one tackle box, I can switch tactics on the water, and quickly target perch should the walleyes not be in the mood to bite, and vice versa, without carrying multiple tackle boxes. With that said, the list below contains some of the all-around best walleye ice fishing lures.

But if you’ve thought about consolidating your walleye ice fishing tackle box but don’t know where to start, consider these 10 jigs and lures that are also great for catching perch. A few are classics that continue to produce time and time again, and the rest will likely become classics in the years to come.

This timeless lure should be grandfathered into any ice fishing lures list. While the larger #5, #7 and #9 sizes work great for walleyes and other large fish, the smaller #2 and #3 work amazingly well for perch. When the walleye bite gets tough for me, I downsize to the small sizes for perch, though I recommend modifying it with a larger treble hook versus the one that comes from the factory. A larger hook seems to improve the number of hookups and decrease the number of lost fish. Another good trick is to place a small split ring on the attachment point to make changing hooks easier, create a little more action on a tipped treble, and give fish less leverage to throw the hook.

The key to being a good ice fisherman is not just about catching fish, but catching high caliber fish. Though I realize when a school of perch moves in and gets fired up, hooking into the keepers and not the throwbacks is often easier said than done. The Slab Rap has a much less aggressive swimming motion than its cousin the Jigging Rap. This plastic bait’s subtle action is similar to other lures that are made out of balsa, and because the movement is so appealing to fish, you can use it bait free and the smaller fish seem to let it be. There are two pint-sized models available, a 1 ½-inch 1/8 ounce and 2-inch ¼ ounce, and either works exceptionally well for catching keeper-sized walleyes and perch.

The Rattle Streak is one of my go-to baits for Great Lakes walleye and perch, whether I’m fishing on open or hard-water. This jig has flatter sides than many other similar lures, and while sizes are available up to ¾ ounce, the smaller ¼ and 3/8 ounce models seem to be much more effective, especially if water depth and current allow you to see it on your electronics. The custom rattle draws fish in when jigged aggressively, but don’t be afraid to slow down at times and simply fish it without any movement at all. Tip the hook with a minnow head when fish are size sensitive, or three full minnows if you’re having trouble drawing fish in. Aside from the enticing action caused by the thin, flat sides, it’s available in dozens of eye-catching glow, UV and plated finishes.

Tungsten has changed the way ice angler’s fish for panfish. It’s denser than lead, so you can use small lures when fish are finicky and have enough weight to quickly get back down into a school of biting fish. That’s one reason I like the Clam XL and XXL. These jigs hang on the line at a 45-degree angle, and have hooks that are much larger than anything else in the same class. This allows you to use larger live bait or plastics and still have enough hook gap to get a solid hookup. This lure is widely popular among panfish and perch anglers, but it’s a sleeper for even the pickiest hard-water walleyes. It’s available in numerous sizes, shapes and finishes to match almost any scenario you come across.

Named because its silhouette resembles a leech, the original leech spoon was released a few years ago and has been so successful that Clam developed the larger “super” series and smaller “panfish” models. The original is still one of the best walleye ice fishing lures. The leech shape, zinc body and feathered treble hook creates an action that seems to drive perch and walleyes nuts. When fish are aggressive, the feathered treble often allows you to fish it baitless and it’s just as effective as it is with bait. The leech spoon sinks like a stone and is available in 12 finishes that are either plated or glow.

The Reef Runner Cicada is a unique lure with a curved design and a willow-bladed body. It’s available in sizes up to ¾ ounce, but the smaller 1/8 and ¼ ounce versions seem to consistently be the best performers for hard-water perch and walleye, and the 1/16-ounce size is so small that it only features one hook. You can tip the lure with everything from maggots to shiners, but don’t overload it because it can drastically change the action. Like most Reef Runner products, Cicadas are available in a wide range of finishes like Green Glow and Antifreeze, and also come plated with prism tape.

This jig is a compact flutter spoon that has an exaggerated kicking action when dropped in the water column on a slack line. The movement is so hyperbolic that it actually jumps at a 45-degree angle without too much coercing. However, like with so many flutter spoons, the biggest mistake is overloading it with too much bait, which effectively kills the action. A small minnow head or a few small maggots are still enough to draw perch and walleye in and not impair the flutter action. Personally, I have had better results with the smaller 1/16 and 1/8 ounce sizes, but when you’re fishing in a current, or fishing especially deep, the 5/16-ounce model produces better. It features the same footprint as the 1/8-ounce, but the body is much thicker, so you can fish it more aggressively and tip it with larger bait.

The Kastmaster is a long-time producer for me that would also likely be included in an ice-fishing lure “classics” list. It’s been so successful that in recent years Kastmaster has created new models with lifelike finishes, and even designed a rattle system if you want to add sound. While these new models have been productive, the go-to classic lures, with their simple paint schemes and prism-taped finishes, work better. Sizes from 1/12 to 3/8 ounce have worked the best when fished like a spoon, but don’t be afraid to also use it as an attractor by removing the treble hook and adding a chain hook. Then you’ll be able to use the spoon’s weight to get deep, and the motion and flash as an attractor. Shy perch or walleyes can hit the baited chain hook without feeling the weight of the lure just long enough for you to set the hook.

The Z Viber is a newcomer EuroTackle taunts as a hybrid lipless crank and blade bait. Large sizes of this lure closely resemble traditional hard-water lipless cranks, but the smallest 1/16-ounce differs from the larger offerings and has gained popularity because of its unique single hook design, which makes it perfect for fishing without bait. Tip it with a small plastic bait like a Maki Spiiki to give your presentation the slightest action, even when the lure is sitting still, all without hurting the lure’s effectiveness. This can be an important adjustment when fish aren’t attracted to the aggressive action of a lipless crank and less movement seems to draw more strikes.

When you begin a rundown of the best walleye baits and perch lures with a classic, it’s only fitting that you close with one as well. If I had a penny for every fish the Swedish Pimple has caught through the ice, I wouldn’t need to work. The design of the bait hasn’t changed over time, though it’s now offered in dozens of fancy painted colors and prism-tape finishes. While sizes #3 and #4 seem to be the workhorse for both perch and walleye, don’t be afraid to remove the treble hook and use a dropper chain like you would with a Kastmaster.