The World’s Tallest Dog and Other Musings

In case you missed it, Giant George, the world’s tallest dog as declared by the Guinness Book of World Records... 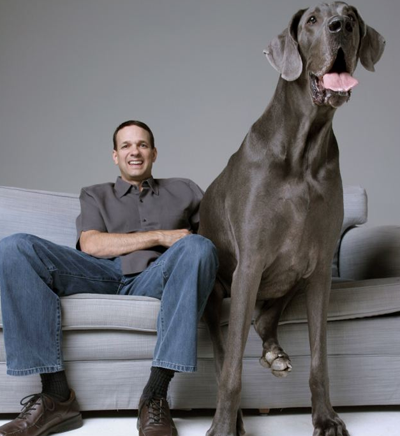 In case you missed it, Giant George, the world’s tallest dog as declared by the Guinness Book of World Records in 2010, has a new book out. The Great Dane’s owners wrote a book about life with the oversized dog, who weighs more than 250 pounds, stands about 4 feet tall at the shoulder and is around 7 feet long from head to tail. You’ve got to see the video and pictures of the pooch to truly get an idea of his size.

While Great Danes are now companion pets, they were originally used as big-game hunting dogs.

One of the ancient breeds, according to the AKC, Great Danes have appeared in writings since 1121 B.C. in China and perhaps even as far back as 3000 B.C. in drawings on Egyptian monuments. The modern iteration of the dog was developed in Germany by crossing, presumably, Irish wolfhounds with English mastiffs. The Germans used these big, powerful animals to hunt wild boars, which we all know are tough SOBs.

As the need for the hunting aspect of the dog dwindled, they became companion animals and many were used as guard dogs on large estates. While they are now primarily “just pets,” their massive size would give any intruder pause.

Though George is quite the specimen and is entitled to his throne as the world’s tallest/largest/humungous dog, Great Danes as a breed, however, usually defer to the Irish wolfhound when it comes to consistent tall height measurements.

Generally recognized as the tallest dog breed, wolfhounds have a long and storied history. Given as gifts to royalty, wolfhounds were fierce hunters, guardians and warriors, but also gentle beasts that were often brought into the master’s home at night. This breed’s dual personality — that of hunter of wolves and stag/Roman-warrior fighting companion juxtaposed with family dog and dignitary — is striking and a testament to the breed.

Alexander Pope, the 18th-century English poet, kept a good many Irish wolfhounds in his house that slept at his feet as he composed verse. He wrote several lines about dogs, the following summing up the differences between dogs and people perfectly:
_
“If it be the chief point of friendship to comply with a friend’s notions and inclinations, he possesses this to an eminent degree; he lies down when I sit and walks when I walk, which is more than many good friends can pretend to do.”_