How to Get Started Hunting Squirrels With a Dog

Hunt squirrels with a good cur or fiest, and you will never go back to walking the woods alone 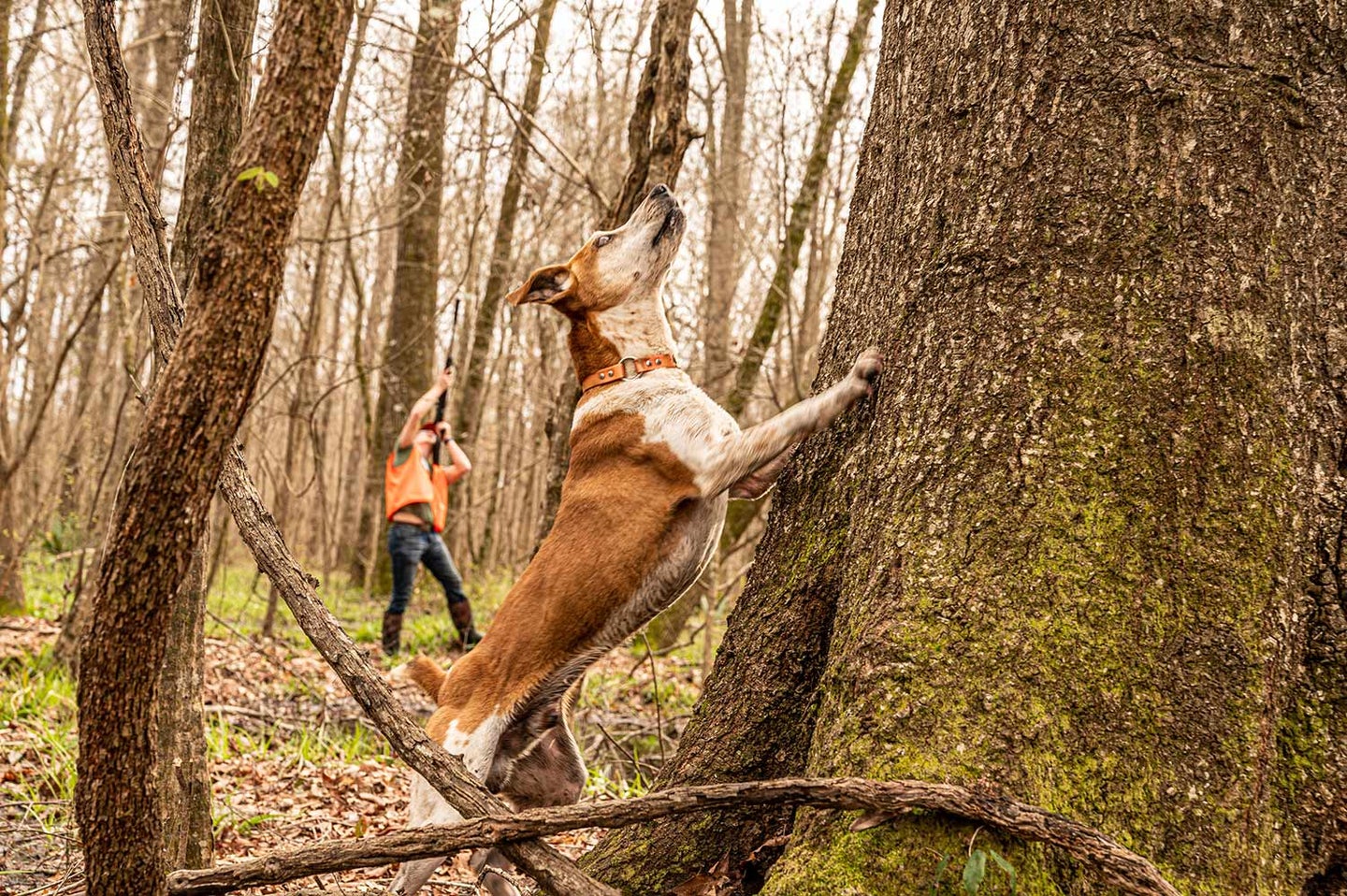 Squirrel hunting is a great way to get new hunters into the sport. Larry Case
SHARE

The frantic barking of the dogs drew us deeper into the hollow. Chris and I agreed to take this hunt easy and not go too fast. But, after hearing the intensity of the two squirrel dogs barking, that went out the window. It sounded like they were saying “Where are you guys?” “Get here quick!” “We have one treed!” I glanced over at Chris breaking brush; he was even more intent on getting to the dogs than me. The bellows from our dogs drew us onward, heedless of the rocks, brambles, and steep incline of the hill we pressed on.

You don’t need a dog to squirrel hunt, of course, but like many hunting pursuits, having one at your side makes it more enjoyable (and easier). A well-trained dog will also sniff out more squirrels than you can ever find on your own. The breeds are also relatively inexpensive when compared with bird dogs. You can typically find a good mountain cur or fiest pup for a few hundred dollars.

Also, hunting squirrels with a dog is one of the best ways to introduce a new hunter, young or old, to the sport. Squirrel doggin’ is a low stress endeavor and can be done most anywhere. Kids and adults can have a carefree day in the woods, watch the dogs work, and get plenty of shooting opportunities (hopefully). Kids don’t have to be quiet, sit still, or any of the other tortuous aspects of deer or turkey hunting. Plus, it’s fun.

Once you hunt squirrels behind a good dog, there’s no going back to walking the woods alone. Here’s how to get started.

Like any hunting dog, a squirrel dog’s main job is to find quarry for you. Basically the hunter takes a walk in the woods and follows the dog as he runs ahead and sweeps the area to locate squirrels. Different dogs do this in different ways. Some dogs are powerhouses and run full blast until they hit the scent of a squirrel. Some are more careful and check the area as they pass through, using their eyes and ears as well as their nose. When the dog hits the track of a squirrel on the forest floor he will usually trail it to a tree. After a little checking to make sure this is the tree the squirrel is in, the dog will settle on it and bark to alert the hunter that he has found the game.

Some people think that this is easy since they see their poodle or Scottish terrier chase squirrels in the park every day. It’s true, almost any dog will sight chase squirrels, but think about the squirrels you have watched on a lazy afternoon from your deer stand. A squirrel runs or hops along the ground, runs the length of a fallen log, bounces three feet up on the side of tree, jumps down again and scrambles off in another direction. The squirrel dog may come along 15 minutes to an hour later and must unravel this mystery. The experienced dog will carefully follow the maze, determine what tree the squirrel finally climbed, and stayed in, then start to bark “treed.” The good dog stays at that tree and will not be distracted away from it until his hunter gets there or the world ends, whichever comes first.

When the hunter or hunters arrive at the tree, the task starts of finding the squirrel in the treetop. Large towering oaks will have dozens of places for a squirrel to hide and it may take several minutes of intense looking to find the squirrel (good binoculars really help). Often an ear or tuft of hair is all you will see at first, it takes a lot of experience to become a good squirrel spotter. If more than one hunter is present, the best method is to surround the tree and get as many eyes on it as you can. Often, the squirrel will move around a limb if one of the hunters moves on the ground, and he will be seen by another hunter. When the squirrel is spotted, and the shot is taken most squirrel dogs grab the squirrel on the ground (that is their reward). Many hunters allow the dog a quick taste and then the dog must release the squirrel (no running off with the squirrel or playing tug of war). Then the dog is told “OK, go find another one.”

Many unpredictable things can happen while the dog is treeing. The squirrel may bolt from the top of the tree and jump limb to limb in the treetops. This is known as “timbering” and a good squirrel dog will follow the squirrel and watch wherever it goes. Eventually the squirrel will stop, and the dog will then begin to tree bark again. Often, the squirrel will find a hole in the den of a tree. The dog will continue to tree bark until the hunter arrives to pull him away from the tree. Experienced hunters will train their dogs with a command for this such as “In a hole, can’t get him!” The dog should then leave the tree and start looking for another squirrel.

Which Breed: Cur or Fiest?

If you decide to take the plunge and join the world of squirrel doggin’ your first question may be what breed of dog do I look for? There is no doubt that dogs from many different breeds have made good squirrel dogs, but for the most part, and to help you get started properly, you will want to look at the two most popular breeds for squirrel dogs, the cur and the fiest.

The term “cur” should not be mistaken here as a derogatory name for a dog. Cur dogs have been bred for hunting since colonial times in America. The modern cur, known as the mountain cur, was refined starting sometime in the 1940s and has developed into the cur dog that we have today. Curs in general, are larger than fiests and will usually range out farther in search of game. Good curs will use their eyes, ears, and nose in search of squirrels and are known for having more “nose” than most fiest dogs. Some fiest fans will disagree strongly with this. There is a lot of good-natured rivalry among some squirrel dog aficionados, just like Ford vs. Chevy.

Curs are often known to be highly intelligent, loyal, and may even be more sensitive than other dogs. A cur may take a little time, but once he bonds with you, that is it, he is your dog. All dogs are individuals and even dogs in the same litter will vary in traits, but if you think you may not want a squirrel dog to range out too far in the woods, the fiest is a better fit for you. The Original mountain cur, the Kemmer cur, Stephens cur, and treeing Tennessee brindle are all different strains of the cur dog.

Fiests are usually smaller than curs and may be a little more “feisty,” which is probably a result of some of their terrier ancestry. Like the curs, fiests make great “buddy” dogs and if you are able, take them with you everywhere you can, especially when they are young. This is a great way to bond with any dog and will translate to your working together in the woods and making them a squirrel dog. The Mullens fiest, Barger fiest, mountain fiest, and American treeing fiest are all good squirrel dog breeds.

Most fiests and curs make great family dogs, are good with kids, and will be a loyal companion as long as they live.

Read Next: Hunting With Dogs is the Best Way to Bag Late-Winter Squirrels

There are other breed options as well. The Norwegian elk hound often makes a good squirrel dog, and in recent years more people are using hound breeds such as blueticks, redticks, black and tans, and Walkers. A dog that you don’t hear much about is the West Siberian laika, a breed from Russia that is known for being a natural hunter and may begin treeing game at an early age. It is also common to crossbreed a cur or other squirrel dog with a bird dog, usually a pointer, and I have seen some great squirrel dogs come from these crosses.

If you are not familiar with the squirrel dog world and don’t know anyone with dogs, the best route is to do your homework and look up a reliable breeder, like world-champion Alex Franklin, and have some conversations with them before jumping in and getting a puppy. If possible, go see the parents work in the woods. This is the best way to predict what the puppies might do.

You Own a Squirrel Dog, Now What?

Ronnie Snedegar is a squirrel dog addict from Greenbrier County, West Virginia, and spends a lot of time with his dogs. His Annie is a West Siberian laika and a Super Grand Squirrel Champion (events are held all over the country). He also owns Rowdy and Hammer, a father and son treeing Tennessee brindle team, and they have both earned Squirrel Champion titles as well.

“I have raised all three of my dogs from 8-week-old puppies, and the journey starts the day you go to pick up your pup.” Ronnie said. “In my opinion the bonding (which is a big part of my training) starts the very first minute that you claim the pup as yours. There are lots of different ideas on picking a pup, as for myself I look for the loner and most adventurous, which is often the same pup with both characteristics.

“Once I have gained the trust of the pup (usually just a day or two), I take it with me everywhere that I can. In the woods, around the yard, the feed store, outdoor family gathering and such. I spend quite a bit of time praising the pup for doing things I like, coming when I call, taking care of business when I take it outside, etc.”

Snedegar says that outdoor time with a pup is spent around creeks, fences, steep banks, and any obstacles they will encounter while hunting. In order to introduce the pup to squirrels, watch for fresh road kills or keep a stash of tails and hides in the freezer and let the pup smell them and grab them if they want. Remember, all dogs are different, some puppies may show a lot of interest in a hide or dead squirrel, some may not. What you do not want to do is push a young dog too hard at first. They are all different and progress differently, let them learn at their own pace.

Successful trainers will tell you that you must wear out some boots to make a squirrel dog. There are no tricks or gimmicks that will take the place of being in the woods with your dog. Start with a well-bred pup that seems to have a strong prey drive and a natural instinct to tree and take them to the woods. Taking the young dog to an area that has squirrels to begin with can be important. Too many trips to the woods without contact with game will discourage you and your dog. Every time you go to the woods you may see a slight difference and improvement. It will not happen overnight; patience and perseverance will be rewarded.