TOP SHOT: How to Not Make Mental Mistakes

_Editor’s Note: Tim Trefren is a hunting guide from Wyoming and a competitor on Top Shot, the History Channel’s reality... 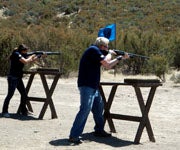 _Editor’s Note: Tim Trefren is a hunting guide from Wyoming and a competitor on Top Shot, the History Channel’s reality tv show about marksmanship. Each week Tim will blog about the most recent episode offering insight and shooting tips.
_
So last night “Top Shot” featured the shotgun challenge, with the Benelli M4 and the Benelli Vinci.

Since there’s not much I can tell you about shotguns that you don’t already know, I am going to try and pass along some tips about not making mental mistakes.

When we figured out it was a shotgun challenge I was like “HELL YA now we’re playing my game. Clay targets and steel plates, how much better can it get?”   Well, mental mistake number 1 was overconfidence. I breezed through the practice round and the rest of the Red Team did great as well. But then came challenge time, and Colby (Top Shot host) explained that we were going to be shooting at the same time with a partner. The first shooter had to hit a steel target in order to release the clay target for his partner.

I was up first on the Vinci, remember mistake one, so I stepped up and called pull. My partner hit the steel target immediately and two of the fastest birds I have ever seen flew out. HOLY CRAP those were fast.

Never take anything for granted, just because you practice one way does not mean that’s how it’s going to pan out when it comes to crunch time.

I still had two more shells in the gun but it was too late to do a damn thing about it (And yes the cuss word was about that long). I have shot a lot of sporting clays and trap over the years and in those two disciplines you get two shots, but that wasn’t the case in this challenge. I let my past experiences and old habits keep me from emptying the gun and busting that second bird.

Through 19 years of guiding I have learned that every hunting experience is different. If I was not able to adapt and learn from past mistakes, not only would I be a very hungry hunter, I would be a very lonely guide.

So, luckily I was able to learn from my mistakes in this challenge and help my team go on to win. We won mostly because of our ability to communicate effectively with each other (see last week’s blog).

But what helps keep you from making mental mistakes? Well, it’s different for everyone. Some people like to stay relaxed by playing cards, or taking naps. Others thrive on the pressure and want their mind on the task at hand. Every shooter has to figure out what works the best for him. I think about my family. I think about how thankful I am to have them or mundane stuff like what they are having for dinner. My family is my Zen place.

So next time you’re met with a shooting challenge, go find your own Zen and kick some ass.

Thanks for reading and tune in to the Top Shot on the History Channel next week Tuesday at 10/9C.