Altering your forcing cone can improve your patterns and performance 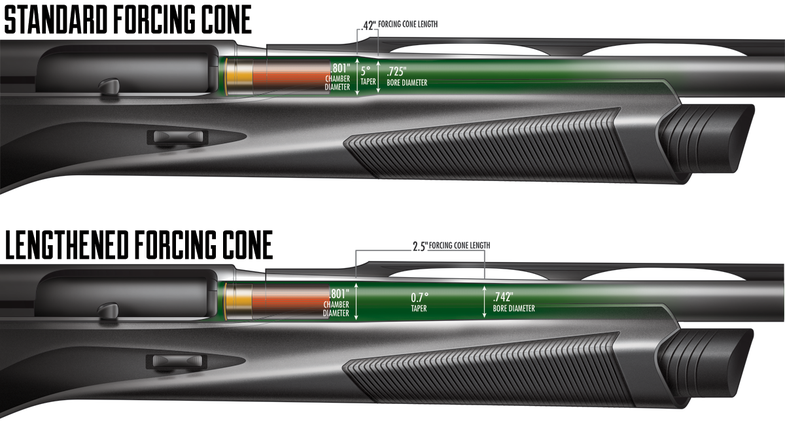 One of my favorite shotguns is my Benelli Super Vinci. It’s lightweight, points naturally, and is tough as nails. However, I became a bit disenchanted with it following a few less-than-satisfactory hits on geese.

While well within 12-gauge specs, Benelli bores tend to run a little on the smallish side and I reasoned that it might benefit from having the forcing cone lengthened and polished.

For those not fully familiar with shotgun anatomy, the forcing cone is the area inside the bore, just ahead of the chamber, where the larger chamber tapers down to meet the smaller bore. In many shotguns, this cone length is very short—less than an inch. Lengthening the forcing cone by 2 or 3 inches with a chamber reamer, followed by polishing, creates a longer, more gradual taper for the shot charge to transition into the smaller main bore. The hoped-for result is less pellet deformation, fewer flyers, and more uniform patterns downrange.

“The main purpose of lengthening the forcing cone is to bring any distorted stray pellets back into the pattern to make it denser,” says Rob Roberts, whose gunsmithing company does the work on Benelli’s Performance Shop hunting guns. “It will also reduce felt recoil, as it opens up the gate, as it were, and takes back pressure away from the shoulder and pushes it out the muzzle”

While Benelli shotguns are good candidates for forcing-cone lengthening, other shotguns can also benefit from the procedure. Browning’s Maxus and A5 both have factory-lengthened Vector Pro forcing cones and overbored barrels that I’ve found consistently produce stellar patterns. Still, Roberts says, “We’ve found that the smaller the bore, the better the results from longer forcing cones.”

Measurable Results
While I noticed less recoil and better results on birds and clays with my gun, I had Roberts gather some hard before-and-after data on an Super Black Eagle II he worked on (see chart below).

In terms of performance gains and affordability, forcing cone lengthening is a great value among shotgun modifications, often costing less than $100 per barrel—in some cases much less. Just be sure to have a reputable gunsmith perform the task.

All shots taken at 40 yards using a Benelli SBE II both before and after having forcing cone lengthened. Chokes used were Rob Roberts’ T2 light modified and Final Strut turkey tubes.

All shots taken at 40 yards using a Benelli SBE II both before and after having forcing cone lengthened. Chokes used were Rob Roberts’ T2 light modified and Final Strut turkey tubes.