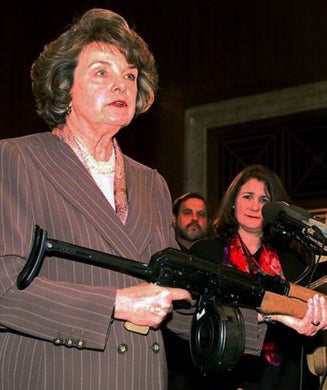 People often say dumb things in the heated passion of political debate. And in the new era of gun control regulations, inflaming emotions rather than engaging in a rational discussion has become all too common.

What follows is a list of 9 dumb quotes from gun-control proponents about the Second Amendment, gun violence, and guns that confirms, once again, that thinking before emoting is easier said than done.

2) “What bothers me most about today is that we’re getting used 2 it. ENOUGH. 2nd amendment must go. Violence has 2 stop. Culture MUST change.”

3) “Congressman Giffords’ life was saved and so many others’ when very valiant folks stood up to defend themselves and protect themselves, and they did it with ballpoint pens.”

4) “Well, you know, my shotgun will do better for you than your AR-15, because you want to keep someone away from your house, just fire the shotgun through the door.”

6) “We have federal regulations and state laws that prohibit hunting ducks with more than three rounds. And yet it’s legal to hunt humans with 15-round, 30-round, even 150-round magazines.”

7) “If you ban them in the future, the number of these high-capacity magazines is going to decrease dramatically over time because the bullets will have been shot and there won’t be any more available.”

8) “It’s the kind of turn that happened to the great country of Germany, when Nazis came over and created tragic things, and they had to be told off. And if we continue this kind of violence and accept it in our country, the rest of the world’s going to really take care of us, in a very bad way.”

9) “If there was special interests affecting police work, I believe that would be called corruption. So, if it has do with donating money versus a popular vote, I think we have a bigger problem in this country and somebody’s gotta wake up to that.”