Action Pistol matches continue to be the most popular recreational use of handguns, and gunmakers are not shy about providing... 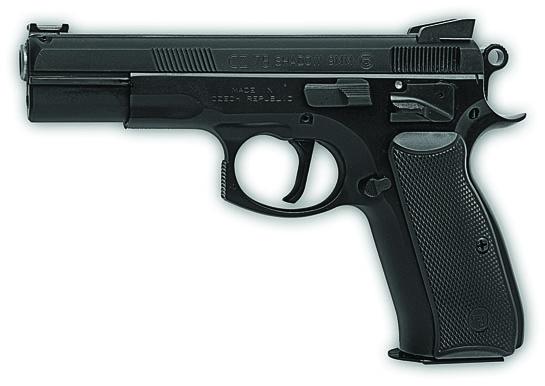 Action Pistol matches continue to be the most popular recreational use of handguns, and gunmakers are not shy about providing competition-ready models. Among the new additions for this year are pistols in various calibers and configurations, ranging from .22 rimfires to .40 S&W.

The 9mm CZ 75 Shadow has earned high marks from competitive shooters in its original DA/SA operating action for its ergonomic handling qualities and accuracy. This year it will be offered in an SAO (Single Action Only) version that will appeal to those shooting IDPA, USPSA, and Steel Challenge who prefer a crisp single-action trigger.

The 9mm CZ 75 Shadow SAO retains all of the features of the original Shadow but is fitted with a redesigned trigger group, originally introduced on the CZ 75 Champion, that produces a crisp 3.5-pound single-action trigger pull weight. A CZ Combat-style slide, without a firing pin block, improves trigger reset distance. Extended ambidextrous thumb safeties make it southpaw-friendly, and the fixed sights feature a fiber-optic front. Three 16-round magazines are included. ($979; cz-usa.com)

Smith & Wesson’s new M&P C.O.R.E. series, which stands for Competition Optics Ready Equipment, features a specialized mounting platform on the slide that can be quickly changed to allow the use of popular competition red-dot optics without the need to remove the stock iron sights.

Available in 9mm and .40 S&W, and in barrel lengths of 4.25 or 5 inches, the series offers all the standard M&P features, with the addition of interchangeable backstraps with more pronounced stippling. This versatile platform is ideal for the shooter who wants one gun to do it all. ($729; smith-wesson.com)

The new Ruger 22/45 Lite is ideally suited for rimfire action shooting competitions, which are increasing in popularity. The Steel Challenge has adopted a rimfire division, and more than a few clubs are now hosting various rimfire action matches. With its polymer frame, it weighs just 23 ounces and moves quickly. A fully adjustable rear sight and pronounced blade front sight allow it to realize all the accuracy the 4.4-inch barrel delivers. The grip angle, magazine release, and controls mimic the 1911. It’ll run like a 1911 and kick like a .22–and won’t bust your ammo budget. ($449; ruger.com)