I recently did an experiment for a friend to show the importance of trigger control. I shot three consecutive 5-shot... 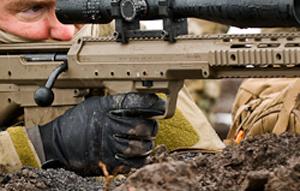 I recently did an experiment for a friend to show the importance of trigger control. I shot three consecutive 5-shot groups at 100 yards with a Shilen Tactical .308 using Federal 175-grain Gold Match ammo.

I placed myself in the same position each time, shooting prone off a bipod and while using a squeeze bag under the rear of the stock. I took the same sight picture for all 15 shots.

For the first series of five, I took a hard grip on the rifle and was “thoughtless” with respect to my trigger. I just squeezed off each shot when the reticle and my breathing were in the right place.

For the second group, I took the same solid grip on the rifle, but focused on my trigger movement to impart the correct pressure straight toward the rear of the rifle.

Lastly, I loosened up my grip hand and used the same deliberate trigger pull as I did with the second group.

The results on the target told the tale. My first group was good in the vertical, but the shots strung out horizontally to just over an inch. The second group was nice and round but you could clearly make out all five shots. That group was .8 inches. The final group formed a lovely ragged hole that would have been a screamer had I not pulled one of the shots. Even so, it was just over .5 inches.

Minute variations in trigger finger technique have major implications downrange, which can be hard to believe given the violence that goes on when a cartridge is fired and pushes the bullet down the barrel. But it’s true.

Doing this can feel incredibly awkward at first. To get your finger in the right position you might find your knuckle brushing up against the bolt of your rifle, which you want to avoid at all costs. And, in all likelihood, your trigger finger probably doesn’t either start or finish in a 90-degree relation to the trigger on your favorite deer gun right now.

But practice this fundamental skill of building a good position with your trigger hand and learn to manipulate the trigger in the right way and your groups will get tighter.