Taran Butler is one of the more interesting pro shooters on the scene today. He’s sort of a combination of... 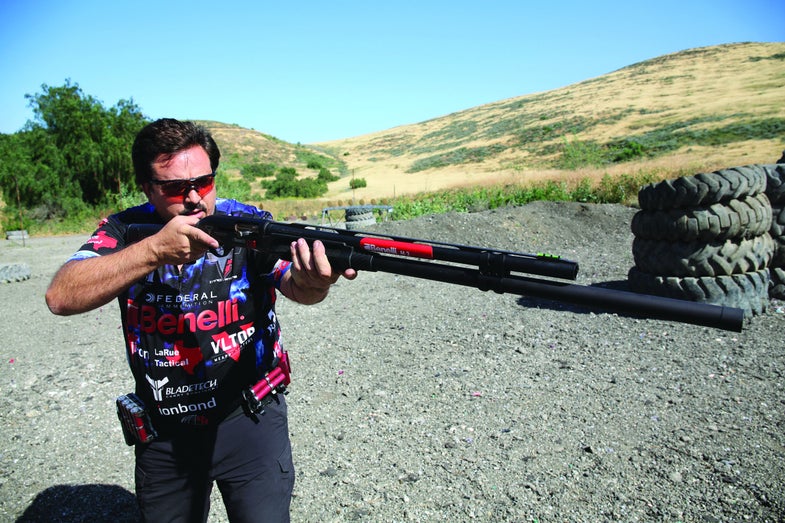 Taran Butler is one of the more interesting pro shooters on the scene today. He’s sort of a combination of Doc Holliday and Elvis. He’s fast on the draw and has an unmistakable flair on the firing line. But more than just a pro shooter, Butler heads up his own accessories company, Taran Tactical Innovations. Butler uses the products he designs in competition, so he—and his customers—know they work. We caught up with Butler recently to talk about his training tips and his life as Hollywood’s top 3-Gun shooter.

Outdoor Life: You’ve won multiple national shooting competitions, but tell us about your first 3-Gun match.
Taran Butler: I had been competing in pistol for years, and in the late ’90s a friend said I had to try 3-Gun. I was like, Oh god, what is that? I’m going to show up with a wheelbarrow full of guns and there’s going to be pig farmers all over the place with suspenders on. It just seemed lame. But I tried it and it was awesome. Then I thought, Wow, I’m a jerk.
I borrowed a shotgun and it jammed on every round. I couldn’t load it, it was tearing my fingers apart, and I did terribly. I finished dead last in both shotgun stages. So I got to the pistol stages and I was so livid that I shredded through them like a maniac. Then I got to the rifle stages and the guys were telling me to kneel here and get prone there. I was like: “I’m going to just shred this mess like it’s a giant open gun.” The best time was 35 seconds and I shot it in something like 16 seconds. I won both pistol stages and both rifle stages. And even though I was last in the shotgun stages, I won the overall match. I was immediately hooked.

OL: Since that first match, have you figured out a better shotgun-loading technique?
TB: Yeah. First I cut my six shell caddies down to four, because the shotguns would only hold eight in the magazine. At the time, there was no quad loading or anything like that, and guys would go 100 miles per hour and miss targets. They would rack out three shells at the end of the stage, or they’d run the gun dry and have to load one at the end. I thought, I’m going to shoot exactly what the stage is and not miss.
Shotgun loading has, of course, evolved over time. Over the years, the weak-hand reload has won pretty much all the major 3-Gun matches. But this year the 3-Gun national will be won by a quad-loading technique. It’s just faster if you take the time to practice it and develop the dexterity.

OL: You made a name for yourself early on with the pistol. What pistol drills do you recommend?
TB: There are a million out there, but I like to have people switch gears quickly. So, set up some paper targets at 7 yards and shoot them as fast as you can on the move. Then suddenly switch gears to small plates, and then maybe to 15-yard partial targets. Then, go back again to hosing those close paper targets. I see guys get in a rhythm and it’s just bang, bang, bang. But in a match, you have to switch gears from running wide open to sudden, hard shots.

You have to be disciplined to do this. You have to switch your vision from barely seeing your sights on the close, easy targets to getting a nice, clear sight picture on the tougher targets.
Also, in general, work on what you hate. Pick out the aspect of a match that you’ve struggled with the most and practice it until you feel comfortable. Really try to analyze your performance. It isn’t about the quantity of shooting you do—it’s about the quality of each run.

OL: YouTube is overrun with guys making videos on how to shoot and reload faster and better. What’s your take on that?
TB: There are so many YouTube gods who do these spectacular runs in their basement or garage, but we know there were 25 takes that never made the video. I think it’s more useful to watch top competitors shooting stages to see how they break it down, drop their guns in the barrels, transition, and things like that. Anything on YouTube with good shooters. Watch them and copy what they do, but also pick the technique that is the most natural for you. Or combine styles from a bunch of different guys to find out what you like.

OL: What other advice do you have for 3-Gun competitors trying to up their game?
TB: Try to go faster. A lot of people just stay in this zone of third gear. Sometimes you should just shoot as fast as you can and see what you can get away with. You’ll shoot the stage and be, like, three seconds faster and say, “Whoa, I didn’t know that I could do that.” Well, that’s because you’ve never tried it. If you get going too fast and you’re missing everywhere, then back it off a little. You’ll still be shooting faster than when you were just being conservative and boring.

OL: Your company, Taran Tactical Innovations, modifies guns for competition. What are some changes you recommend for a new 3-Gun shooter?
TB: First, with a pistol like a Glock you don’t need a big budget. With some minor things done to it—you need a bitchin’ magwell, a grip job, a trigger—you’re pretty much good to go. For shotguns, the Benelli is unbeatable. [Editor’s note: Both Glock and Benelli sponsor Taran.] You’ll need a mag tube extension, the loading port opened up—you won’t be able to quad-load without that—and the gun needs to hit point of aim. Out of the box, most shotguns do not hit point of aim with slugs. So, you’ll probably need to get the barrel corrected. Kentucky windage is no fun during a competition. With the rifle, there are a lot of good AR makers out there. You want a fast, light, accurate gun that’s soft shooting. And the trigger is the heart of the gun.

OL: How did you end up as an instructor and adviser for Hollywood?
TB: A friend of mine invited director James Cameron to my shooting gallery in Simi Valley, California, just outside of Los Angeles, and I was really excited because I’m a huge movie buff. So he came out to shoot and I started changing his grip and his stance—he had this brutal Weaver stance—and finally Cameron was like, “Stop! Before I change all of this, I have to see you shoot.”

So I had eight targets in front of me and I shot them as fast as I could, and it was raging. Really, it was like God shot for me. I holstered the gun super fast like I was Shane, and Cameron just went crazy. So he came back for lessons every week from 1997 to 2004, when he got too busy with Avatar.

Eventually, I became friends with some of the top firearms instructors in Hollywood. Most are retired Special Forces of some sort, and they would bring different actors out to my property.

OL: You worked on Public Enemies, which was acclaimed for having realistic firearms scenes. But, what’s some of the worst gun handling you’ve seen in a movie or on TV?
TB: You see really bad stances all the time. But the number-one right now is Rick from Walking Dead. He’s always running around with a Python aiming at zombies’ feet and somehow the bullets are hitting them in the head. He’s got this limp stance and it’s really annoying. That’s evidence of the actor not being properly trained.

For more, check out Range365: Shooting Off at the Mouth: Chad Adams