The shooting events in the Olympics Games will kick off in London on Saturday July 28. With nearly 400 athletes... 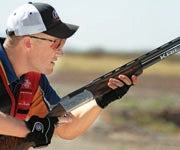 The shooting events in the Olympics Games will kick off in London on Saturday July 28. With nearly 400 athletes competing across 15 events, here’s a look at some of the shooting sports and the guns our Olympians will be using to bring home the gold.

Numbers to Know
270,000 – Number of clay targets expected to be thrown during both trap and skeet events during the 2012 Olympics.

15 – Number of shooting events scheduled for the 2012 Olympics in London, including rifle, pistol, and shotgun disciplines. Shooting sports–up to 21 events in some years–have been a part of the Olympics since the beginning of the modern games in 1896.

1.06 oz. – The lightest known trigger pull on guns used during the Free Pistol competitions, which set no restrictions on trigger weights.

60 mph – Speed at which a clay target exits a trap during the International Skeet events. Clays thrown during the Men’s and Women’s Trap events leave the house at a blistering 72 mph.

1984 – The first year women’s shooting events were added to the Olympics. Prior to that, women competed alongside men.

180 – Muzzle velocity in meters per second of a typical .177-caliber Olympic air rifle, which converts to about 590 fps. Compare that to most air rifles on the market today, which boast speeds of 1,200 fps or more.
**
Classic Olympic Shooting Events**

International Trap
This isn’t your standard summer trap league. International, or Olympic, Trap utilizes 15 separate throwers placed in a trench–three in front of each of five shooting stations. At each station, the shooter is presented with one straightaway target and two each to the left and right, thrown in randomized order but at fixed angles, unlike American Trap.

Rapid Fire Pistol
One of two current shooting events that debuted at the first modern Olympic Games in 1896, Rapid Fire Pistol is just what it sounds like. Competitors shoot five shots unsupported and one-handed in quick succession at targets placed 25 meters downrange. Over the course of three stages, scored bull’s-eye targets are presented for 8, 6, and 4 seconds.

Running Deer
From 1908 to 1948, Olympic shooters competed in this hunting-inspired event that sounds more like a carnival game or perhaps a precursor to today’s popular Big Buck Hunter video games. Shooters fired at moving deer silhouettes placed from 100 meters away, scoring points only by hitting within one of three concentric circles placed in the deer’s vitals.

Among the rifles used in the Olympics, Anschutz dominates, though firearms from Feinwerkbau and Walther have also made appearances on the medal stand. Preferred brands packed by pistol shooters include Steyr, Morini, and Pardini.

Leathers
Olympic rifle shooters wear stiff leather and canvas clothing that provides a stable support when firing off-hand. The heavy suit also deadens the effects of the shooter’s pulse on the accuracy of the shot. Leathers are held to strict standards that limit both stiffness and thickness of the material. Rules even govern the number and placement of belt loops on a shooter’s pants.