I have been told that I shatter a lot of stereotypes in the firearms world. But from time to time,... 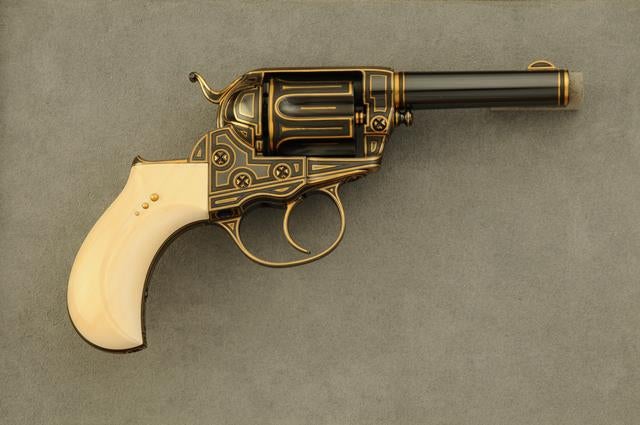 I have been told that I shatter a lot of stereotypes in the firearms world. But from time to time, I am quite a cliché: I like a pretty gun.

I can appreciate a beautiful firearm for its aesthetic value, even if function is sacrificed in the process. And the Cody Firearms Museum has such a unique collection of firearms, engraved and modified by an art collector and conservator named Raymond Wielgus.

Wielgus was an Asian and African art collector and a conservator out of Chicago, Illinois. In 1975, he and his wife, Laura, moved to Tucson, Arizona. One day he was out shooting his Colt Diamond Back Revolver and he decided to improve it stylistically. So during his 30 years of retirement, he embarked on a journey to reimagine firearms embellishment—when I retire, I doubt I’ll contribute as much to the human race.

The Colt Model 1877 “Thunderer” was a double action revolver produced between 1877 and 1909. Standard calibers were .38, which was called the “Lightning” and .41, which was called the “Thunderer.” The Model 1877 was the first production of a Colt double action revolver. Wielgus used several historically significant guns like this as subjects for damascene decoration, which is an ancient process (it originated in Damascus, Syria) of inlaying gold and other precious metals into metal objects. He also hand carved the ivory grips.

His firearms traveled the country to art museums, and were often referred to as “art deco” pieces. Because he was not a firearms engraver, he made the firearms inoperable in order to conduct some of the design. This is one of the most stunning firearms collections I’ve ever seen, and I only hope that someone is able to replicate the appearance of Wielgus’ guns and integrate it with a functioning firearm someday.