Guns of the Old West

These are some of the most iconic guns of the old West. Cody Firearms Museum
SHARE

There’s a multitude of cool and iconic guns of the old West. That makes picking just 10 of them is a real challenge. So each of the firearms in this list is not only a significant gun of the American West, but each belonged to some of the most famous and infamous frontiersmen (and women), soldiers, and icons who forged the frontier both in myth and reality—a West we nostalgically remember today. Spoiler alert: You won’t see all your favorite men, women, and guns on this list, but every artifact on this list can be seen at the Buffalo Bill Center of the West in Cody, WY.

William F. “Buffalo Bill” Cody owned this embellished serial number 3 Remington Rolling Block Rifle. Cody earned his nickname working for the Goddard Brothers on the Kansas Pacific Railroad. He then rose to fame through stage performances and ultimately the internationally renowned Buffalo Bill’s Wild West. The Remington Rolling Block was made in many calibers and configurations. The original concept was designed by Leonard Geiger in 1863 and improved upon by Remington’s Joseph Rider. Production of this action occurred from 1867 through 1934.

On July 17, 1876, after George Armstrong Custer’s demise at the Battle of Little Bighorn, the Battle of Warbonnet Creek occurred. The most notable component of this event was an encounter between Buffalo Bill and Cheyenne warrior Yellow Hair. During this interaction, Cody shot and killed Yellow Hair. This gun is believed to be the gun that Cody took from his victim. Remington became known for its Navy and Army Revolver models. The first revolver they made was a design by Fordyce Beals. Its introduction in 1857 is linked with the expiration of Colt’s revolving patent. 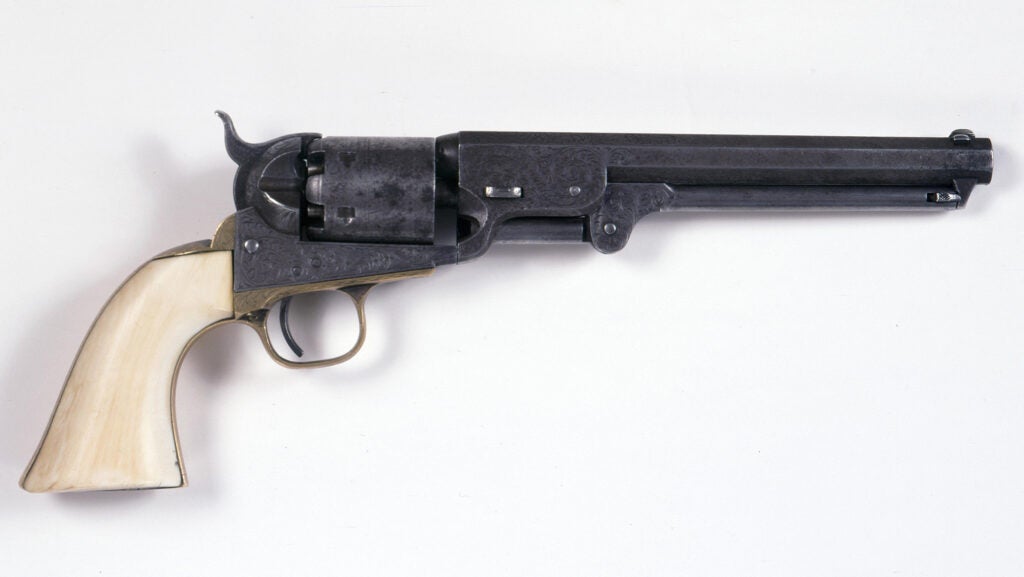 James Butler “Wild Bill” Hickok was known for many things – ranging from lawman to showman. But it is his death that, like the folk hero, has become legendary. Hickok died during a poker game in Deadwood, South Dakota. This Colt Model 1851 Navy Revolver belonged to Hickok and was sold to help pay for his burial expenses. I recognize the Colt Model 1873 “Peacemaker” is more famous than the 1851 Navy when it comes to guns of the old West lore. But the museum doesn’t have a famously associated Peacemaker, so I thought to honor Colt’s legacy for this list with Mr. Wild Bill.

Possibly best known for his greatest failure, the Battle of Little Bighorn in 1876, Custer held a mostly prestigious military career. He served as a Brevet General during the American Civil War. He was the Lieutenant Colonel of the U.S. 7th Cavalry Regiment when he died. While a military man, this Sharps reflects his civilian life. The Sharps Rifle is iconic on the frontier, known for its military uses but also for bison hunting. This model is earlier in Sharps history – pre-Civil War. And was the last model on which Christian Sharps worked before he left the company. 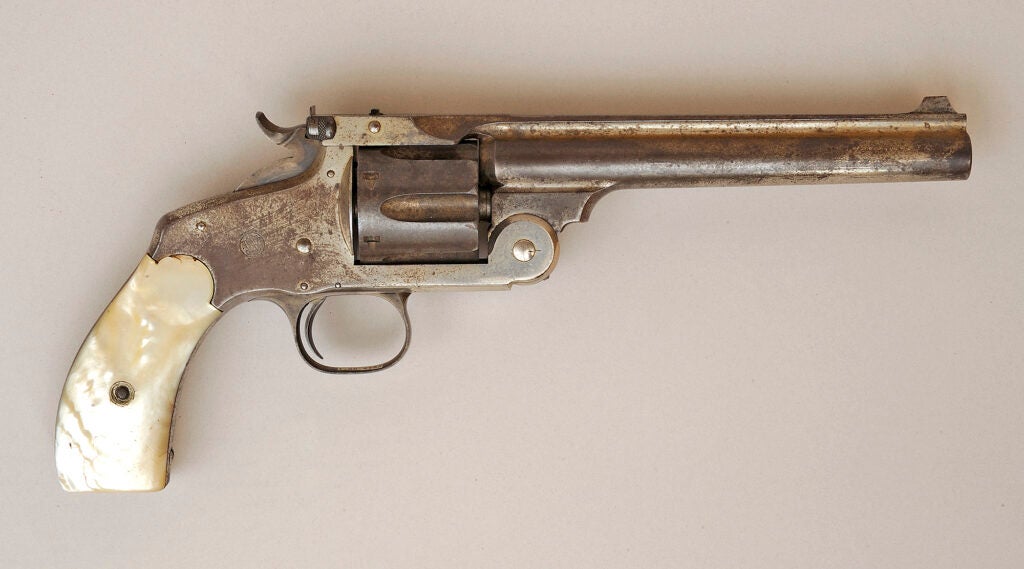 Annie Oakley was one of the most popular performers for Buffalo Bill’s Wild West. Oakley was born Phoebe Ann Moses in Darke County, OH and began hunting at an early age to support her family. At the age of 15, she entered a shooting match with famed marksman Frank E. Butler. Oakley won the match, ultimately married Butler, and went on to international fame for her marksmanship. This well-worn Smith & Wesson No. 3 Revolver belonged to Oakley. It is believed she ordered three No. 3’s during her lifetime. While Smith & Wesson initially were involved in the lever action side of iconic western guns, they quickly shifted to the top break revolvers that made them famous. Thanks once again to Colt’s pesky patent expiration in 1857.

Buffalo Bill has already made an appearance on this list – and he will again. This Winchester was used, by the showman, during his arena performances. Note that the rifle is designated smoothbore. The legend goes: during an arena performance, one of the performers shot through a greenhouse window and from that point on the crew would shoot shot rather than a bullet. The Winchester Model 1873 is the quintessential “Gun that Won the West” – thanks in no small part to clever marketing during the post-World War I era. But still, this model is one of the most frequently seen in western film, literature, and lore.

Liver-Eatin’ Johnson was known by many names and immortalized as Jeremiah Johnson thanks to the Robert Redford film. John Johnston (with a T) is known best by oral history and legend as the man who declared war on the Crow Nation after the murder of his Flathead Indian wife. However, that story has been refuted by evidence that places him as a soldier in the Mexican American War at the time the story came to be. Regardless, he is considered an icon in the West. And the Hawken Rifle is every bit as famous. The Hawken Bros, out of St. Louis, MO, made single shot muzzleloaders that became known as the mountain man’s firearm of choice.

William F. Cody earned the nickname Buffalo Bill with this rifle. He used this gun while bison hunting for the Kansas Pacific Railroad. He named it Lucretia Borgia after the femme fatale character from the stage play Lucrezia Borgia. Note that part of the firearm is missing. This happened during Buffalo Bill’s lifetime. Trapdoor technology was a popular breechloading modification used in the West. The Model 1866 was the second conversion of Erskine Allin. While many attribute the Sharps Rifle as THE bison gun, it is interesting that Buffalo Bill earned the Buffalo before Bill with not a Sharps, but this Springfield.

Artist, sculptor, and avid sportsman Frederic (not to be confused with Eliphalet) Remington owned many firearms. In fact, the Buffalo Bill Center of the West owns his Studio Collection. Within this collection are a series of guns that he purchased and displayed in his art studio. Many western artists who depicted guns of the old West in their art would use his guns as props. But Remington also liked to hunt with them as well. Spencer repeating firearms were developed by Christopher Spencer, starting in the 1860s, and played a role in the Civil War. But their use continued both as a sporting and military arm, making them an icon of westward expansion.