How happy are you with your riflescope? Before you answer, think about the last couple of years. Have you been... 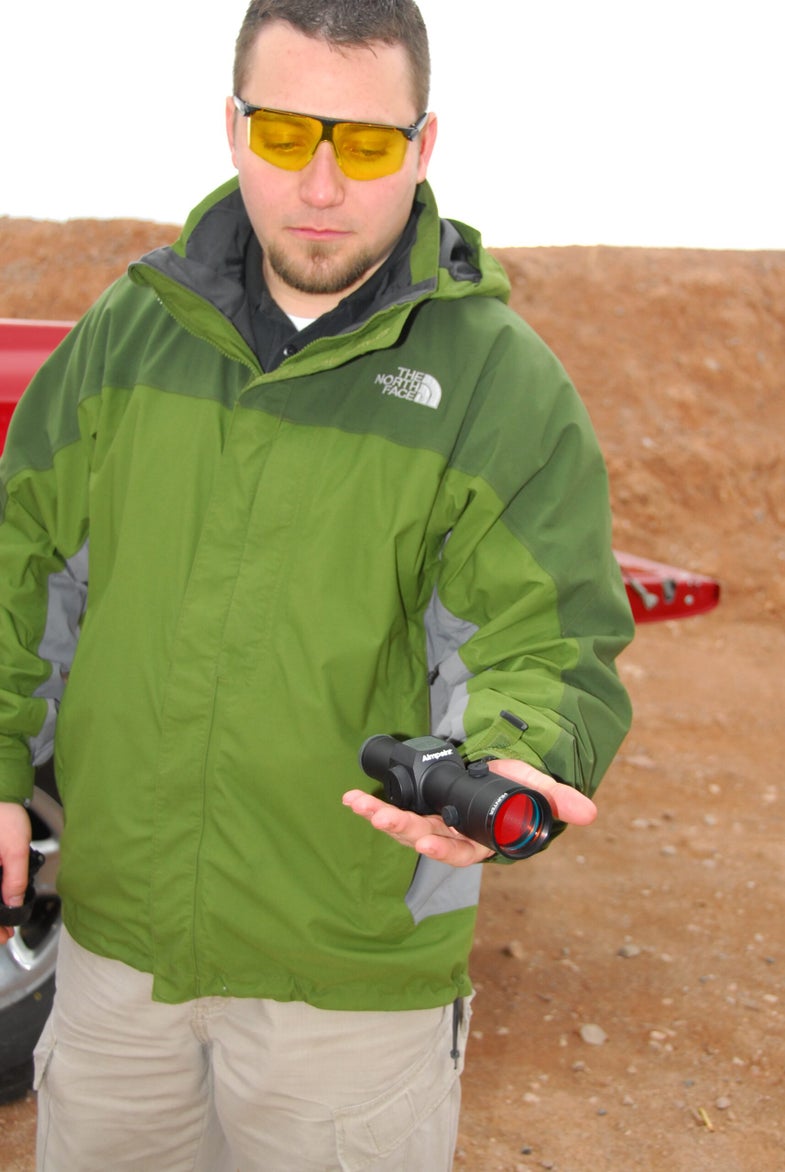 How happy are you with your riflescope?

Before you answer, think about the last couple of years. Have you been jammed up on a shot opportunity because your variable-power scope was on the highest setting? Were you not able to find a close-in deer because you only saw hair at 12x?

I love variable scopes, but most of the time I keep mine at 4x or 6x. It offers the best combination of field of view and magnification, and the middle setting allows me to easily zoom down for closer shots or up for those long-distance pokes.

Aimpoint, the world-leading red-dot sight outfit, wants to change the way you think about magnified sights. Its tiny, versatile H-1 series of red-dots adorns everything from military rifles to turkey shotguns to handguns, even bows. These are amazing sighting devices, capable of providing an illuminated aiming point in sub-zero temperatures, broiling heat, even after being shot, dropped or occluded by snow or mud.

The sights are especially useful in situations where you need to acquire a target quickly. Think a running deer in woodland habitats and personal defense situations. Now, the company wants to put its non-magnified red-dot sight on your deer rifle.

Aimpoint introduced its Hunter line of red-dot riflescopes yesterday at the SHOT Show in Vegas, and it looks nothing like the line of micro sights. Instead, it looks an awful lot like a traditional magnified riflescope, with two mounting rings, a turret that looks like windage and elevation knobs, and an objective lens (47mm) that’s larger than the eyepiece.

The H34L may look traditional, but the new sight operates nothing like the riflescope you probably have on your deer gun. The Hunter doesn’t magnify the target. Instead, it provides a 2 minute of angle aiming point that you use to “paint” the target. The sight will operate for up to five years with a single watch battery, even if you leave the sight on all that time. The Hunter has 12 different intensity settings, which you increase or decrease by a switch on top of the turret.

You might reasonably ask why you need this longer, bulkier sight when the H-1 series serves so many situations so well. The answer is that the Hunter line has the same guts and performance of the compact models. But Aimpoint is betting that its more traditional lines and mounting system will appeal to hunters who fretted that the single mount wasn’t tough enough for big magnum rifles.

“Time after time we have heard that folks don’t like the one-ring mount placed well ahead of the action,” says Aimpoint’s Brian Lisankie. “The Hunter series changes that, and the hook is that once they see how quickly they shoot without magnification, hunters will adopt this sighting method. And when they realize they don’t have to worry about battery failure, we think this will catch on.”

Available in a 34mm tube for now, with a 30mm tube on the way later this year, the Hunter weighs a scant 9.2 ounces and is configured for standard and short actions, with a longer version to accommodate long actions. The sight will retail for $862, but here’s the other revolutionary feature of the Aimpoint: it’s only available from a handful of distributors, including Brownells, Midway USA and SWFA Outdoors.

Will the loss of magnification, but the addition of an illuminated aiming point, change the way you hunt deer, or antelope, or fall bear? That’s Aimpoint’s big bet.