The photo at the bottom of this blog looks like it could have come from the set of a horror... 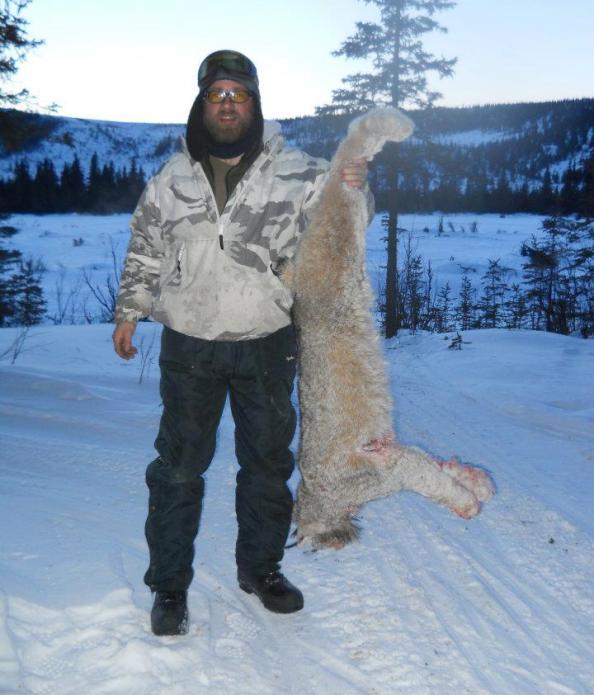 The photo at the bottom of this blog looks like it could have come from the set of a horror movie. But don’t blame Wes Craven: This picture was taken by my buddy, JR, while he was out on his trap line this winter.

One day in early March, JR cut across the tracks of a frantic yearling caribou running down a riverbank out of the woods. The caribou wasn’t alone though. JR could see another animal was putting a paw down every few yards, hanging on in a death grip to the fleeing caribou.

By backtracking, he found out what was taking place, reading the tracks as if it were still happening. He found where the caribou had been traveling along the riverbank, and a large lynx had waited in ambush.

The lynx sprang onto the caribou, and in a fury of claws and teeth, tore at his neck while the caribou desperately tried to break free. Following the tracks across the frozen channels for 300 yards revealed that the caribou had been unable to escape the lynx’s attack. JR found it stone dead, with its neck and face torn open.

As he was looking at the kill, his partner spotted the big tom sitting on the far riverbank, but by the time JR got his rifle, the lynx had walked into the woods. JR quickly followed the tom, running and barking, following the lynx’s tracks trying to tree him.

After about an hour, having covered a mile or so, the lynx made a big circle right back to where the chase had begun, and JR was able to put him down with his .17 HMR. The lynx turned out to be a 28-pound tom: a big cat, no doubt, but not unusually large.   It’s crazy to think that a lynx, could take down a year-old caribou, weighing about 100 pounds, or three times as much as the cat. For scale, imagine taking on a 12-foot, 500-pound guy in a bar fight. What lynx lack in size and strength, they make up for with claws and teeth.

A lynx’s claws are needle sharp, and I’ve cut myself several times while skinning them.
As outdoorsmen, we get to see a side of nature here in Alaska that no one else gets to see, both the beauty and hostility. And as hunters and trappers, we get to participate in the natural circle of life and death.