What are the Longest Turkey Spurs Ever Registered?

Sure a gobbler’s weight will get your attention and beard length is something we all check, but spurs seal the... 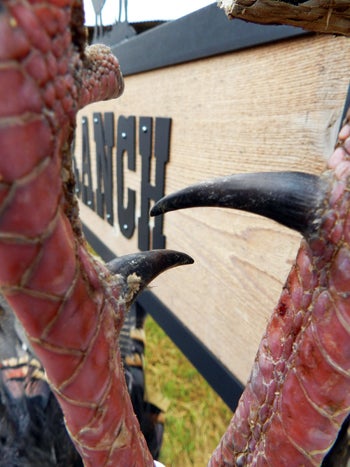 Sure a gobbler’s weight will get your attention and beard length is something we all check, but spurs seal the deal.

My buddy Mike Jordan of Atsko, the Sno-Seal people, killed the Oklahoma longbeard wearing the spurs in this photo. One measured 1 and 9/16 inches and the other taped in at 1 and 3/8s. I was hunting the other side of the Croton Creek Ranch property last month when I heard the shot. Good bird, eh?

The National Wild Turkey Federation (NWTF) keeps records on this sort of thing for those of us who care, and we do. For hunters who register their birds, it’s a way to share trophy statistics about the gobblers we love to hunt. What are the longest registered spurs for each of the four prominent stateside subspecies?

OSCEOLA: Ironically enough, Patton Perdue shot his record registered Osceola spurs in Osceola, Florida. The total taped at 2.1250 inches on April 13, 2008. In fact, 7 of the top 10 came from this particular Sunshine State location.

EASTERN: According to the NWTF, the longest registered spurs for an Eastern wild turkey are 2.2500 inches. Two hunters killed gobblers with those measurements. James E. Lewis tagged his on April 22, 1999 in Franklin, Kentucky. Bill Winn took his in Van Buren, Iowa on May 20, 2001.

What are your longest spurs, Strut Zoners? What subspecies was the turkey? What state did you take it in?