Wolf Tracks: How to Tell If There Are Wolves in Your Woods

With new opportunities for wolf trapping and hunting opening up, more people are keeping an eye out for them. Here... 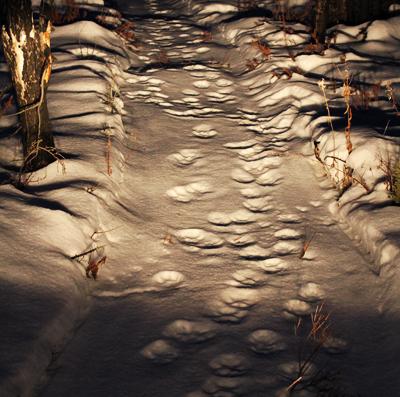 With new opportunities for wolf trapping and hunting opening up, more people are keeping an eye out for them. Here are a couple of tips for finding them and determining if wolves are calling your hunting grounds home.

There are three basic ways you can tell if wolves are near. The first way, of course, is seeing and hearing them on a regular basis. This sounds straight forward, but keep in mind that often wolves can be in an area without being seen.

Kill Sites
A wolf kill is pretty distinct and easy to identify. The area around the kill will usually be packed down with wolf tracks, with multiple trails going into and out of the site somewhat like wagon wheel spokes. Also, there will usually be wolf beds among the trails around the site, as they’ll often rest after feasting. Sometimes only blood and bones will be left, and other times the wolves will eat hardly anything. Often, a pack of wolves will re-visit old kill sites as they travel through their territory, even months after the kill and all the meat is gone. Kills are a sure sign that wolves around around, but like the beasts themselves, there will often be ones that you’ll never find.

Tracks
The best way to determine if wolves are present is to find their tracks. Wolf tracks are fairly easy to pick out, as they can be more than twice as big as a coyote’s. They can sometimes be confused with the tracks of large dogs, but the key is in how they walk. Whether it’s on a packed trail, or through deep snow, a wolf wastes very little energy while traveling. Their tracks are nearly always in a straight line, with the left and right paws only slightly offset (usually 6 inches or less). Compared to wolves, dogs walk like they’re drunk. Their tracks are distinctly scattered, and often appear more “wandering.”

Also, even on hard trails, dogs tend to drag their toes when they walk, whereas wolves generally leave a cleaner stride. In deep snow, distinct tracks are rarely visible. Look for a narrow trail with in-line footprints. When a pack runs through deep snow, they usually step in the same tracks as the wolf in front of them, which leaves even more pronounced prints. Also, you can usually see where their bodies have pushed a trail through the snow. The way they travel often makes it tough to determine how many are in a pack.

If you see or hear wolves, or find their tracks or kill sites, there are obviously wolves in your area, but keep in mind that they might just be passing through. To get an idea of their home range, keep an eye out and note how often you see their tracks. Wolves will establish a set territory, and generally travel a routine circuit, very often running in the same tracks they ran in before. If you consistently see the same sign in the same place, chances are that it’s part of their territory and they are there to stay. Sometimes they will come through once a week, sometimes every three weeks or more. If you see tracks (often from wandering singles), and then don’t see them for another month or so, it was probably just a wolf passing through.