Over the past several sheep seasons, my buddies Steve, Gary, Tim, and I have worked ourselves into a groove of... 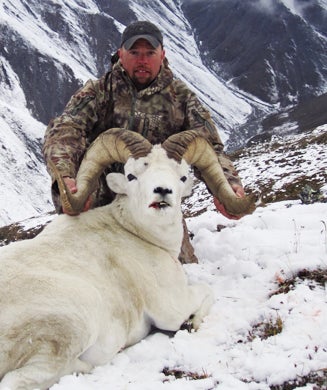 Over the past several sheep seasons, my buddies Steve, Gary, Tim, and I have worked ourselves into a groove of relatively easy success, at least by sheep hunting standards. We’ve had good weather and conditions conducive to limiting out on sheep and being back at the air strip with several days to spare. Our most recent trip, however, taxed us for all of the good sheep hunts we’ve enjoyed.

The weather had been great in Fairbanks before we left, so we were expecting plenty of sunshine, but things started looking bad the day we attempted to fly in. The south side of the Brooks Range was bright and sunny, but when we tried to get over to the north side, we saw that everything was completely socked in with fog. After a couple tries, we had to pitch camp at an air strip on the south side and wait for the next day to try again.

We made it through with clear skies on the following day, and quickly got our gear ready and hit the trail. Within an hour, though, the weather moved back in and began dumping rain on us. Our choices were to either get wet from the rain, or sweat from wearing rain gear, so we just forged ahead. After five miles, we parted ways. Steve and Gary headed for our usual spike camp site, while Tim and I took off up a different drainage with a plan to hook around, come over the top, and hunt the upper basins of a set of mountains we’d had our eyes on for several years. We made it a few miles more, and once the rain stopped we decided to turn in for the night. We spent the whole next day side-hilling up the basin, and after 10 hours of climbing, we ran out of gas a few hundred feet from the top. I’ve camped in some pretty rough spots, but this was the first time I’ve had to dig out sheep beds at 6,300 feet in order to make a spot big enough for my tent.

The following morning we made it through a saddle and were finally where we wanted to start hunting. We spent the next few days glassing down the ridges below, but the fog kept screwing us up. On the third day we spotted three big rams along one ridge, but by the time we made it over there, the sheep had disappeared. We stumbled back into our camp at last light in the pouring rain, cold and soaking wet, which was quickly becoming an all-too-familiar end to our days. On this trip, my normal sleeping bag just wasn’t cutting it. That night, when my uncontrollable shivering wasn’t keeping me awake, I was dreaming that I was back in town for one night, just looking for a warm bed to sleep in. When I woke for good the next morning my tent was distinctly dark and sagging. After pushing the snow off of my tent, I crawled outside to see that about 10 inches of wet snow had fallen. This wasn’t ideal, as we were at 6,500 feet, with a very steep descent to get back down to the river bottom. We couldn’t glass in the fog, so we waited for the snow to melt a bit, and once again packed up our wet tents and camp and started back down to the river.

As we were working our way down a steep creek to the bottom of the canyon, I spotted a ram with two others that we had seen the day before, but because it would have taken so long to get to him, we decided at the time that he wasn’t big enough for the effort. This time, however, we were only 900 yards across the canyon from him, and it was clear he was quite a bit bigger than we had thought. I figured him at 39 or 40 inches — which is a stud — so after the sheep got up and fed across the saddle they were in, we got down to the bottom, dumped extra gear, and raced up the ridge. By the time we got into position, the rams were nowhere to be found. We spent four hours looking for them, but they gave us the slip in the fog. We went back and didn’t make it down to the river till about 1:30 a.m., where we finally set up camp.

The next afternoon, while doing some glassing, Tim spotted a ram about a mile up the drainage on a pretty nice hillside. One look through the spotter was all it took to deem him a shooter: a heavy, deep curling, double-broomed ram that we desperately needed to kill. We ran back to camp and got our gear together, but while we were making our way back upstream, the fog rolled in again. We finally spotted the ram again once we were directly below him, and although the river was raging, we decided to give it a try. I made it across by the skin of my teeth, almost getting swept off my feet. We found a better spot where Tim was able to cross, and we then took off up the hill. By the time we made it to a good shooting position below the ram, the snow was falling hard and everything was quickly turning white. I spotted the ram against some black rocks, but because of the snow I couldn’t get an accurate range. I figured him at 250 yards, and he quickly spotted us. Tim couldn’t see him through his fogged glasses, so I adjusted the elevation on my scope, laid down, and squeezed off a round. At the shot the ram dropped in his tracks and then rolled down the hillside and into a gully. My heart sank when we made it up there 15 minutes later and there was no ram. We looked until dark, then had to head back to the tent.

We were snowed in the tent for a whole day after that, and were grateful to see the sun on the second morning. We got a fire going in the 10 inches of snow that had fallen in order to thaw out our boots, and after an hour or so, Steve came walking into our camp. He had been stuck in his tent for the better part of a week, but Gary had taken a nice ram a few days before. On the only other day he could see, he watched an enormous ram that we had been chasing for four years, but it was across the river, which was too swollen to cross safely. As the snow began to melt off, Steve took off up the drainage and we returned to look for the ram I had hit. We looked all day, climbing all over that ridge. Between help from the birds and ample daylight, if that ram was dead we surely would have found him.

Unfortunately, there was nothing. We found one tiny spot of blood on a rock, and followed a trail of hair where he had rolled, but it disappeared after 30 yards or so. We finally came to the conclusion that I must have nicked his back, shocking him, and that he got up and ran off. I’ve heard of this happening to a few guys I knowa€”one of them shot the same sheep the following year. As sick as it made me to lose him, there was no other conclusion but that he had survived the hit.

While we were looking for that ram, Steve had spotted a group of rams with two bruisers about four miles farther up the river. The following morning we made our way up there with the hope that Steve and Tim would have cracks at the two big ones. Luckily they were still on the same hillside. Once again it started snowing, and we spotted three more rams about two miles up the canyon. Through the snow we could tell that one of the rams was definitely legal, so I split off and hustled in hopes of getting a second chance. I made it to about 1,000 yards from the rams when the snow stopped. I was exposed, so I made my way out of sight and up a parallel ridge. After about 45 minutes, I crested a saddle and saw I was only 300 yards from two bedded rams. I wasn’t sure if one of them was the big ram we had seen, but one of the two was definitely legal. With the last day we would be able to hunt quickly fading away, I decided to shoot him. I adjusted the CDS dial on my Leupold scope and settled in for the shot when I heard two shots from down the canyon. I quickly fired a 140-grain Hornady A-Max out of my 6.5 Creedmoor and through the ram’s ribs, and my hunt was over. We met back up at 1:00 a.m. where we had parted ways, and started the long walk back to camp as it began to snow again.

We were so tired that we would nod off every time we’d sit on a cut bank to rest, but finally made it back to camp at 8:30 am. After a day of resting, we began the 18-mile pack back to the air strip, only to find that a grizzly had eaten all of Gary’s sheep and the meat from a caribou he had taken. We’d seen about 13 bears in all, but Gary had had several close encounters, and was even charged three times by a huge boar. We stumbled into the air strip at 2:30 a.m. on the morning we were to fly out, and I’ve never been so glad to be back.

We saw the sun for only the second time in two weeks that morning as we waited for the plane. We had again managed 100-percent success, taking four good rams in 14 days. We definitely earned these rams, with Tim and me putting more than 100 miles on our boots. As miserable as these hunts can be, the animals you really have to earn are the ones that are the most fulfilling in hindsight. I’m already excited to go back.