Hunting Tips: How to Hunt Bobcats

Whenever a fresh, midnight snow falls on Michigan’s Upper Peninsula, you can find Ron Edgerly out before dawn, prowling back... 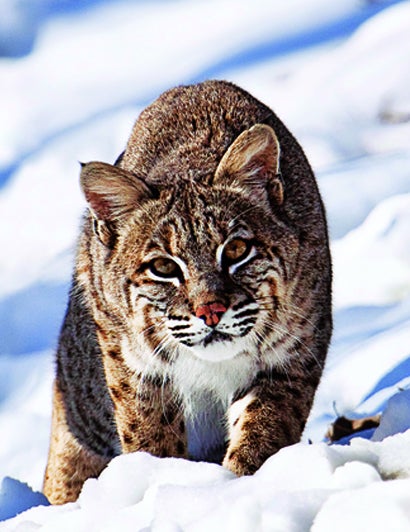 Whenever a fresh, midnight snow falls on Michigan’s Upper Peninsula, you can find Ron Edgerly out before dawn, prowling back roads looking for fresh bobcat tracks. “Last year, I called into shotgun range my biggest ever–a 40-pounder–after tracking it for two and a half hours,” says 73-year-old Edgerly. On his pre-dawn hunts, he looks for a precise combination of factors.

1. The Weather
When targeting a predator with a typical home range of anywhere from 25 to 36 square miles, simply finding the animals is the biggest challenge for most bobcat callers. That’s a problem solved by a little fresh snow.

“Locate the thickest cover in an area with a good rabbit population, and then find a road or snowmobile trail that runs through it,” says Edgerly. “After a night of snow, drive those roads in the early morning before the plow truck gets to work. If you find where a bobcat crossed the road, you know that trail is fresh.”

Be careful not to slam any doors, and begin following the trail slowly but steadily. Bobcat tracks that appear to randomly meander through the woods–stopping at every bush and brush pile–indicate a cat that is on the hunt, according to Edgerly.

“If you’re lucky enough to find where the bobcat made a kill,” says the Michigan hunter, “then that cat is going to be close. Even a bobcat with a belly full of rabbit or venison will come to the call.”

2. The Setup
Edgerly always makes his first calling location within 200 yards of the road. Since a bobcat will rarely bed in the open, Edgerly looks for a spot with good visibility that’s also close to dense cover.

“Stand when calling–never sit–with your back up against a tree in a place where you can see 360 degrees,” Edgerly says, adding that in the swamps where he hunts, “great visibility” might mean only 35 yards. “If nothing responds, pick up the trail, move another 200 yards, and try again.”

3. The Tactic
When Edgerly is on a trail, he packs a handful of shells (3-inch, No. 4 buckshot) and a Steven’s double-barrel 12-gauge, sawed off at the legal 20 inches. While any mouth call will work, Edgerly prefers an electronic caller–FoxPro’s FX3 caller–­coupled with a Mojo Critter motion decoy.

In tight cover, place the electronic call and decoy 20 yards from your position. Wind direction doesn’t matter, as bobcats are sight hunters. An incoming cat will stalk and steal into range, sometimes sitting and watching for the source of the distress call for up to an hour before making a move.

“Ninety percent of callers fail because they can’t sit still, and they get spotted by an animal they never see,” he says. “They also call too much and use too much volume.” In the real world, a rabbit in distress doesn’t emit ear-splitting bawls uninterrupted for 45 minutes on end. Edgerly strives for realism by letting the call play at a soft to moderate volume for a maximum of 30 seconds. If the human ear can hear the call at more than 75 yards, says Edgerly, it’s too loud.

“After 30 seconds I’ll mute the sound for one or two minutes, then repeat the series five or six times–for around 20 minutes total–before moving another 200 yards and setting up again.”

Continue this run-and-gun cycle until you either get the cat or tire of the chase. Edgerly took four bobcats (and 19 coyotes) in his best season using this method. But, he insists, none of the cats came easy.

“If you ever see a man coming out of the woods with a bobcat over his shoulder,” he says, “you should stop and shake his hand, because that man has really done something.”