After getting married in April, my wife Faith and I decided that an exotic tropical honeymoon just wasn’t for us.... 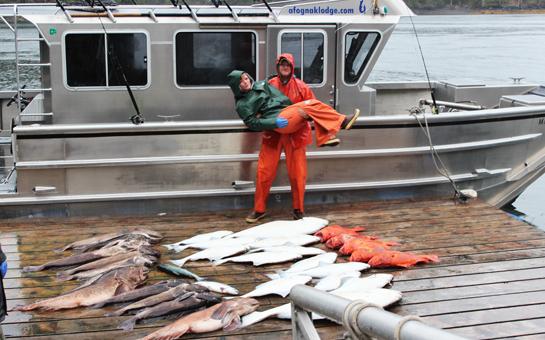 After getting married in April, my wife Faith and I decided that an exotic tropical honeymoon just wasn’t for us. We did have the perfect place in mind, though. A place that regular Live Hunt readers know that I cherish: Afognak Island.

After arriving on the island and getting settled into our very comfortable cabin at Afognak Wilderness Lodge, run by the Randall family, we were presented with an all-too-familiar problem I’ve encountered on Afognak—deciding what to do first. Among our options were offshore fishing, salmon fishing, bear viewing, and whale watching. We decided to hit the deep fish first, and within 30 minutes of leaving the lodge we were hammering the halibut and lingcod left and right.

The fishing off of Afognak is as good as anywhere in Alaska, and can make the famous Prince Williams Sound look like a wasteland. Although most of the bigger halibut hadn’t moved into the area yet when we were there in late June and early July, one of my friends from Fairbanks, Rob, boated a 140-pound fish. No matter where we went, it seemed like we couldn’t keep the fish off our hooks. By the end of each day, our arms were so locked up and tired from reeling that we were praying we wouldn’t hook into a big one. We caught our limit every day, and on the best day we caught and released nearly 200 fish. There was one spot in particular where we brought up six lingcod, each over 50 pounds, in less than 10 minutes!

Although halibut and lingcod are the bread and butter of offshore fishing here, we caught a wide variety of rockfish, too, including big yelloweye and black rockfish. Much to my buddy Luke Randall’s surprise, we caught three tiger rockfish, the rarest type out there. They usually only catch one every year or two, but we found three in just a couple of days! We also caught a China rockfish, which are small, but beautiful with yellow striping on their black bodies. Finally, Faith caught a quillback rockfish, which are similar to a China, but bigger, and have huge dorsal spikes.

The fun wasn’t limited to the fishing, as several times there were pods of humpback whales and Dall’s porpoises surrounding the boat. We also had the pleasure of seeing many sea birds, like puffins, which added to the already awesome experience. One day, we took a hike up a salmon stream to see if there were any bears, and luckily for us, a young boar came down to fish shortly after we arrived. It’s pretty cool to watch them submarine under the water looking for fish 15 yards from where you’re standing. This one wasn’t too sure of us, though, and kept peeking up from his fishing hole to make sure we weren’t trying to sneak up on him.

All in all, it was a fantastic week, and the best honeymoon Faith and I could have hoped for. I had a great time fishing, sea kayaking, and viewing the wildlife with my wife. An epic Fourth of July barbecue and party with great friends was icing on the cake. I’d be lying if I said I could recommend a better summer trip anywhere else in the world. If you want to plan your own trip to Afognak Island, check out the Randalls’ Afognak Wilderness Lodge, www.afognaklodge.com.