Stories From Alaska: Almost Ambushed By a Brown Bear

This May I’m headed for the Alaska Peninsula to spot, stalk, and shoot a brown bear with a recurve bow... 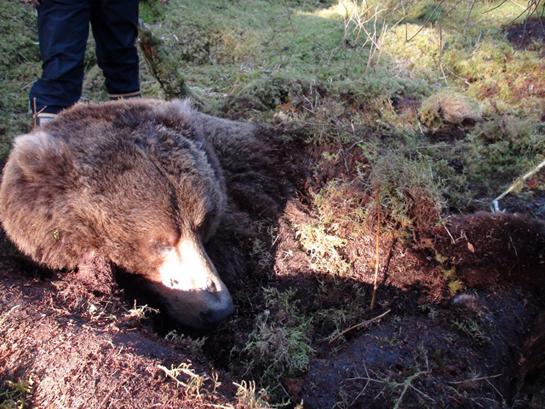 This May I’m headed for the Alaska Peninsula to spot, stalk, and shoot a brown bear with a recurve bow (you’ll be able to find full coverage of this trip on Live Hunt). As I get physically and mentally prepared for this hunt, I can’t help but think back to some of the bear stories I’ve heard.

The southern coast of Alaska, loaded with toothy predators the size of Volkswagens, is where bear stories are born. My friends Luke and Josh Randall of Afognak Wilderness Lodge have no shortage of these stories, as they have been guiding and hunting some of the largest land predators in the world for most of their lives. When I was down at the lodge hunting deer last December, Luke told me one such story that would send shivers down any hunter’s spine.

The hunt started out normal enough …

After some hard glassing, they found a good bear, and were able to get the client in for a shot. BOOM! But it was just before dark, and they were unsure of the shot placement. After seeing the bear go into the brush, they decided to wait until morning to finish tracking him down.

When they returned the next morning, they followed his trail up through the trees and thick devil’s club. When they finally found the bear, they realized that their decision to wait until morning could have saved their lives.

The bear had fled through a thicket of devil’s club, and circled around to within a few yards of the trail he had taken up the hillside. The big boar then buried himself in moss until only his head was visible. He was facing back down his trail, the trail that Luke and Josh would track him on. Luckily, they found the bear dead, but rigor mortis hadn’t even set in yet. The wounded bear had waited in ambush for most of the night before succumbing to his wounds.

In the end, it all worked out and nobody got hurt, but this story goes to show how smart and tough these brown bears are. My uncle guided bear hunters on Kodiak and his piece of advice is this: “little bears die easy, big bears die hard. An animal that can live more than 20 years isn’t stupid.”

Of course things don’t always go like we hope they will, but anyone who plans on hunting brown bears should be ready to make a good shot when it counts.