Glofish the Next Sushi Fad?

Let’s file this story under … Well, I’m not sure what to file it under. It’s just too weird to... 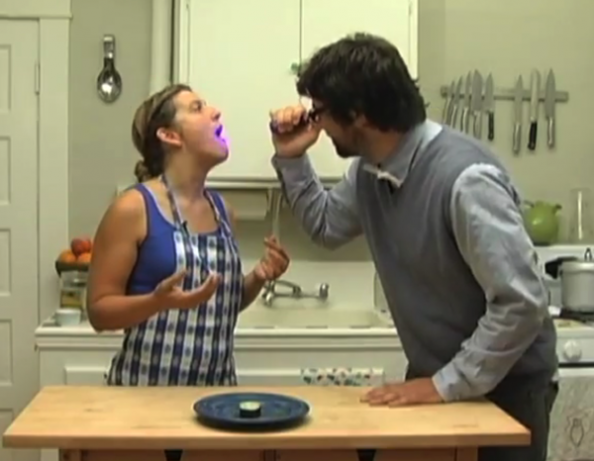 Let’s file this story under … Well, I’m not sure what to file it under. It’s just too weird to categorize.

A new website is promoting the culinary fad of glowing sushi. That’s right: sushi that glows in the dark. And on your teeth!

The sushi glows because of a brand of genetically modified (GM) fluorescent zebrafish sold by Yorktown Technologies known as glofish.

These fish were originally developed to help scientists study environmental pollutants. According to the plan, the GM fish would glow in contaminated waters. Although this plan didn’t pan out – go figure – the fish have done well in the pet trade. The fish are available in Starfire Red, Electric Green, Sunburst Orange, Cosmic Blue, and Galactic Purple. The gene that causes the fish glow deteriorates when the fish is cooked so it must be consumed raw (if you want it glowing). Enter the sushi idea.

Glofish are added to sushi whole or minced or whatever else sushi chefs do to make beautiful nuggets of raw fish and are utilized in such aptly named dishes as “kryptonite roll,” “stop and glow nigirizushi,” and “not in California roll.” The latter is a reference to the fact that the fish aren’t available for purchase in California. Visit the website for recipes and instructions. Also, be sure to check out how the team is currently developing recipes for, I kid you not, glowing mice!

Sushi that involves dicing up scientifically modified pet fish? Would you eat some glow in the dark raw fish? Comment below!