This is the best fishing story EVER! Yes, ever. Nothing can top this. I’m convinced. Charlie Dostounis of New Zealand... 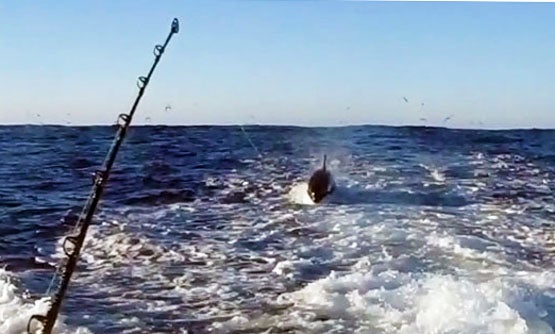 This is the best fishing story EVER! Yes, ever. Nothing can top this. I’m convinced.

Charlie Dostounis of New Zealand was fishing with friends this past Saturday when he hooked into a killer whale.

Dostounis and crew were trolling for tuna 40 miles off Gisbone when they hit a boil of the fish shooting skyward. Page told Fairfax NZ News that they noticed a pod of five orca around the same time. “We had a couple of inquisitive ones start being nosy,” fellow fisherman Rob Page said.

“One in particular started following us.” Skipper Robbie Lewis said one orca “porpoised” behind the boat for a time before suddenly lunging after a hook and running with it. “I’d had a couple of energy drinks by that time and I thought I was hallucinating,” Lewis said of the line screaming off the reel. “I wasn’t hallucinating. I’ve never heard of it, and I’ve done a lot of fishing. To see what we saw was unbelievable.”

Dostounis grabbed the rod but the reel spooled out to the tune of 800 meters — about 2,600 feet. The men considered cutting the line but felt it better not to let loose that length of heavy nylon dragging behind the hooked whale. Dostounis played out the whale for 45 minutes before the trace line snapped.

As incredible as this may sound, orca expert Ingrid Visser told the Fairfax NZ News she knew of two other instances where killer whales had gotten hooked by fishermen. “They’re incredibly smart animals,” she said. “There are records of them taking fish off longlines … They come up carefully, take the fish by the tip of the tail and pull them until they pop off the hook, so they do understand the concept of hooks to some degree.”