Can’t wait until the August 14 release of Jaws on Blu-ray DVD to watch a monster-sized great white shark target... 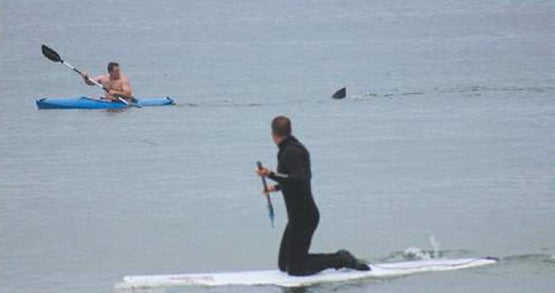 Can’t wait until the August 14 release of Jaws on Blu-ray DVD to watch a monster-sized great white shark target swimmers off the northeastern United States? Well then head on up to Nauset Beach off Cape Cod — very close to where the iconic movie was filmed — to see the real thing in action.

An estimated 14-foot great white shark was seen following kayakers and coming much too close to swimmers in the surf of Nauset Beach Saturday afternoon. Orleans Harbormaster Dawson Farber wisely had everyone exit the water once he confirmed the sighting.

The first sighting came from summer visitor Shelly Negrotti who photographed the shark trailing two kayakers less than 50 feet from shore. Kayaker Walter Szulc Jr. told NBC affiliate 7 News in Boston about the encounter. “So I looked behind me, and that’s when I saw the shark; it was pretty much right there,” Szulc said. “It was good-sized, it had a fin sticking out, so I just turned and paddled.”

Szulc added that the shark was maybe seven to eight feet behind him most of the time. Although swimmers were told to exit the water at 3:00 PM some were seen returning — against orders — only three hours later. Beach visitor Karen O’Connell said, “Everyone wanted to see it. There were people running toward it.” O’Connell’s daughter Grace said she was “psyched” about seeing the fish. Although there have been three shark sightings in the area since June 30, locals are quick to point out that there hasn’t been a shark attack on a human since 1936. The increase in sharks is believed to be because of the increase of seals in the area.